Cristiano Ronaldo for Portugal is a very different beast to the preening CR7 of Real Madrid who peacocks his way around La Liga and the Champions League with such unfathomable amounts of narcissism you feel he must be in on the joke.

In the colours of the national team, he appears a more refined, statesmanlike and even modest iteration of himself.

He remains an outrageously-effective goalscorer but there is a greater desire to work for the collective, the histrionics with his team-mates aren’t there and there is an awareness that the shirt stands for much more than him.

In fairness to Ronaldo, it’s been like that for the majority of his career. Such is his gravitas, he could assume an authority, especially at the age of 33, except for Portugal it’s as if he’s ‘just one of the lads.’

[This video from last year shows Ronaldo's evolution as a player]

A team of contradictions

But Ronaldo’s restrained ego represents just one of the strange contradictions at the heart of this team. Fernando Santos is blessed with some of the best and most exhilarating attacking players in world football yet leans on a defence whose centre-backs are well past their peak.

Can you imagine Ronaldo being satisfied with Real Madrid grinding out 1-0 wins anchored by a 34 and 35-year-old? Yet, in deep red he is content with this strange logic.

Of course, it was Santos’ methodology that brought Portugal their first ever international tournament triumph, winning the 2016 European Championships by scoring just one goal or fewer in five of their seven matches.

And it’s a mindset that’s been maintained in Russia. Despite Ronaldo’s three-goal salvo in their thrilling 3-3 against Spain, Portugal grafted their way to a 1-0 win over Morocco and 1-1 draw against Iran to book a last 16 tie with Uruguay on Saturday.

Santos’ side rank 20th for scoring attempts per match with 11.0 and 32nd for xG per game with 0.41. Not Saudi Arabia, Costa Rica or Panama – Portugal. Cristiano Ronaldo’s Portugal.

What’s odd is that it’s a departure from what they were producing in qualifying. In a group also including Switzerland and Hungary, the Portuguese led all 210 countries attempting to reach Russia with 22.8 shots per game.

Tournament football is vastly different to qualifying as one bad result can send you in a tailspin you never recover from, although it’s admirable that Santos is able to switch on either approach depending on the scenario. However, it all seems a huge waste.

Defence is the best attack

Pepe and José Fonte are as important, if not more, than Ronaldo. Santos’ Portugal is of William Carvalho and Adrien Silva, not Gonçalo Guedes and Bernardo Silva.

Guedes was one of the most exciting talents in La Liga last season yet has largely been reduced to playing as a defensive forward, assigned with pressing the opposition defence. For Valencia he averaged 3.0 completed dribbles, for Portugal it’s been just 1.1.

Bernardo’s magical feet have been strapped together as he’s yet to play a single key pass across 148 minutes; for Manchester City last season in the Premier League he averaged 1.8 per 90 minutes. He’s also generally less involved in play, averaging 23.2 fewer passes for the national team.

The same is also true of midfield metronome João Moutinho whose 60.8 passes per 90 for Monaco in Ligue 1 towers over the 37.5 he’s averaged for Portugal.

This is all confirming what we already know – that Santos has the handbrake on many of his most creative outlets, placing emphasis on two main areas: Ronaldo and, as a secondary option, left-back Raphaël Guerreiro.

Guerreiro’s 2.0 successful dribbles per 90 is only beaten by super-subs Ricardo Quaresma and Gelson Martins – although the former may start against Uruguay – while Ronaldo’s activity, despite his changed demeanour, isn’t that far removed from what he does for Real. 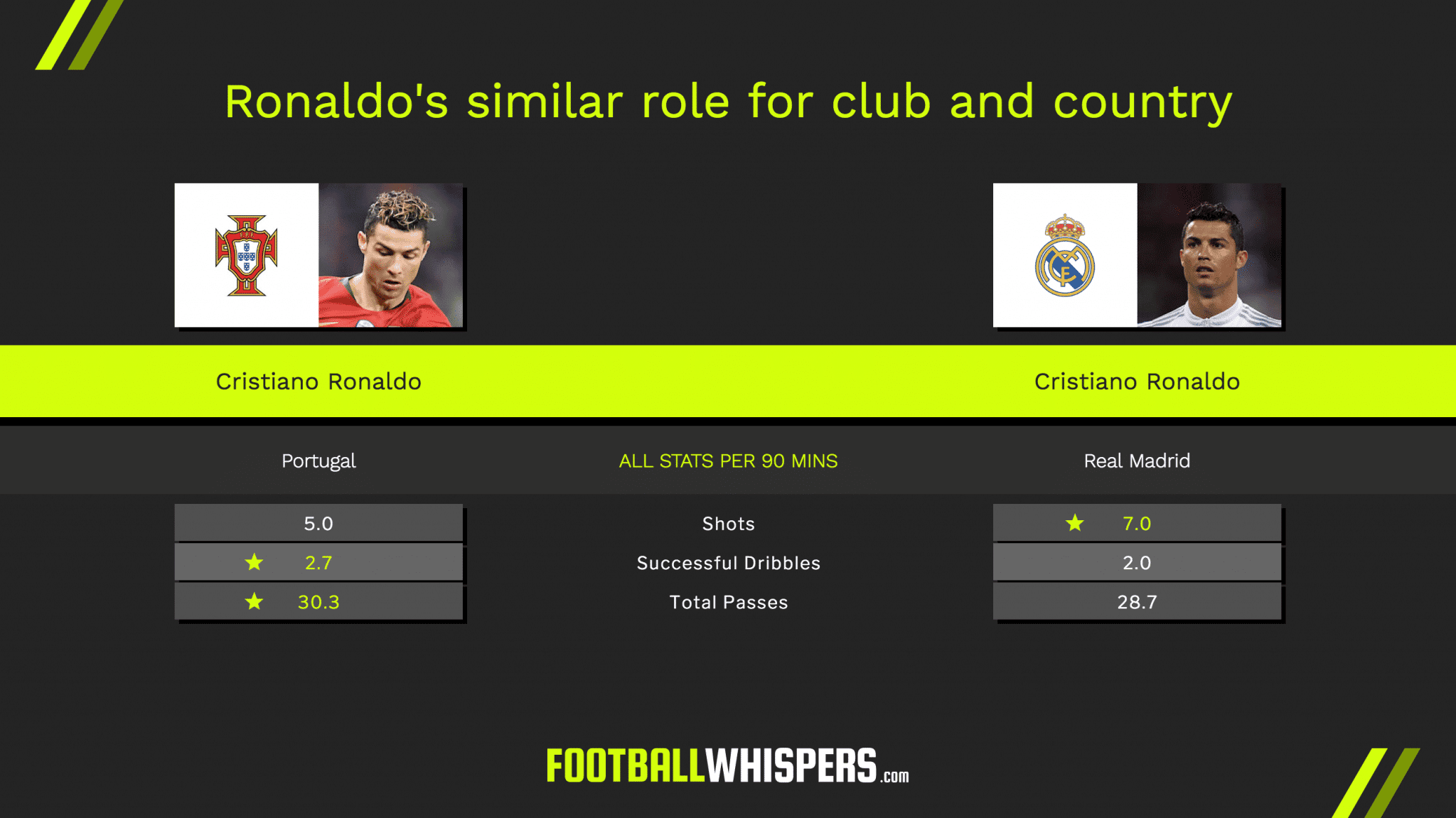 Results are what matter

The fundamental argument is that, ultimately, it produces results. Portugal have achieved their ambition and progressed into the knockouts.

Except, for all their fighting qualities they could so easily have lost against Spain, Morocco was a glorified 0-0, and Iran may well have been a different result had the Persians had a little more refinement in the final third.

Against Uruguay, with Diego Costa twisted his way past them as ‘Exhibit A’.

Added to that is the strength Uruguay possess in defence. José María Giménez and Diego Godín have transferred their outstanding club form for Atlético Madrid into the World Cup and made the South Americans essentially the international embodiment of Diego Simeone’s Los Rojiblancos.

Uruguay and lead the tournament for fewest scoring chances conceded with 6.33 along with Brazil and are second for xG conceded on 0.33.

There is a slight caveat given that their opposition has been Egypt, Saudi Arabia and Russia but this is merely a continuation of what Gimenez and Godín have been delivering at club level.

Just relying on Ronaldo and a few bursts from Gueirrero may not be enough for Santos. They will have to force the issue.

The form book suggests this game will be a scrap. A Battle of Santiago for 2018 in which play-acting on both sides will be met with considerable physical retribution and the yellow card and foul count could be more lively than any goalmouth action.

If Santos wants he can engage in such a war and try and grind out that win. But Uruguay are among the toughest and most resolute sides in world football. Maybe, just maybe, it’s time to let Guedes and Bernardo off the leash and let them work some magic.