When you think of Pep Guardiola's perfect defensive midfielder, you think of a player with a split personality.

In possession, they’re neat and tidy. Without the ball, they’re masters of the dark arts. At

With the Brazilian not getting any younger, Manchester City broke their transfer record to sign Rodri. The Atlético Madrid destroyer was viewed as the heir to Fernandinho’s cynical crown and, while he’s still adapting to England, you can see why the champions went big on the Spaniard.

Given all of the above, the reports from Italy claiming City sent scouts to watch Sandro Tonali recently lead to a few raised eyebrows. The Brescia playmaker is the polar opposite of a typical Guardiola defensive midfielder. In fact, he doesn’t fall into any of the midfield categories used by the Catalan tactician.

The 19-year-old, tipped by many to fill the Andrea Pirlo-shaped void in the Italian national team, is a great prospect. He’s been linked with Juventus, Internazionale, Liverpool, Manchester United and Real Madrid previously – all before he’d even kicked a ball in Serie A.

Now pulling the strings for Brescia in the Italian top-flight, Tonali’s list of admirers appears to be growing by the week. It's easy to understand why.

The one-cap Italy international is a throwback. He struts around the middle third, picks the ball up and arrows long diagonal passes into the feet of his forwards or into space for team-mates to attack. 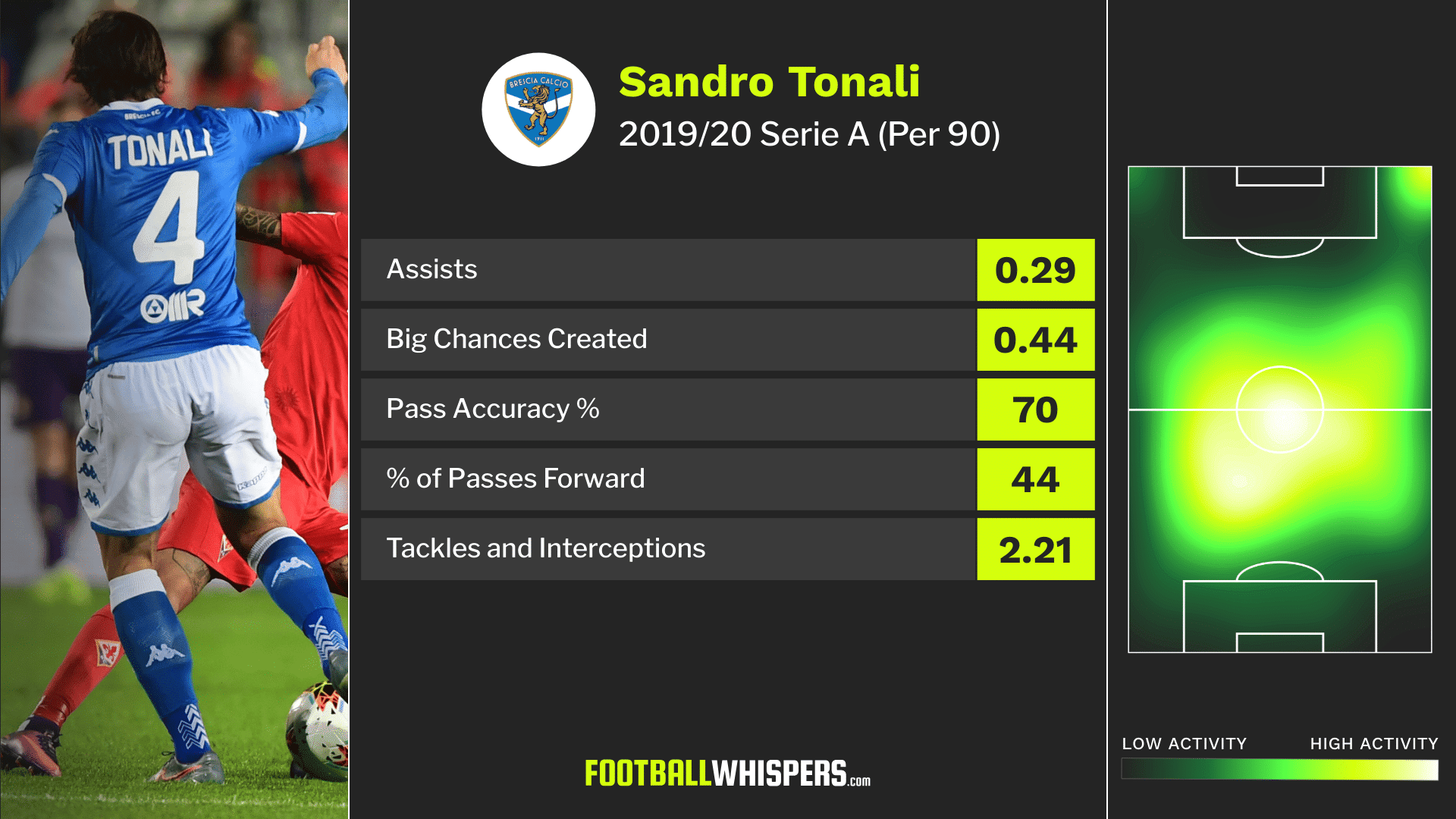 Unlike many modern-day midfielders, he's a risk-taker. This is apparent when looking at the number of passes he attempts to play forward. Of the 40 he attempts on a per-90 basis, 44 per cent are aimed forward. For context, an average midfielder in the English top-flight attempts around the 22 per cent mark.

For context, only 35 per cent of Serie A maestro Miralem Pjanić‘s passes go forward.  Even taking into account the different styles of the two teams, what Tonali is doing is quite remarkable. A proactive ball-player operating in the defensive third. It's almost unheard of these days.

He's assisting, he's creating chances for team-mates and he's busy doing the defensive side of things. Tonali is also a set-piece expert and regularly takes free-kicks and corners for Brescia.

The other side of the coin, however, is that he is reckless. He only completes 70 per cent of his passes meaning he's responsible for a high number of turnovers. Obviously this comes with the territory of playing risky passes. But most top teams don't want such risk in their ranks. Especially not a team managed by Guardiola.

Extra lessons are required if Rodri is to follow in Fernandinho’s footsteps and graduate from Lord Guardiola’s School of Dark Arts ??#mancity#Guardiola#Rodri#Fernandinho pic.twitter.com/NXMKnJVFPV

City play a patient style, often looking to grind the opposition down. They rely on retaining possession and amassing an eye-watering amount of passes per 90. Even their more expressive players, like Kevin De Bruyne and David Silva, only average 25 per cent of their passes forward. İlkay Gündoğan has averaged 19 per cent this season while Fernandinho, deployed at centre-back on occasion, averages 22 per cent.

It's difficult to envisage how Tonali fits into Guardiola's current plans.

The Italy international could tweak his game and take over from Gündoğan as the team's metronome. But there's no guarantee he'll be as good or as effective without that more expressive side to his game.

Guardiola, however, might have a plan for Tonali. One which sees him flourish at the Etihad. He's created masterpieces with much less to work with in the past, he's hardly going to go wrong with a player with this much ability. In some instances, the Brescia man shares traits with compatriot Jorginho.

The Chelsea man was a target for City before his switch to Stamford Bridge which suggests the former Barça coach does see his side playing with a deeper playmaker. It could be the next evolution for his side.

One thing is for sure. If Guardiola signs off on the club going big on Tonali, he knows exactly how he's going to use him and that can only be bad news for the rest of the Premier League. The wonderkid could be his new Alonso.