It’s not often a player turning out for a team that sits bottom of their Champions League group attracts the attention of Europe’s elite clubs. But Genk midfielder Sander Berge, according to various reports, is one of the most in-demand players in the world right now.

So far, the Belgian side have one point from the 12 on offer in Group E. They lost 6-2 to Liverpool across two matches and 6-2 to Red Bull Salzburg in the game that announced Erling Håland to the masses. They did, however, manage to claim a draw against Napoli.

While results haven’t been anything to write home about, Genk's performances have been admirable. Many of their players have impressed in their own right, with Mbwana Samatta one of the names mentioned by the media as a potential transfer target for Premier League clubs in January.

But it’s Berge who has used the platform of Europe's biggest stage to improve his standing in the game. The 21-year-old especially caught the eye at Anfield. Liverpool didn’t field their first-choice XI but that shouldn’t take anything away from the Norway international’s performance in the middle third against the reigning European champions.

Many top clubs have been aware of Berge for quite some time but his impressive showings in the Champions League suggest he’s now starting to deliver on his early promise.

Born in Bærum, Norway on Valentine's Day 1998, Berge was destined to have a career in sport. Both his parents and older brother have played basketball for Norway while his grandfather, Ragnar Berge, was a professional footballer who was capped once by Norway and played for Valerenga.

He came through the youth system of Asker and made his debut for the club, then in the Norwegian third tier, in 2013. He immediately stood out and it wasn’t long before Valerenga made their move and brought him to the club.

The 6ft 5ins maestro immediately caught the eye and it felt like a matter of when and not if he’d move on to bigger and better things.

To the surprise of many, however, it was Genk who secured his signature. The Belgian side were flush after selling Wilfred Ndidi to Leicester City and needed someone to replace the Nigerian in their middle third. They paid around £1.7million to secure Berge's signature.

As a proving ground, the Belgian club is one of the best around: they’ve helped develop some of the biggest stars in the world today. 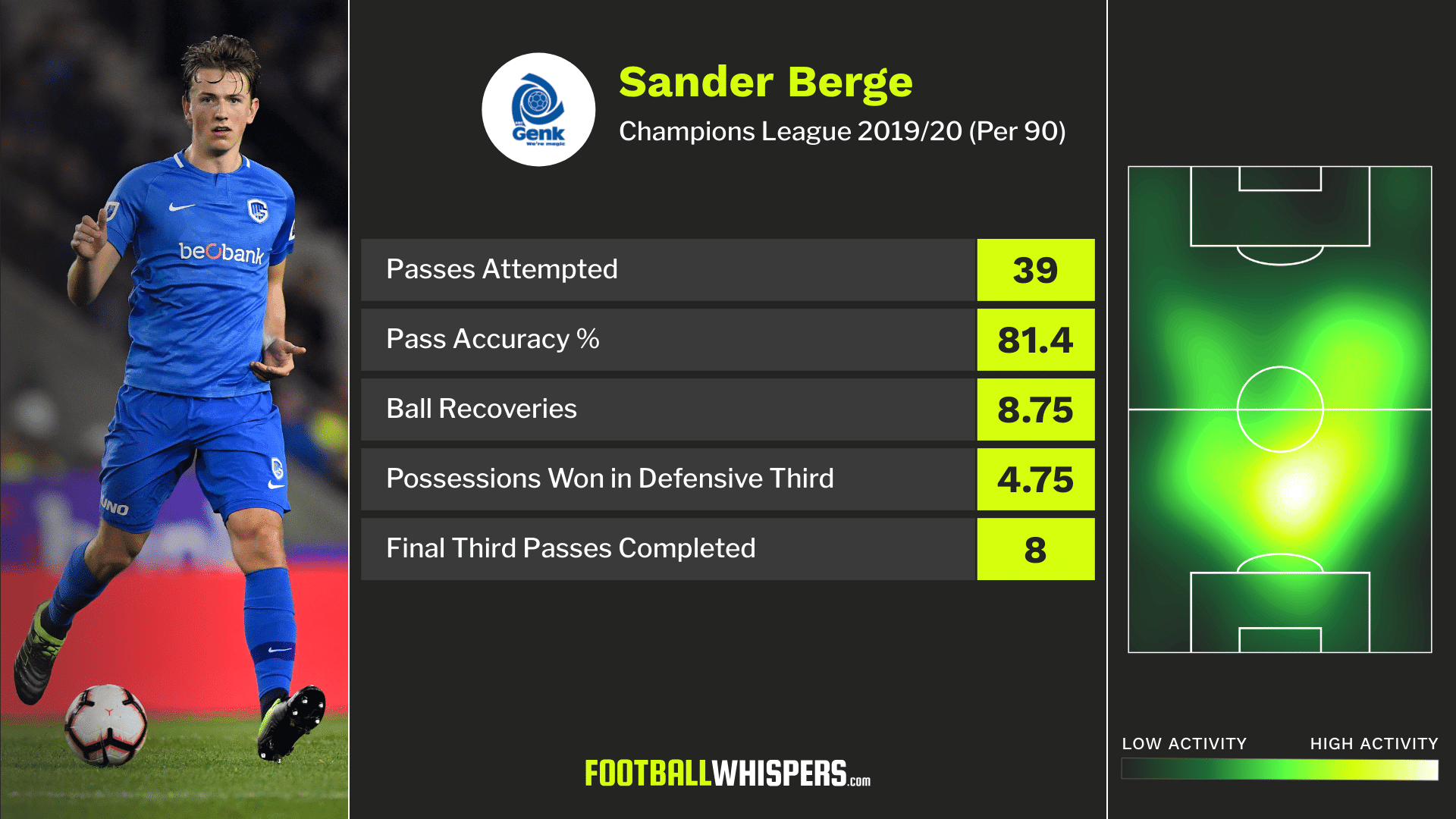 , Chelsea, Liverpool and Napoli are all keeping tabs on the midfield powerhouse with his rumoured release of just £20million an attractive option.

“Napoli are interested in Sander, it's a possibility a deal could be done,” Dimitri De Conde, Genk’s Sporting Director, told Radio Punto Nuovo. “We also know that Liverpool are interested and [Jürgen] Klopp, after the game at Anfield [in the Champions League], complimented him on his performance.

“There are clubs in Italy who are following Berge and Napoli could be one of them, but at this stage, there are no offers on the table. From next week, things could change. We haven't had any official contact with Napoli yet.”

The player himself praised Liverpool following on from their Champions League clash at Anfield, sparking speculation he could well favour a move to Merseyside: “Playing at Anfield is a dream for everyone in the world, and not least for Norwegians,” Berge told TV2.

“Liverpool are the best team [at the moment] and have the most fans. ‘So I would certainly like to play at Anfield as often as possible.”

The Premier League leaders have Fabinho patrolling the middle third at the minute but the current squad is missing a player who could stand-in for the Brazilian. Berge would fit the bill.

EXPLAINED: Why Fabinho might just be Liverpool's best signing under Jürgen Klopp.

A man of many talents… and nicknames. ? pic.twitter.com/PbDE4hYwF5

Against tough opposition in the Champions League, the 21-year-old is completing 81.4 per cent of his passes, is recovering the ball close to nine times per 90 and he’s regaining possession in the defensive third close to five times.

Chelsea could view him as a potential successor to N'Golo Kanté, with the World-Cup winner perpetually linked with moves to Real Madrid and Juventus. While he's one of the best in his position, the former Leicester City midfielder has struggled with injuries this term yet the Blues haven't seemed to miss him that much. Perhaps cashing in on him wouldn't be the end of the world.

The truth is, Berge has the sort of profile which makes him seem readymade for the Premier League. Not only is he a physical presence who does the dirty work, but he's also a ball carrier, completing over 50 per cent of his dribbles in the Champions League, as well as having the guile required in the middle third to make things happen.

His release clause is believed to be £20million. A drop in the ocean for top European clubs with very little risk attached with the midfielder's potential bordering on world-class. Under the right manager in the ideal environment, he could thrive.