Jadon Sancho and Callum Hudson-Odoi make for an interesting juxtaposition in the England squad.

The narratives around the pair are two sides of the same ‘young player, potential superstar’ coin. Sancho is playing regularly in the Bundesliga, his 12 assists leading Europe’s major leagues along with Lionel Messi. Hudson-Odoi (in fairness, half a year younger, which matters at that age) has been denied opportunities in a stumbling Chelsea side.

As The Times’ podcast raised this week, it’s virtually unprecedented for a player to be called up to the senior England squad without having started a league match. Theo Walcott is the usual go-to example of ‘too-much, too-young’ on the international level, but he’d made over a dozen starts for Southampton by the time he was called up for the 2006 World Cup.

Hudson-Odoi and Sancho raise the now-familiar questions of just what young players should do, and whether their clubs give them enough support. 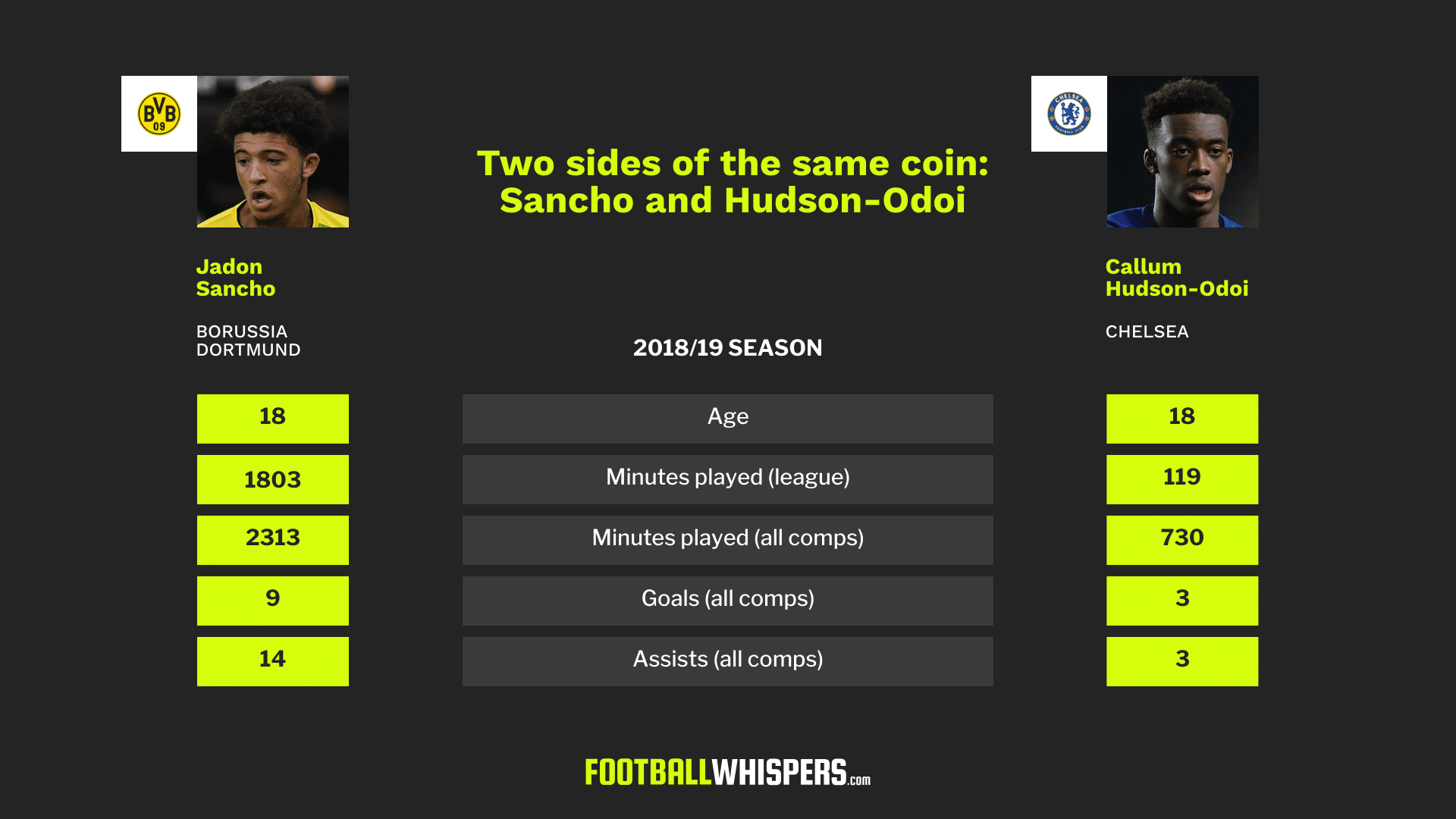 England’s current men’s national team is full of players who currently play, or made their breaks, at teams outside the big guns.

The youngsters who made breakthroughs at bigger clubs — Raheem Sterling, Marcus Rashford, Harry Kane and Dele Alli — have something else in common.

When Sterling had his first season as a regular for Liverpool, they finished seventh and had finished eighth the season before. Rashford entered — via a chance appearance in the Europa League — a United team who were fighting for fourth.

Kane and Alli entered a Spurs team that were muddling around fifth, although found themselves in a title race in Alli’s debut season thanks to the collapse of all other competition.

The point is that they may have been rare occurrences of youngsters becoming young stars at big clubs, but they weren’t at a present-day Manchester City or Chelsea. They were on teams who had lower-quality squads or lower expectations.

Similarly, although Dortmund are in a title race this season, last year they finished fourth, 29 points off Bayern Munich. Sancho had joined a team who could afford to, or had to, play him.

Where does this leave Sancho’s contemporaries, like Hudson-Odoi or Phil Foden?

They’re both at clubs where they’re unlikely to be able to get game-time (although a Chelsea exodus after a poor season, coupled with a transfer ban, may provide Hudson-Odoi with opportunities).

Foden’s former teammate Brahim Díaz is an interesting comparison. Unhappy at City, he moved to Real Madrid, where he’s played the grand total of eight La Liga minutes this season.

If you’re going to force a move, make it to a club where you know you’ll play.

But perhaps we’re all jumping the gun a little. These players are all still young. Was there ever a time when football clubs played youngsters who weren’t at the team’s standard, just to give them time?

You’d have to be Messi-level to break into one of the world’s best clubs as a teenager, and even he didn’t become a regular starter until he was 19, in 2006/07.

For players with the potential of making it big, the message from recent history seems to be this. At around 19, you want to be making regular appearances for a big team, but that can be as a rotational option. By 20 or 21, you need to be starting.

For Hudson-Odoi, who isn’t 19 until November, he still has plenty of time to become a fixture in Chelsea’s rotation. Through good performances in the Europa League, that looks attainable.

Bayern Munich, with Arjen Robben and Franck Ribery set to retire this summer, could be a good landing spot, but carries the risk of the greater expectation at the club. You don’t want to do a Díaz.

Arguably the most important thing to take from this situation, though, is that young players seem to be very aware of their career needs. Sancho is far from the only recent City alumni to force a move away. Hudson-Odoi is stalling on a new contract in London to work out what his best option is.

For these big clubs, the prospect of losing assets — and possibly having to buy them back, fully developed, later on — is a painful one. But, assuming the kids in question force a move to the right landing spot, it’s a good thing both for them, and for England.