Davinson Sánchez is, for now at least, Mauricio Pochettino's revolution in a deal worth £42million.

However, reports in Brazil claim Bordeaux winger Malcom could be joining the club with Spurs parting with close to £50million to bring the Brazilian to the Premier League.

Until it's confirmed, however, it's the 21-year-old centre-back who remains the club's record buy. His arrival in August came somewhat out of the blue. Pochettino wasted no time throwing his new signing into the mix, giving him his full debut for the club after the International break in September.

When a youngster makes the move to the Premier League there is usually an adaption period. Their form tends to be inconsistent and the media, like vultures they are, wait for the player to make their first high profile mistake before ripping into them and letting nobody forget about the price tag.

But Sánchez took to the Premier League like a duck to water. There was seemingly no transitional period. He just made himself right at home in Pochettino's defensive unit. With this in mind, we've decided to take a look at just how well he's adapted to the Premier League and how he stacks up against other defenders in the English top flight.

In his 22 matches for Spurs they've kept 10 clean sheets and conceded 16 goals. The most they've conceded in a single match with Sánchez in the starting XI is two. These stats are even more impressive when you consider the team have been without Toby Alderweireld and Victor Wanyama – two key players.

Many will point to the red card he picked up against Watford as well as his part in the goal West Bromwich Albion scored in the 1-1 draw but they're the only two blemishes on his Spurs career to date.

He's picked up just one other booking, during the 2-0 win over Swansea City, which shows he's got no issue with the pace and physicality of the Premier League.

The 21-year-old showed his class in the Champions League, coping admirably against the likes of Pierre-Emerick Aubameyang and Cristiano Ronaldo.

To put into context just how well he's performing we've compared him to Eric Dier and Alderweireld. 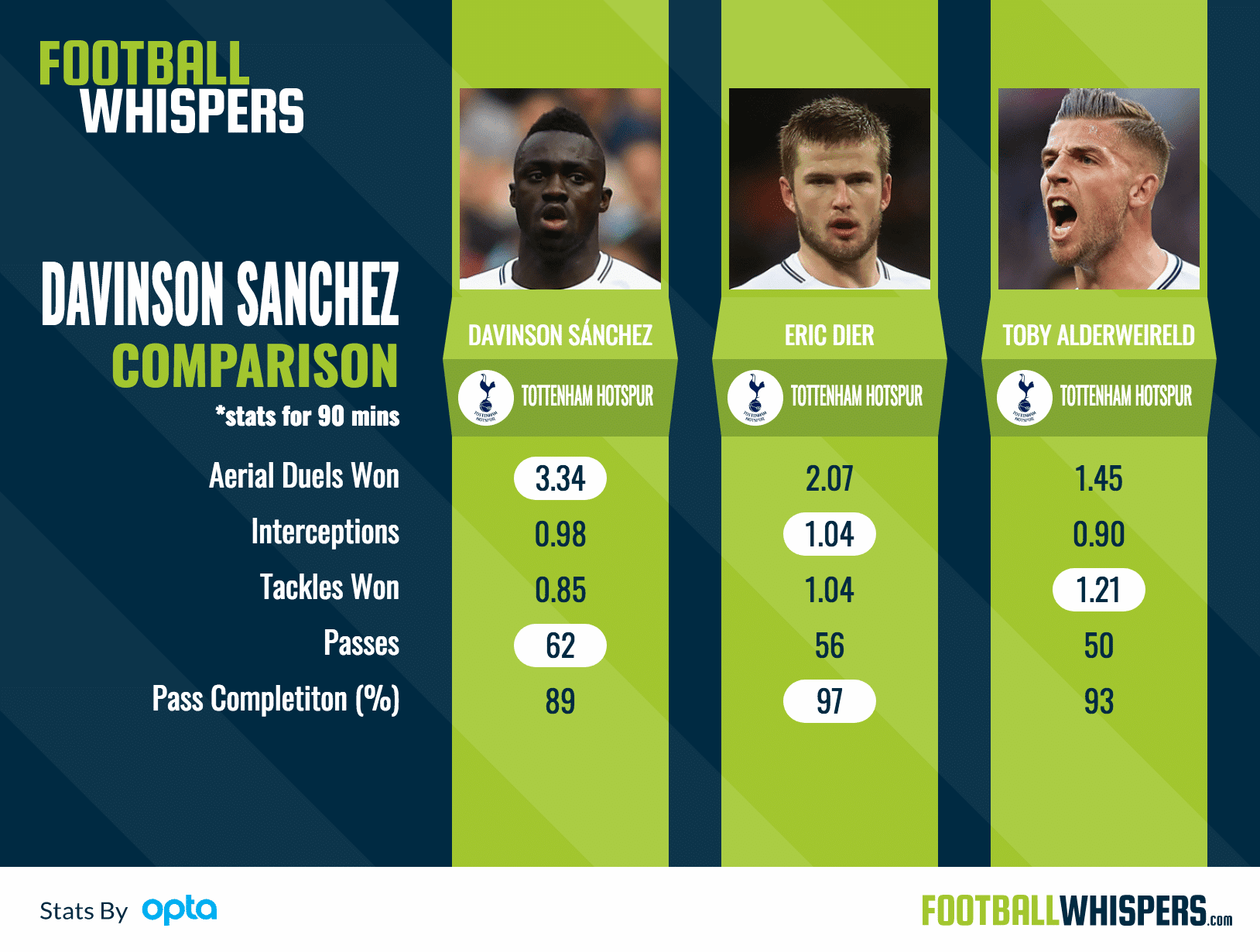 The stats in the graphic above for Dier and Alderweireld are from their 2015/16 season. Dier played as part of the defensive three and the Belgian defender was a mainstay at the heart of the defence – making 30 Premier League appearances. Now, it's difficult to compare the stats because we don't know exactly what Pochettino wants each individual to do.

What you can see, however, is that Sánchez is dominant in the air, winning the most aerial duels of the three. The trio aren't too dissimilar when it comes to interceptions but there is a greater range when it comes to tackles won, with the Colombian winning 0.37 fewer than Alderweireld per 90 minutes.

Dier has the higher pass completion, with 97 per cent of his 56 passes finding their target. What's interesting is that it's Sánchez who is attempting more passes. On average attempting 12 more than Alderweireld – a defender famed for his ability on the ball.

We've also taken a look at expected goals against (xGA). This stat weighs up the high quality chances a team concedes and puts a number on it. It's a way to judge whether you've been fortunate over the entire season or whether you have a mean defence.

The xGA for Spurs during the 2015/16 season was 37.08 which works out at 0.97 per 90 minutes. They improved last season with the xGA90 coming down to 0.88. Pochettino's managed to improve his defensive unit this time around even without being able to call upon Alderweireld and Wanyama. The xGA90 so far for this campaign is 0.81. For further context, in the games Sánchez has played the xGA90 is 0.72.

The improvement isn't down to Sánchez's addition alone but it says a lot that they've been able to improve their xGA90 despite having a number of players missing.

The former Ajax man is only going to improve and the £42million fee may turn out to be a bargain down the line. Sánchez could become one of the best in the world under the watchful eye of the Argentine tactician and there's no reason he couldn't be the first £100million defender.