Huge excitement greeted Alexis Sánchez's arrival at Old Trafford last month, and not without good reason; the former Udinese and Barcelona star, snatched from Arsenal amid interest from Manchester City, proved over three-and-a-half seasons with the Gunners that he is one of the Premier League's most potent attacking forces.

A debut in the FA Cup against Yeovil Town offered no barometer for his top-level impact at Manchester United, and he was unable to inspire a positive result away to Tottenham Hotspur. But the Chilean's all-round performance against Huddersfield Town on his Old Trafford debut was Sánchez's entire game in microcosm: at times frustrating, occasionally wasteful, but a constant and lethal threat to the opposition throughout.

Against the visiting Terriers, Sánchez lost possession 32 times. That was more than any other player on the pitch and more than any United player in a single game this season. Yet he was still, by a landslide, the Red Devils' best player.

Part of the deal with Sánchez is that, in order to benefit from his vast gifts, there has to be an acceptance that he is going to lose the ball fairly regularly. It's a tradeoff rooted in logic: he surrenders possession so often simply because he is constantly trying to poke holes in the opposition; sometimes the impossible feats of creativity he attempts prove to be just that.

But the reason he attempts so many difficult passes, or takes on multiple opponents when a simpler option might be available, is because he can; Sánchez is more capable of pulling off such moves than the vast majority of players. And when it works, defences are carved open, scoring opportunities are conjured.

There are more considered attacking playmakers than Sánchez, who may be equally capable of splitting defences but do so with foot-on-ball approach, carefully weighing up their options. But that's not what United needed; they've got Juan Mata for that. Likewise, a purely instinctive forward who deals with one-on-one situations on the fly is a box ticked by Anthony Martial and Marcus Rashford.

United needed something in between: an unpredictable creator capable of the moments of magic José Mourinho's improvisational approach to attacking play is often predicated on. That's what Sánchez offers. The 29-year-old maintains a clear picture of his team-mates positioning, measuring their movement and looking for link options, while also possessing the ability to improvise when put under pressure. 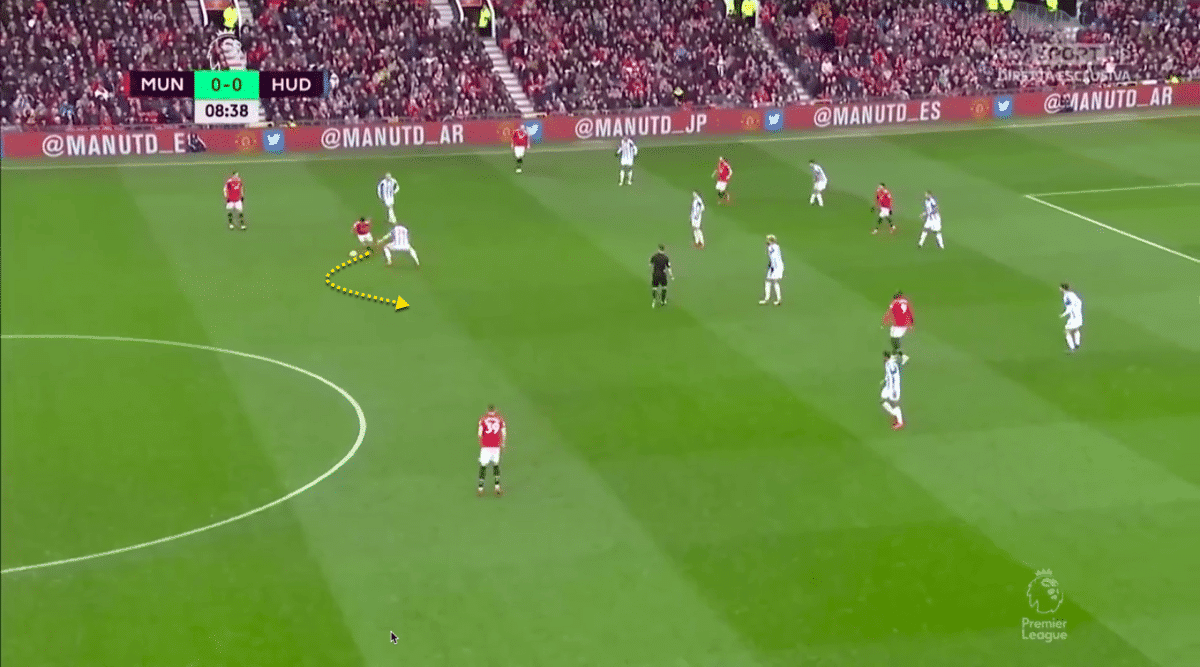 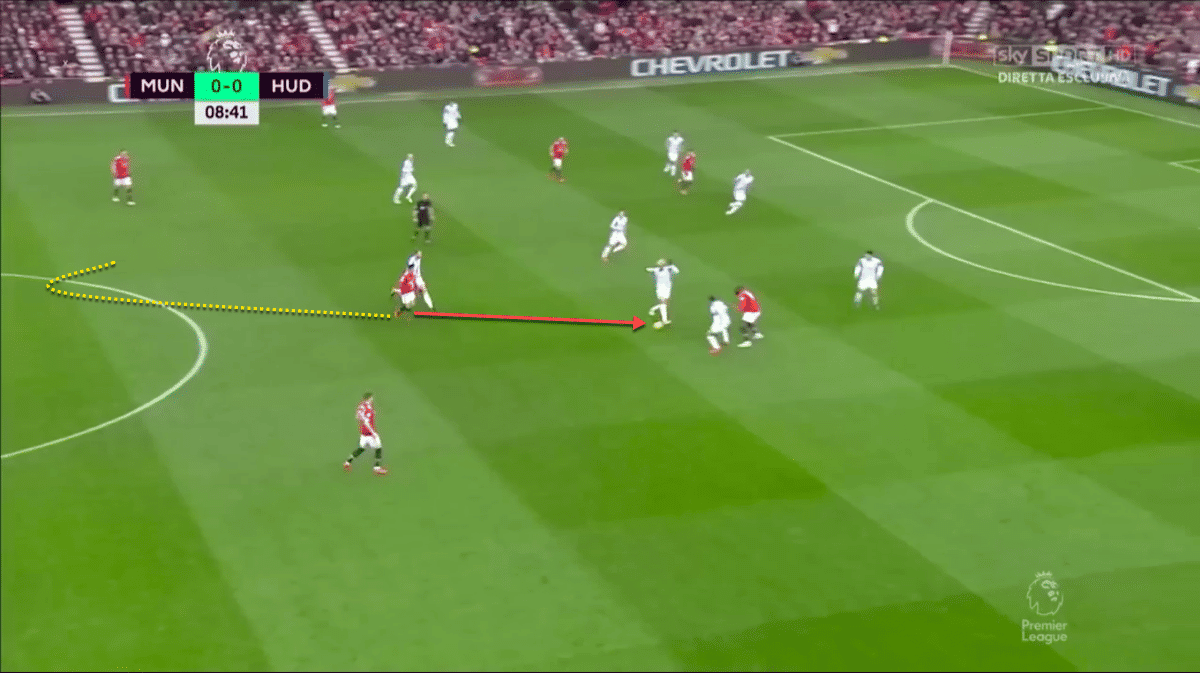 Not everything he tries will come off – that's the nature of the high-risk moves Sánchez attempts to execute. Above, early in the 2-0 win over Huddersfield, we see a perfect example: after expertly rolling away from his marker, the former Arsenal man tries to feed Lukaku into feet, but the gap he wants to slide the ball through doesn't exist. 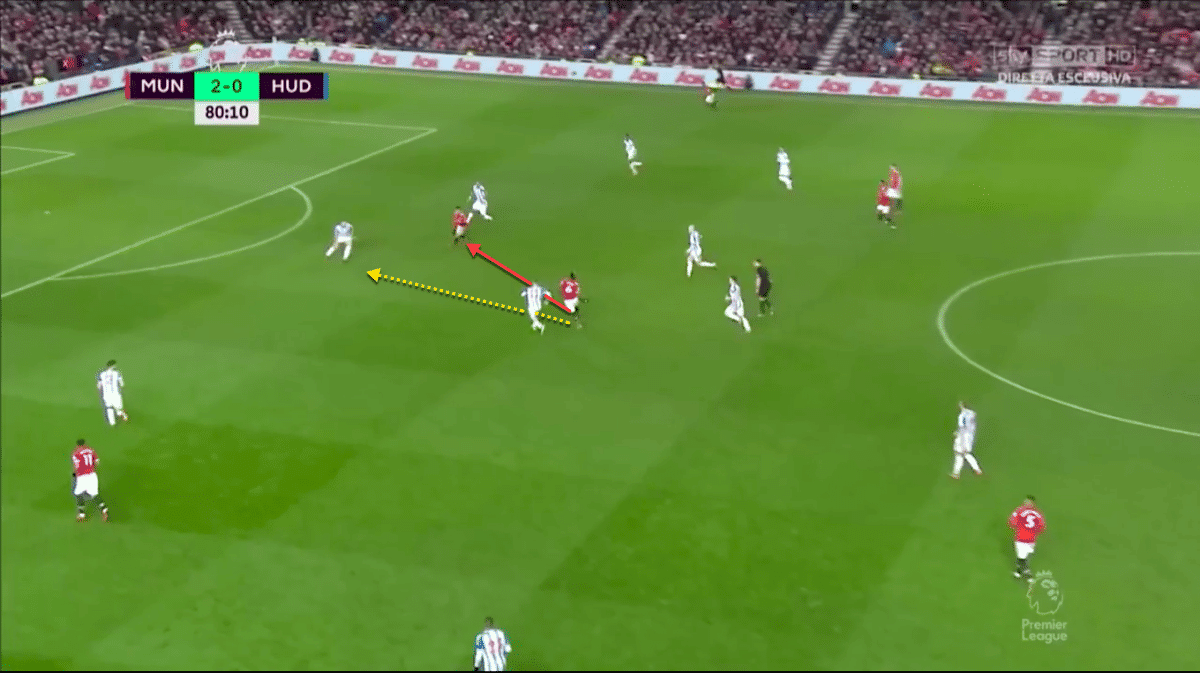 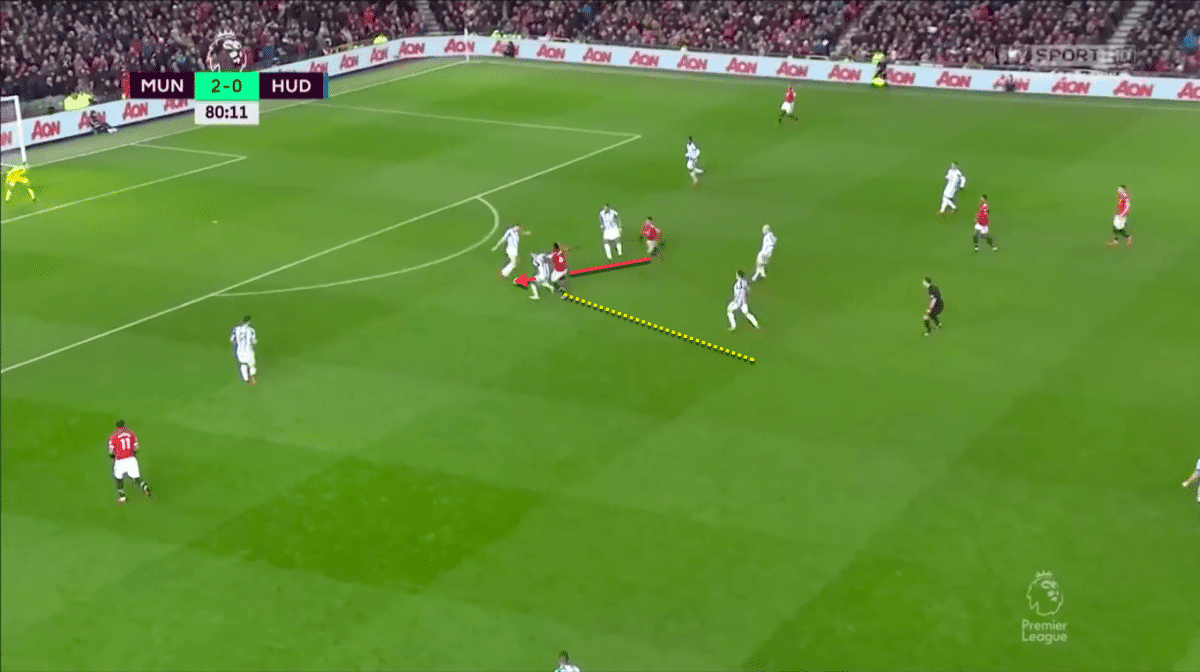 This time Paul Pogba looks to initiate a give-and-go with Sánchez, breaking through midfield before playing the ball into the United No.7 and continuing his forward progress in anticipation of a return pass. Sánchez's ball, though, is once again played into an area well marshalled by the opposition.

But the positives far outweighed the negatives of Sánchez's performance on his Old Trafford debut. The 119-cap Chilean superstar was a buzzing creative presence throughout, roaming freely from his starting position on the left side of attack, scoring the rebound from a saved penalty which he had won and taken, firing three shots on target, creating three chances and completing more dribbles (nine) than any United player has managed in a single Premier League game this season – Rashford's six successful take-ons against Brighton & Hove Albion in November was the previous high mark. 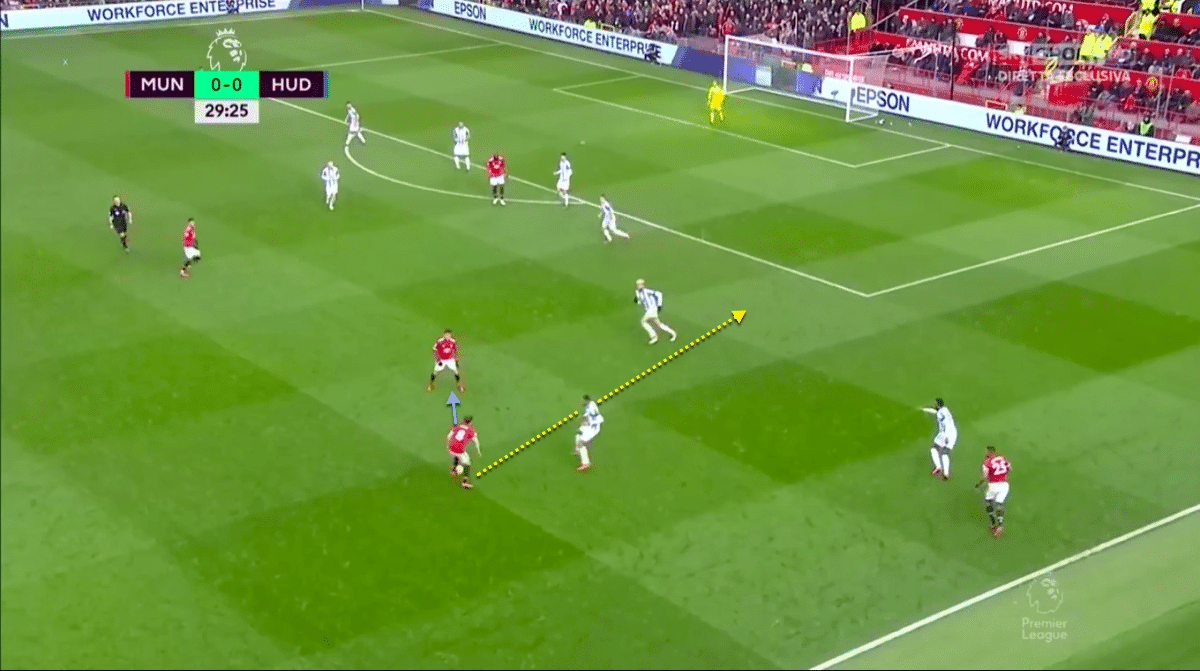 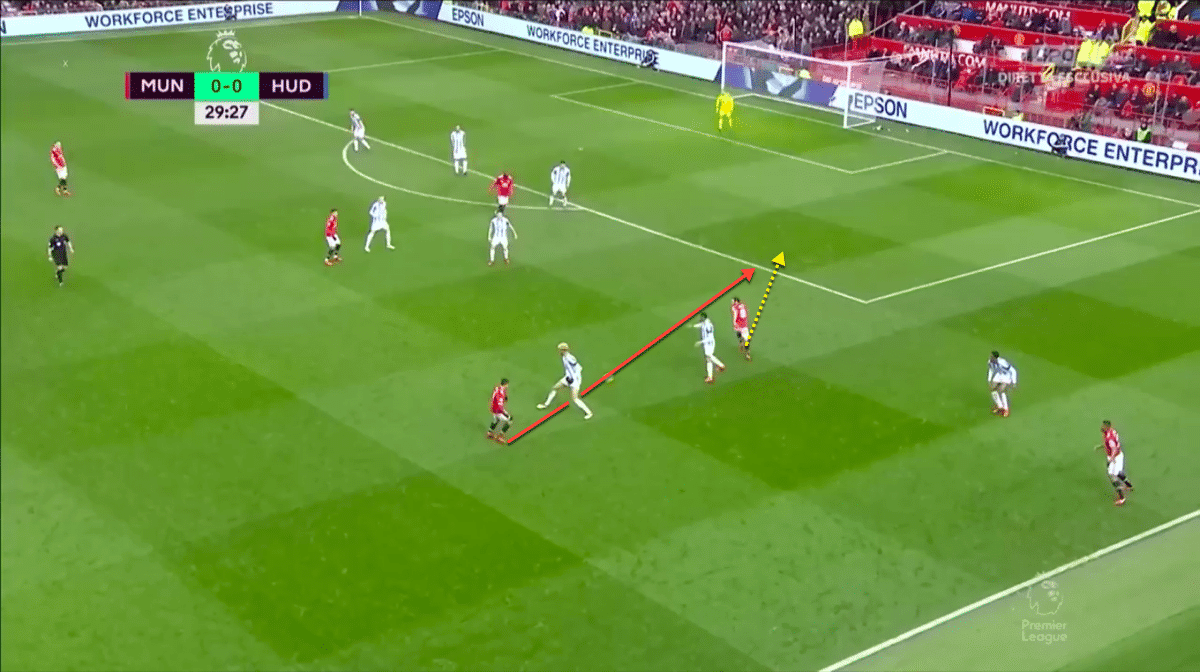 The above sequence shows how effective Sánchez's creative instincts can be when all goes to plan. Recieving a short pass from Juan Mata, the Chilean turns and threads a perfect through-ball back into the Spaniard's path, nutmegging Phillip Billing in the process and sending the United No.8 clear into the penalty area. 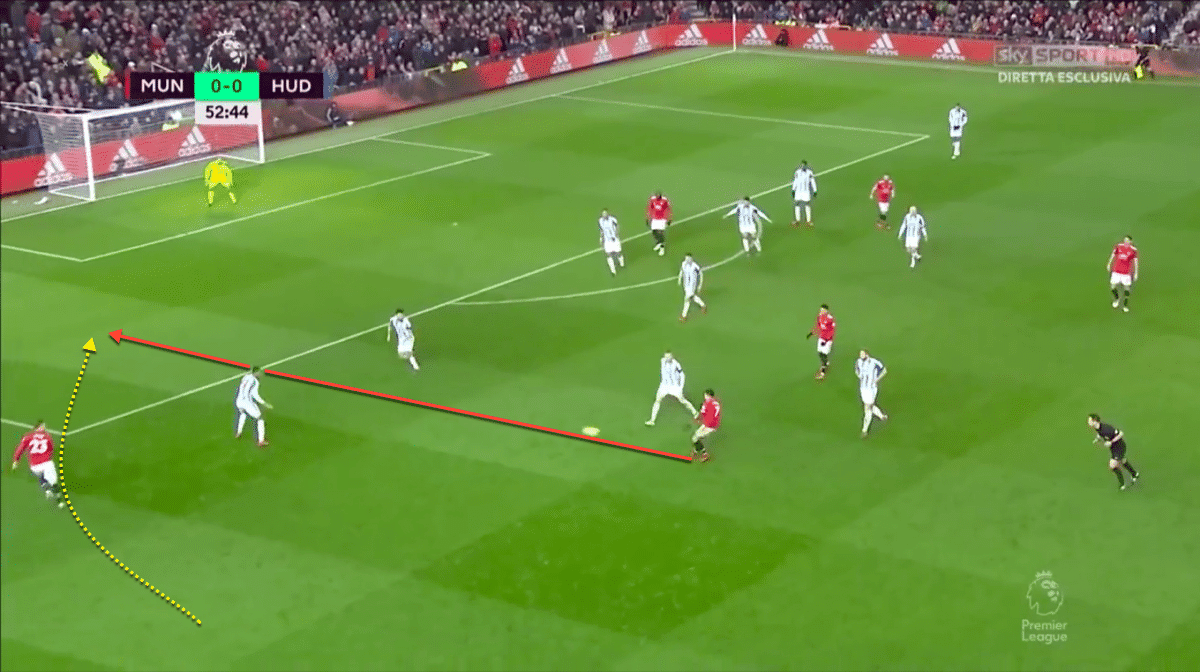 This time we see Sánchez again perfectly calibrating a through-ball, picking out the bursting run of left-back Luke Shaw. Had the England international defender's subsequent cross been more accurate, Romelu Lukaku could well have opened the scoring earlier than he eventually did. 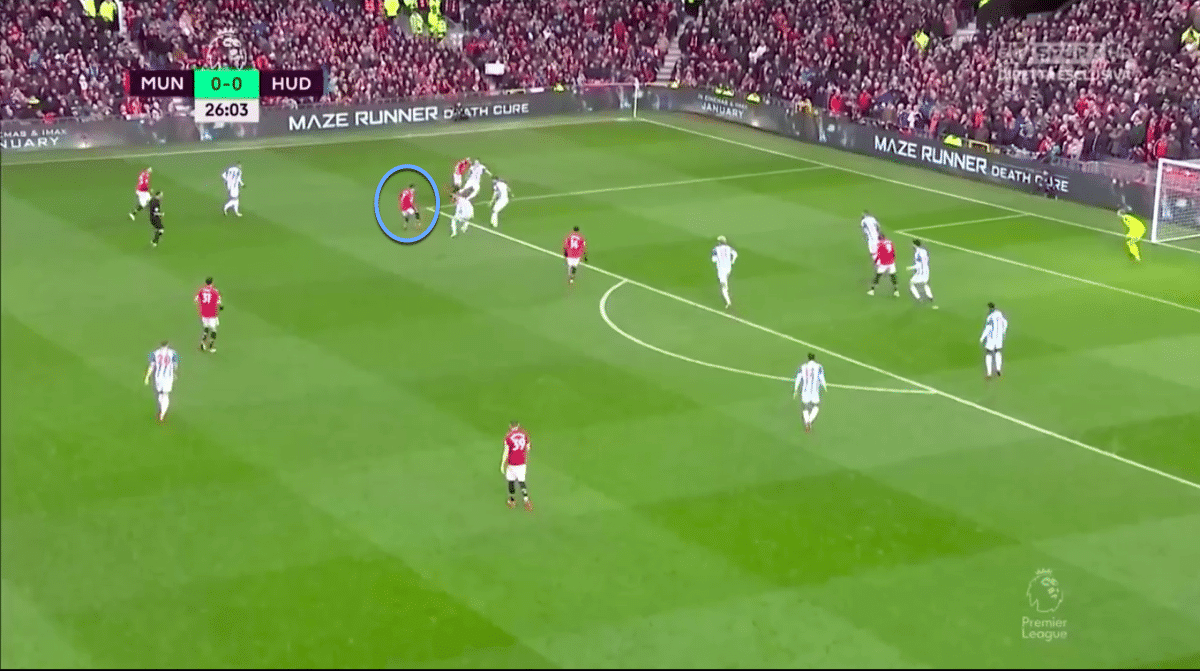 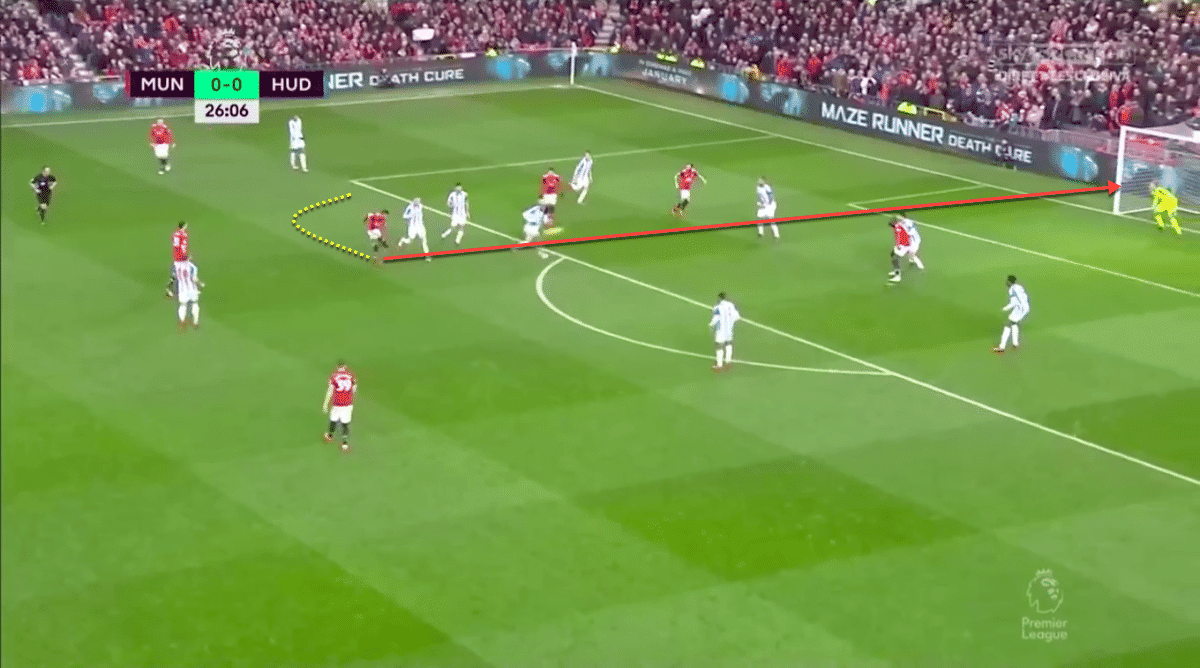 Here, we see how Sánchez dynamic and unpredictable dribbling ability can open up a chance from out of nowhere. Receiving the ball wide on the left, just outside the penalty area, he appears to be cornered by two Huddersfield defenders. But few players in the league turn as quickly as Sánchez, whose low centre of gravity enables him to suddenly move into space and send a rasping shot goalwards.

All of this isn't to suggest Sánchez's propensity for losing the ball so often should be glossed over; the Chilean perhaps lacks the ability to make quick and accurate risk-reward calculations before trying to take on one opponent too many, or thread the ball through a gap that isn't there.

But it becomes easier to reconcile with his occasional over-exuberance when studying all the ways in which he threatens the opposition, as creator or scorer. United's attack only works when driven by a constant will to improvise and create; in Sánchez, they have found their new chief instigator.