For all the criticism of Daniel Levy’s indolence in the transfer market, which has led to tumbleweeds blowing through the white and navy blue half of North London, the lack of activity is also a confirmation from within the club of the strength of Mauricio Pochettino’s squad.

While reinforcements could have been made, and it’s telling that the one player they really pushed for was Jack Grealish who would have served as an alternative to Christian Eriksen or Dele Alli rather than a genuine first-teamer, there is faith the group of players already there can fulfil what’s required in 2018/19.

Unfortunately, barring a freak turn of events, that won’t involve a Premier League title challenge with Manchester City seemingly off into the sunset and Liverpool the only side capable of chasing them, as José Mourinho’s melancholy keeps Manchester United in the shadows as they compete for third and fourth with Chelsea, Tottenham and Arsenal.

But even if third-place and, maybe, a cup seems a slightly underwhelming ambition for a squad of this calibre, there is much to be excited about with what Pochettino has assembled and if Levy continues to quote suitors £200million for reported Real Madrid transfer target Eriksen, chances are it will stay together for a while yet.

Davinson Sánchez may not be at the level of Eriksen, Harry Kane, Alli, Hugo Lloris or Jan Vertonghen yet, but the defender's progress in just 12 months has been eye-catching.

If Levy was reluctant this summer, many were quick to lambast his apparent recklessness in 2017 for sanctioning the £42million capture of a largely unknown 21-year-old centre-back who had just one season of European football behind him with Ajax.

The Colombia international’s impressive debut campaign helped Tottenham edge Liverpool into third place and convinced Levy that, with a spread of young, improving talent throughout the team, there is little incentive to spend.

Such has been Sánchez’s startling development in the heart of defence, either as part of a back four or alongside Vertonghen and Manchester United transfer target Toby Alderweireld in a back three, there is enough evidence to suggest the youngster can become one of the finest defenders in England.

With Sánchez settled in North London, Spurs can be grateful that their central defensive options seem more reliable than United and Chelsea, both of whom are yet to fully establish a concrete first-choice pairing.

With Vertonghen’s leadership, passing range and all-round authority coupled with the athleticism, pace and dynamism of Sánchez, Spurs have the ideal blend and two individuals playing at a consistently high level under the trust of their manager.

Sánchez’s enhanced role has seen him taking on more responsibility as a passer and now a growing threat from set-pieces as his header to Ventonghen led to Spurs opening the scoring at St James’ Park.

It may prove to be a temporary blip, but he recorded three scoring attempts in the game and three touches in the opposition box, compared with nine and 12 throughout the entire 2017/18 campaign.

At 22, Sánchez doesn’t have to worry about his pace disappearing, his strength should incrementally improve as his body ages and he has the height and physicality to remain a force in the air and in making tackles – which has become something of a trademark.

But there are still creases to his game that need to be ironed out and although Pochettino, Levy and Tottenham fans, in general, are right to feel content about the future with him at the heart of their defence, sooner or later the lapses in concentration and mistakes will have to end.

Just three minutes after flicking Eriksen’s corner into the path of Vertonghen, the Colombian was culpable for Joselu’s equaliser for Newcastle. Matt Ritchie’s cross for the hosts was excellent but the Spanish striker found himself in space between Sánchez and right-back Serge Aurier for a free header.

Blame could be laid with Vertonghen, who was dragged slightly to the near post area, but it’s Sánchez on Joselu’s shoulder throughout the build-up only to get drawn slightly towards the ball and then make a poor attempt at a leap once Ritchie’s cross is swung in.

One of the duels he lost was to Ayoze Pérez in the 51st minute but his failure to get a proper connection on the ball, coupled with Aurier’s dreadful forward pass, led to Joselu playing Kenedy through, only for the Brazilian’s touch to let him down.

In the 59th minute, Sánchez also failed to clear his lines in a goalmouth scramble and then was lackadaisical in reacting to the loose ball only for Pérez to be denied by Lloris at the near post. 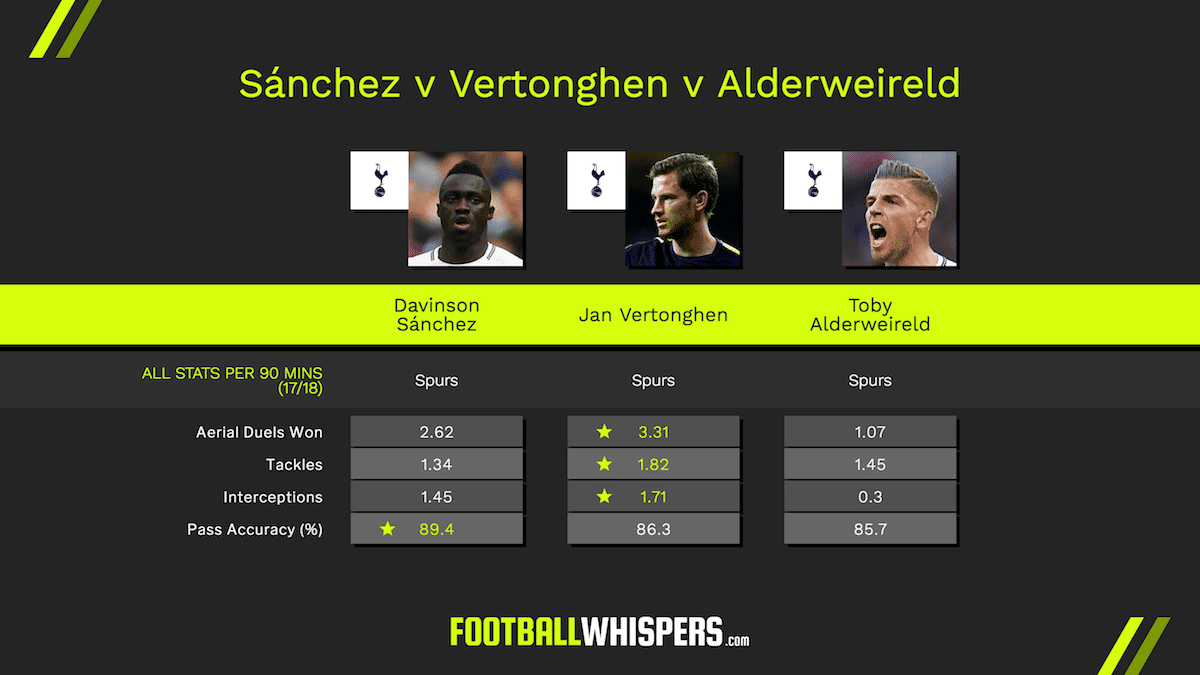 There is an element if nit-picking but these are still errors of judgement and mistakes in key areas that led to goals or good goalscoring opportunities, which aren’t becoming of genuine top-class defensive players.

We saw another glaring example at the World Cup where he was caught in possession by Japan’s Yuya Osako whose run forward into open space then culminated in Carlos Sánchez’s sending off for handball.

But he’s 22, what should we expect? Mistakes will be made as further responsibility is bestowed on him in pressure situations.

However, it’s a reminder that for all his qualities, Sánchez, just like the Tottenham side around him, is far from the finished article. That, in itself, is an aspect of the club that is exciting and frustrating in equal measure.