Today's Predictions for Sampdoria vs Cagliari

Sampdoria currently sit 9pts clear of the relegation places in Serie A and will be looking to distance themselves even further from the bottom three with a win at home against struggling Cagliari on Thursday. The visitors arrive sitting second from bottom and with just 10pts to their name but did manage to beat Sampdoria 3-1 when the pair met back in October.

We're expecting goals in this game at both ends of the pitch, as has been the case in four of the last six meetings between Sampdoria and Cagliari in league and cup. Both teams have also scored in each of the home side's last six outings in all competitions, while Cagliari haven't kept a single clean sheet in any of their last five fixtures.

Manolo Gabbiadini started the season slowly for Sampdoria but has now scored 5-goals in his last five league games and looks to be in red hot form. The 30-year-old striker will move level on six league goals with teammate, and current top scorer, Candreva if he finds the back of the net against Cagliari this Thursday.

Sampdoria were away at Roma in their final game of 2021 and managed to come away with an unexpected point. The two sides went in goalless at the break but Roma took the lead through Shomurodov in the 72nd-minute, a goal which many expected to win the game. However, Sampdoria showed belief and desire to get back onto level terms through their in-form striker Gabbiadini with 10-minutes left on the clock. Sampdoria are now unbeaten in their last three league games and have begun moving up the Serie A table as a result.

Nobody gave Cagliari a chance away at Juventus in their last Serie A game and those predictions were proved correct. Moise Kean opened the scoring in the 40th-minute and Juve went in 1-0 up at the break. The hosts confirmed their victory 7-minutes from time via Bernardeschi's strike which wrapped up a 2-0 win for Juventus. Cagliari gave a decent account of themselves in that game but have to sure up their leaky defence if they want to stand any chance of beating the drop this season.

Sampdoria: Askildsen is suspended, while Augello, Falcone, Damsgaard and Vieira could miss out.

Cagliari: Henrique is suspended for the trip to Sampdoria and Nández, Strootman, Walukiewicz, Rog and Ladinetti are all concerns. 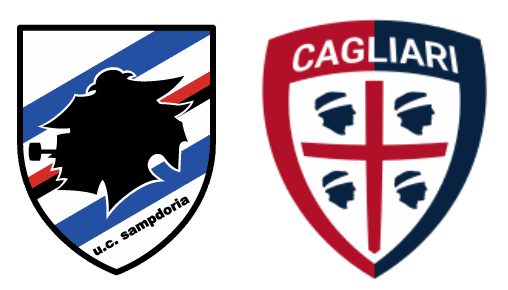