AC Milan's title challenge faded away in the latter stages of the previous campaign and after seeing their rivals lift the league trophy, Ibrahimovic and co will be desperate to make things right in 2022. Sampdoria have the home advantage on Monday night but lost this very fixture last season 2-1 and went on to finish in 9th place.

AC Milan have won three of their last six encounters with Sampdoria and all of those victories have come away from home. AC Milan finished 2nd in the table last season and really proved the doubters wrong with 24 wins in 38 matches, while Sampdoria lacked goals at times and simply lost too many games which is why they failed to qualify for Europe.

We're not expecting many goals in this game and believe AC Milan have a very good chance of keeping a clean sheet. Under 2.5 goals have been scored in four of the last six encounters between the two clubs and three of Sampdoria's and three of AC Milan's last five fixtures have also witnessed fewer than three goals scored.

In terms of a final scoreline, we're predicting a 1-0 win for AC Milan on Monday night. The first game of a new season can often be tight and tense as neither teams want to start with a defeat. However, AC Milan have extra quality up-front in the form of Ibrahimovic and Giroud that Sampdoria simply can't match and we expect this to prove the difference between the pair.

Sampdoria are expected to be without Fabio Depaoli for the game against AC Milan as the player is struggling with a shoulder injury. Sampdoria were tested more than they probably expected at home to Alexandria in the Coppa Italia last week, twice going behind. Gaols from Quagliarella, Gabbiadini and Thorsby helped the hosts overcome their lower league guests 3-2 in the end. Monday night will prove to be a different challenge all together though as AC Milan have won their last three trips to the Luigi Ferraris Municipal Stadium.

The visitors have a clean bill of health heading into the first game of the season and expectations are high after a very good performance from AC Milan in the previous campaign. AC Milan have some work to do in order to topple Inter though as they finished 12pts behind the champions last season but with their city rivals losing their manager and their top scorer, Inter may have done some of the work for them. Giroud has been brought in to play alongside Ibrahimovic this season and we have high expectations of both players. 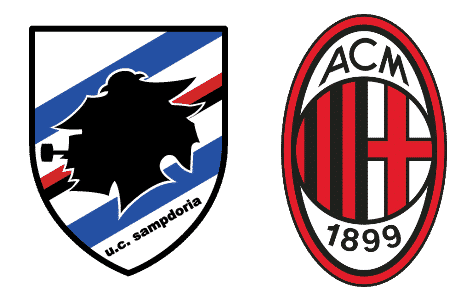