Precisely ten years ago, Samir Nasri was, for lack of a more sophisticated phrase, loving life.

The mercurial Frenchman basked in the glory of scoring twice for Arsenal to defeat Premier League champions Manchester United.

It was November 8, 2008, and he had single-handedly crushed Sir Alex Ferguson's Red Devils to reignite the Gunners' title bid.

The young Frenchman – signed that summer from Marseille – flourished in a hammer-and-tongs battle of open, attacking football, the kind of spectacle a nimble-footed playmaker such as he relishes.

That evening, Nasri outshone Cristiano Ronaldo and was quickly hailed as one of the Premier League's most promising young players. Just 21, the midfielder's technique, flair and flashes of arrogance gave the impression that he would soon become a bonafide star.

Yet, a decade on, as he prepares for a shock return to Premier League football with West Ham United following an 18-month doping ban, we reflect on his curious journey to this point; the dizzying highs, shocking lows and a fair bit in between.

His two goals against United were by no means a flash in the pan. While a broken leg before the start of the 2009/10 campaign hindered his progress, he regularly offered reminders of his considerable gifts.

In Arsenal's 5-0 Champions League demolition of Porto in March 2010, Nasri evoked memories of George Best after the manner in which he danced and weaved his way through three increasingly disorientated defenders before lashing home a venomous shot. It was a performance which prompted The Guardian‘s David Lacey to mention him in the same breath as the great Stanley Matthews.

Dubious though the connection may have been, it was a measure of the youngster's burgeoning reputation.

Nicklas Bendtner scored a hat-trick that night and, while the Danish striker outlasted Nasri at the Emirates, it was the Frenchman who continued on an upward curve.

Bendtner's performances during the 2010/11 season earned him a loan to Sunderland, while Nasri clinched a spot in the PFA Team of the Year and a £25million move to Manchester City, jumping from the Emirates to the Etihad.

Having outperformed Cesc Fàbregas and Robin van Persie in his final year in north London, however, he struggled to step out of David Silva's shadow at City.

After a summer-long transfer saga, he teased City fans of what to expect with glimpses of his genius during a dream debut. Roberto Mancini's men hammered Tottenham Hotspur 5-1 at White Hart Lane and, while four-goal Edin Džeko stole the headlines, their new signing's contributions – three assists – did not go unnoticed. 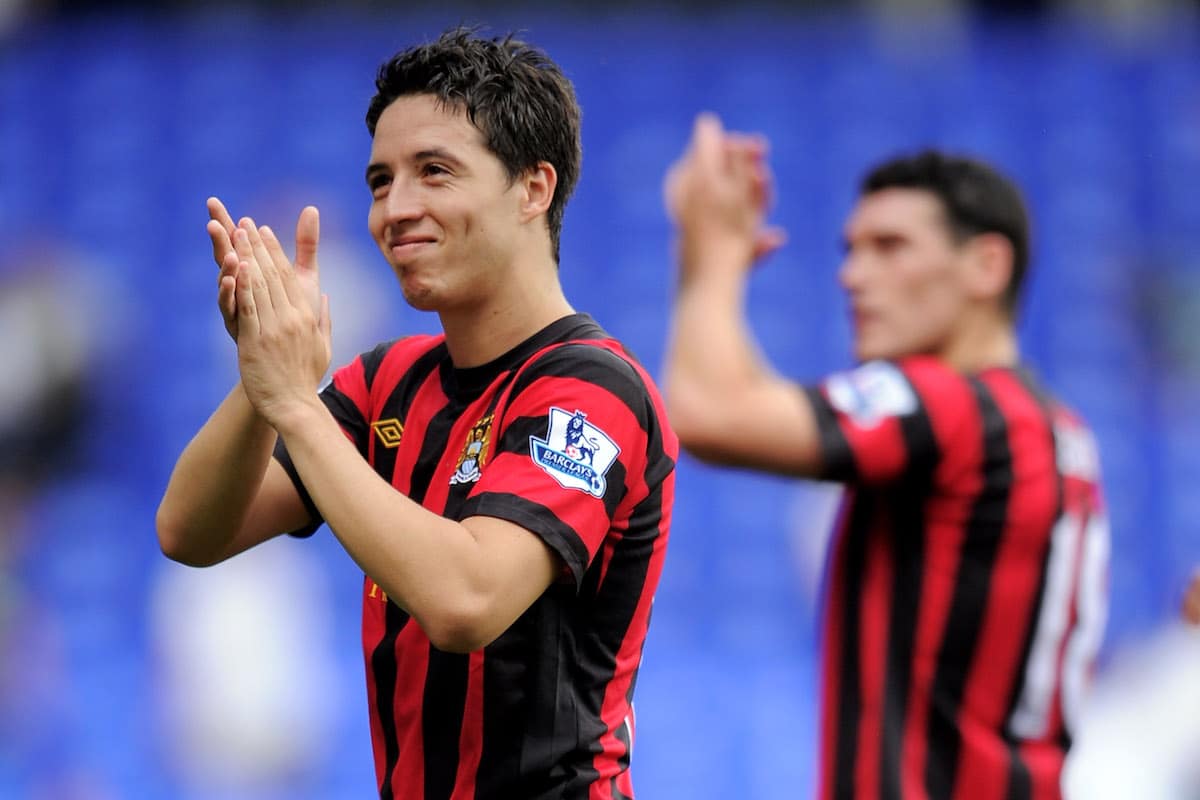 There were several standout players for Mancini's men that season. Vincent Kompany was inspirational, Yaya Touré dominated most games, Silva sparkled, and Sergio Agüero etched his name into City folklore with his title-clinching strike. Nasri's performances, while encouraging, didn't appear on the showreels nearly as many times as the Argentinian striker.

Nasri had gotten his wish. He became a Premier League champion in his first year in Manchester but a significant slump throughout the 2012/13 campaign led Mancini to admit that, at times, he wanted to give the playmaker a ‘punch' for regularly failing to live up to expectations.

In keeping with his career-long search for consistency, Nasri followed an underwhelming season with an exceptional one, starring during Manuel Pellegrini's first season at the helm as City reclaimed the title.

Nasri was reborn under the Chilean. Thoroughly disenchanted under Mancini, he thrived as a crucial cog in Pellegrini's machine, making a career-high 30 Premier League starts as City scored 102 goals en route to glory, contributing seven goals and seven assists.

Again, though, Nasri struggled to maintain such a level, flickering sporadically during Pellegrini's second season, his confidence perhaps dented after having been excluded from Didier Deschamps' World Cup squad (a decision which prompted the player to call time on his international career). 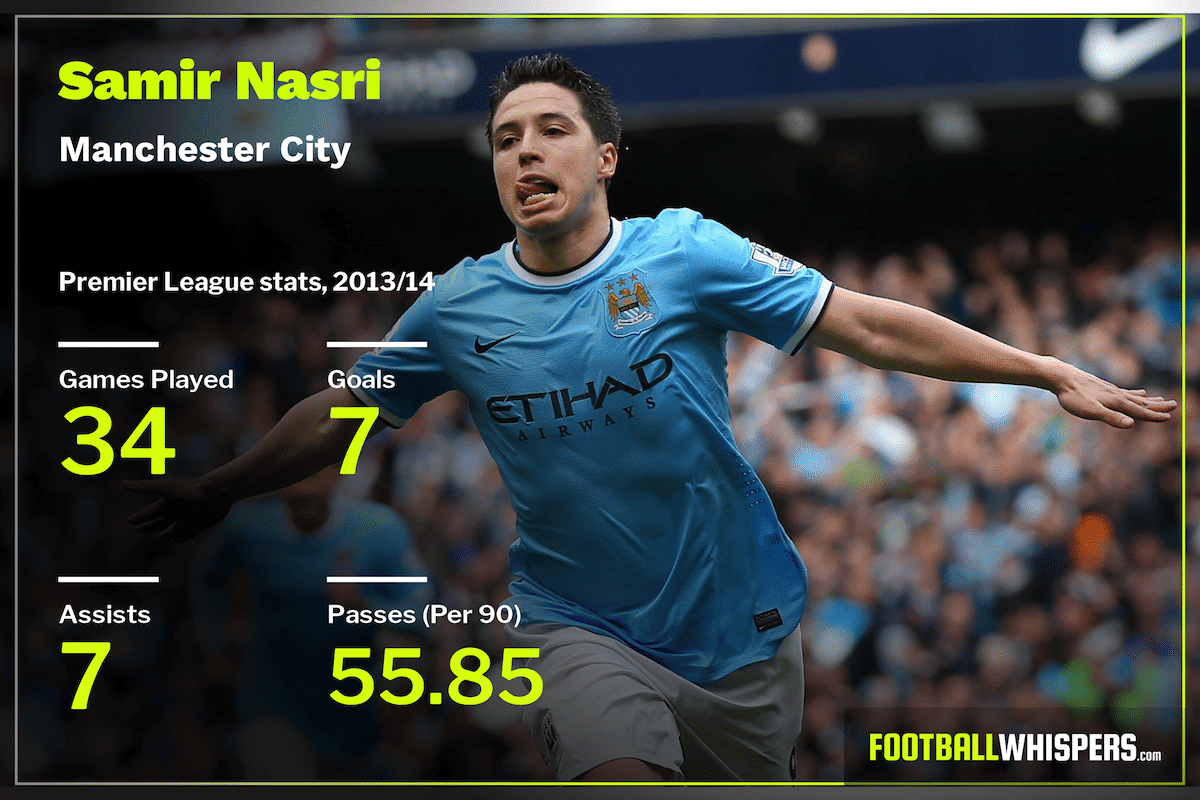 Then, a serious tendon injury saw him miss five months of the 2015/16 campaign. But by the time he returned in April, it had already been confirmed that Pep Guardiola would succeed Pellegrini.

Although he had harboured ambitions of establishing himself as a key figure in the Catalan's evolution, Nasri became the first high-profile victim of Guardiola's desire to shed the dead wood from the Etihad. Guardiola, renowned for his exacting, perfectionist approach, refused to field Nasri during pre-season after ordering the Frenchman to lose weight.

A few weeks later, however, Nasri's City career was as good as over. Loaned to Sevilla, he recaptured his best form at the Ramón Sánchez Pizjuán under a similarly demanding coach in Jorge Sampaoli.

Injuries regularly interrupted Nasri's year in Seville while a red card as the club exited the Champions League to Leicester City was ignominious, his headbutt on Jamie Vardy hindering his side's chances of scoring an away goal.

Despite that indiscretion, many still believed Nasri had shown enough to warrant a second chance under Guardiola.

But he didn't fit the former Barcelona boss' tactical plan. While Nasri dazzled as an inverted winger under Pellegrini, Guardiola demanded that his wide players hug the touchline to stretch the game, preferring the electrifying acceleration of Raheem Sterling and Leroy Sané.

With the curtain drawn on his time at City, Nasri joined Turkish side Antalyaspor in August 2017. Just five months later, however, he and the club mutually agreed to terminate his contract with the player the subject of a UEFA investigation into his use of an intravenous drip at a Los Angeles clinic in December 2016.

With his 18-month ban (backdated to July 1, 2017, and extended from an initial six months) set to end in December, the former France international is free to play once again.

The fact that he looks set to sign a short-term, £80,000-a-week deal with West Ham, managed by his old mentor Pellegrini, represents a precious opportunity for Nasri to revive his professional career.

His wage demands will certainly raise more than a few eyebrows and, while the Hammers have had mixed fortunes with signing attack-minded players in recent times, the two-time Premier League winner has the ability to lift the club into the top half of the table and fill the void left by Andriy Yarmolenko, who will miss the rest of the season after rupturing his Achilles tendon.

But Nasri's imminent arrival at the London Stadium will doubtless attract mixed feelings among the West Ham faithful, particularly with Patrice Evra fresh in their minds. The former Manchester United defender was offered a route back into football by the Hammers last season after he was sacked by Marseille for kicking a fan.

A declining force, Evra made five appearances and when his short-term contract expired. Rumours of his £75,000-a-week wages angered fans. Nasri is six years Evra's junior but West Ham's latest experiment is equally fraught with risk. As his career has proven, he has the capacity to thrill and frustrate in equal measure, but has never taken kindly to criticism.

If anything, it's unlikely to be dull.