Just as Matt Ritchie was ready to abandon his superstition he struck lucky.

The Newcastle United winger wears custom-made shin pads with sausage rolls printed on them. Whether or not the Scotland international is a particular fan of the pastry item is unclear, but he'd say it's because “sausage rolls equal goals”.

Matt Ritchie’s shinguards. Sausage rolls = goals. He told me yesterday he was thinking of getting new ones because he kept hitting the woodwork – then he scored today! #NUFC pic.twitter.com/q9Pu07EIX3

And so it proved. On February 11 Ritchie finally opened his account for the season to hand the Magpies a famous 1-0 win over Manchester United.

Like London buses, Ritchie's first strike of the campaign was followed by a second in the 3-0 success over Southampton prior to the international break, a victory which gave Newcastle some breathing space on the relegation zone.

And it is no coincidence the former Bournemouth wide-man has finally hit the goal trail. After a fine start to the season in which he bagged four assists in five Premier League fixtures, Ritchie endured a less impressive period of form which mirrored the team's.

But he is back to his best, terrifying full-backs and playing a central role to Newcastle's upturn of recent weeks.

United boss Rafael Benítez clearly felt he needed to bolster his wide options in January, signing Kenedy on loan from Chelsea for the rest of the campaign.  Galatasaray's Garry Rodrigues was also a Newcastle transfer target.

And while a deal for the Dutch-born winger didn't happen, Kenedy has been a breath of fresh air on Tyneside, scoring his first two Magpies goals in that 3-0 rout of Southampton.

An unexpected bonus of the Brazilian's arrival has been his impact on Ritchie on the right-hand side. The 28-year-old has finally been able to share the creative burden placed upon his shoulders and his own form has benefitted.

In the six games since Kenedy arrived at St James' Park, the impact the Brazilian has had on Ritchie's role is clear. The Magpies No.11 had been supplying 1.9 key passes per 90 in the Premier League. In the five games he has played alongside the Chelsea loanee that figure has dropped to 1.2.

Similarly, Ritchie had been putting in 1.6 crosses per 90 prior to Kenedy's arrival. That has dipped to 0.5 in the last five games with the Samba star picking up the slack by suppling 1.2 of his own. Christian Atsu, who had been played on the left previously, has managed just 0.3 per 90 this season despite featuring regularly.

Furthermore, as the graph below shows, Ritchie is yet to complete a dribble since Kenedy (1.8 per 90) arrived, further evidence of his changing role in this Newcastle side. 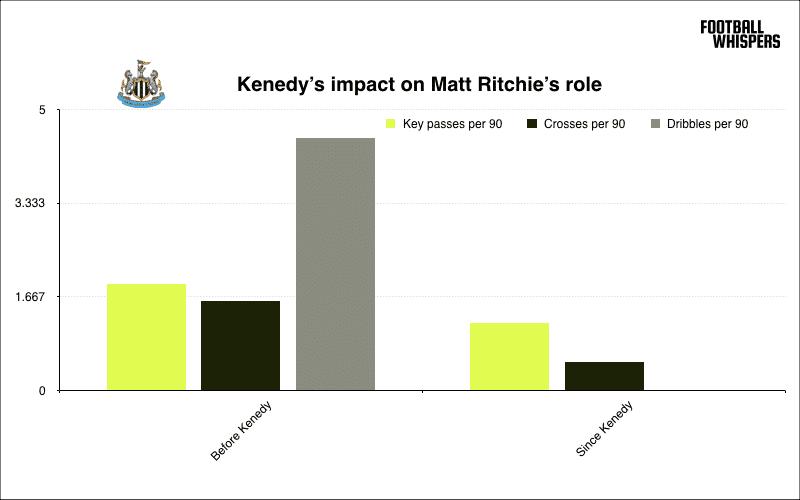 In the 1-1 home draw with Swansea City in January, the Magpies' final Premier League fixture before Kenedy joined, Ritchie did not touch the ball inside the penalty area.

Yet against Burnley, another 1-1 draw but with Kenedy debuting, he has two touches inside the Clarets' penalty area in a 19-minute cameo.

The benefit of all that isn't necessarily a tangible. But it has freed Ritchie up to get into more dangerous positions instead of being the player supplying the deliveries for those in the middle. His goal against the Saints was the perfect example of that.

With Kenedy (circled in white) offering Jonjo Shelvey a wide option, Ritchie abandoned his post on the right, drifted inside, waited for the pass and curled beyond Saints keeper Alex McCarthy.

Last season Ritchie was crucial in Newcastle's promotion, scoring 12 times from the flanks and adding a further seven assists. This season he has five assists and just two goals.

The step up from the Championship will have played some part in that. So too will his ability to get into the positions to score.

In the second tier Ritchie was taking 2.8 shots per 90, a figure which has dropped to 1.9 this season. His last season in the Premier League with the Cherries saw him take aim with 2.3 efforts per 90, 0.7 of which were from inside the penalty area. This season that figure is just 0.5.

On the face of it Newcastle might not be big enough for the both of them. However, the arrival of Kenedy has not only injected some Samba flair into proceedings, but given Scotsman Ritchie the freedom he need too.