The comparison is easy to make. An African central midfielder playing with the Red Bull pool of clubs, Diadie Samassékou was always going to be likened to Liverpool-bound Naby Keïta.

The 22-year-old has been one of the driving forces behind RB Salzburg’s incredible season. Closing in on 3,800 minutes from 44 appearances in a season where Salzburg have once again captured the league title, the Mali international is the latest all-action midfielder who could be bound for the Premier League.

The highest valued player in the Austrian Bundesliga at €15million, Samassékou is the engine behind Salzburg’s improbable Europa League run and his impressive displays have piqued the interest of French giants Paris Saint-German and semi-final opponents Marseille, as well as making him a Tottenham transfer target. The North Londoners, reportedly, see him as a replacement for Belgian Mousa Dembélé.

There are, of course, a bevy of Bundesliga clubs willing to pay the €15-20 million fee though, for obvious reasons, RB Leipzig are the prohibitive favourites. With his contract expiring next summer, Samassékou would likely replace the departing Keïta.

And since Samassékou is often compared with the Liverpool signing, it’s worth taking a closer look at him and his captivating performances.

Samassékou is a product of the Mali branch of the famous JMG academy, named after Jean Marc Guillou who gave Arsène Wenger his first coaching break in 1983.

Responsible for the Ivorian wave that swept world football with the Touré brothers – plus Emmanuel Eboué, Gervinho and Didier Zokora – the 72-year-old Frenchman is known for his unorthodox methods, which include playing barefoot and without goalkeepers.

Alongside Monaco player Adama Traoré and fellow RB Salzburg midfielder Amadou Haidara, Samassékou broke out at the 2015 Under-20 World Cup side, scoring the decisive penalty for Mali in the quarter-finals to beat a Germany team which included Julian Brandt and Julian Weigl.

It took the Sergej Milinkovic-Savić's Serbia until extra time to overcome the Eagles on their way to winning the tournament. Samassékou’s goal secured the bronze medal in a 3-1 triumph over Senegal and also a move to RB’s farm team FC Liefering.

While at second division Liefering he usually played in the double pivot – sometimes alongside current Salzburg team-mate Xaver Schlager and ahead of Dayton Upamecano.

It took him just a year to make it into RB’s first team. By the autumn of 2016 Samassékou was playing regularly alongside Konrad Laimer as part of a double pivot. Former Watford manager Óscar García also gave him three run-outs in the Europa League following a dramatic loss in the Champions League qualifiers to Dinamo Zagreb, a game in which Samassékou was sent off in the first leg.

This season the Mali dynamo became the lynchpin of the Salzburg starting XI after Marco Rose and René Maric were promoted from the UEFA Youth League-winning side of last summer.

Samassékou is primarily used as the single defensive midfielder regardless of formation – RB usually play a 4-4-2 diamond with him at the base. Against stronger teams like Borussia Dortmund or Marseille that becomes a double pivot 4-4-2 with Valon Berisha partnering Samassékou, or a 4-3-1-2 with Haidara acting as the third central midfielder.

Samassékou is a prototypical modern defensive midfielder: an intelligent, athletic and rangy defender and a world-class tackler who is also active in the passing game with 49 attempts per 90 both domestically and in Europe.

He can also make last-ditch challenges, as evidenced in the Champions League qualifier against Partizan (below) where he makes up about ten yards and intervenes before the shot. 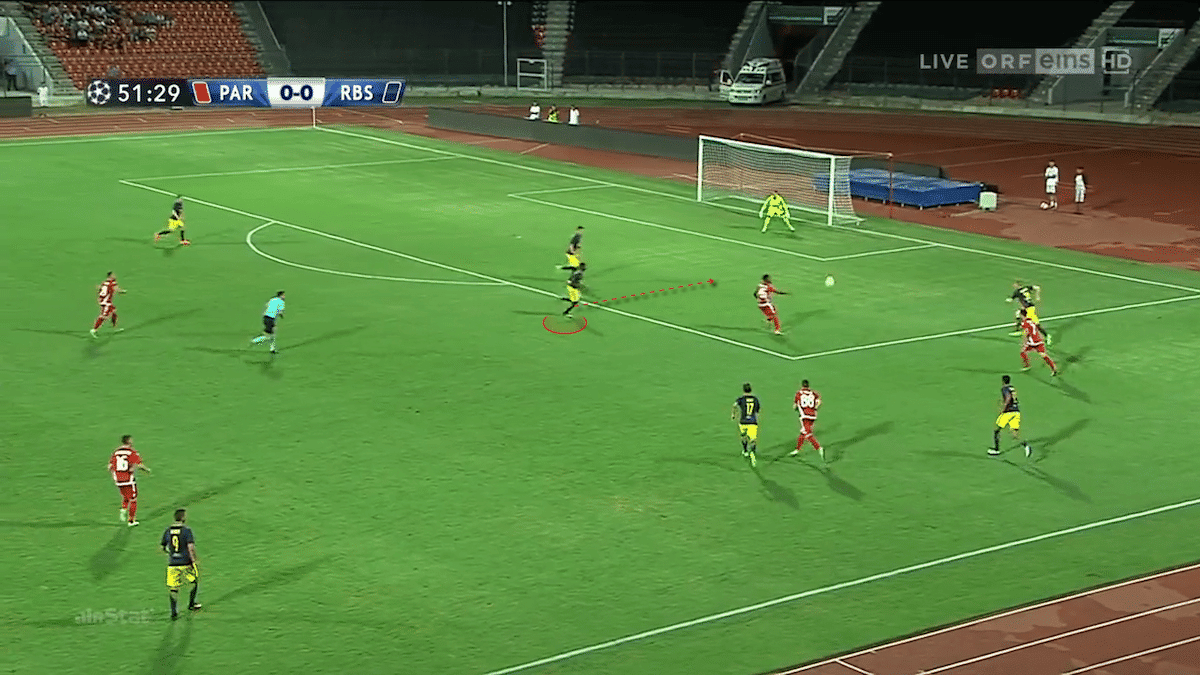 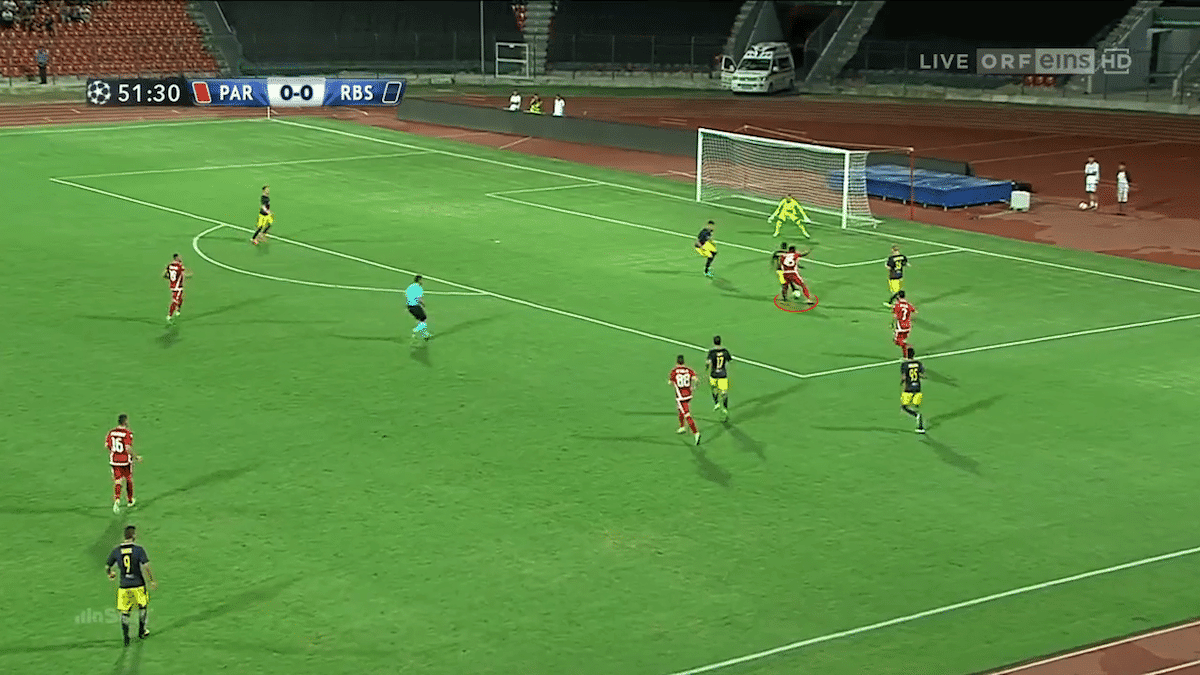 In the Austrian Bundesliga he reigns supreme in all defensive categories, ranking sixth and 14th respectively for tackles and interceptions.

In the Europa League he is ranked fourth among all players (behind team-mates Haidara (43) and Lainer (45), who both played 200 more minutes than him) with 41 successful tackles.

He’s able to use those superb defensive instincts to put pressure on opponents which lead to great counter-pressing opportunities for Salzburg.

Perhaps due to his experience as an offensive midfielder earlier in his career, Samassékou is also blessed with very solid technique and offers great pressing resistance because of his excellent mobility.

His initial touches to get away from pressure are highly successful and the Salzburg midfielder often initiates counter attacks and transitions.

With 17 total open play key passes in the league and a ratio of 2.5:1 when it comes to forward vs. backward passes, he’s a solid playmaker. When given time Samassékou is also capable of identifying diagonal runs and playing wonderful chipped passes (below). 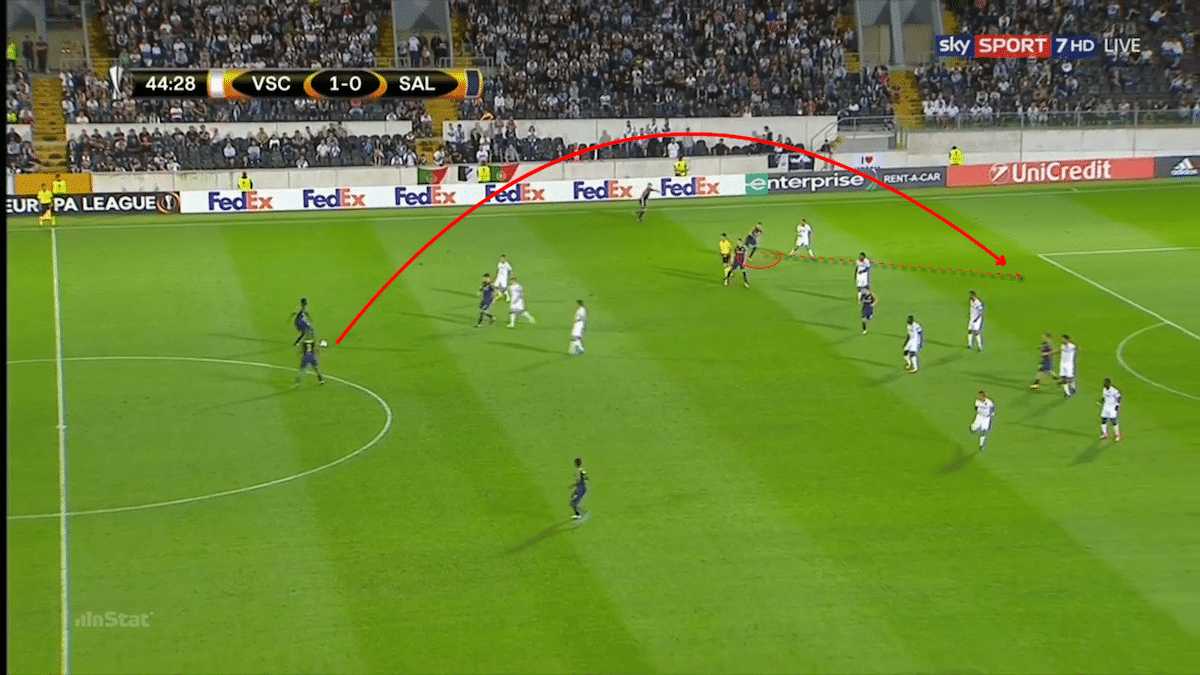 There are a couple of discernible shortcomings for the Bamako-born midfielder. Samassékou is sometimes prone to dwelling on the ball and can be dispossessed too often – at a rate of almost once a game domestically and in Europe as well.

Although he wins 1.83 aerial duels per 90 in Austria, at 5ft 8ins, Samassékou gets beaten in the air and occasionally loses his marker on set pieces.

Finally, at times, he seems a little too excited to press. The Mali midfielder has shown his overeagerness can leave his team in a precarious spot when he fails to get to the ball because of William Hill promo code, leaving a huge hole behind him.

At 0.49 take-ons per game, Samassékou is definitely not Keïta, but comparing any defensive midfielder to the Guinean is a like comparing strikers to Cristiano Ronaldo or Lionel Messi.

Keïta has otherworldly dribbling skills and can progress the ball from the back while defending and pressing like a defensive midfielder. In addition to that, the future Liverpool man can also play like a box-to-box midfielder and even, on occasion, as a No.10. 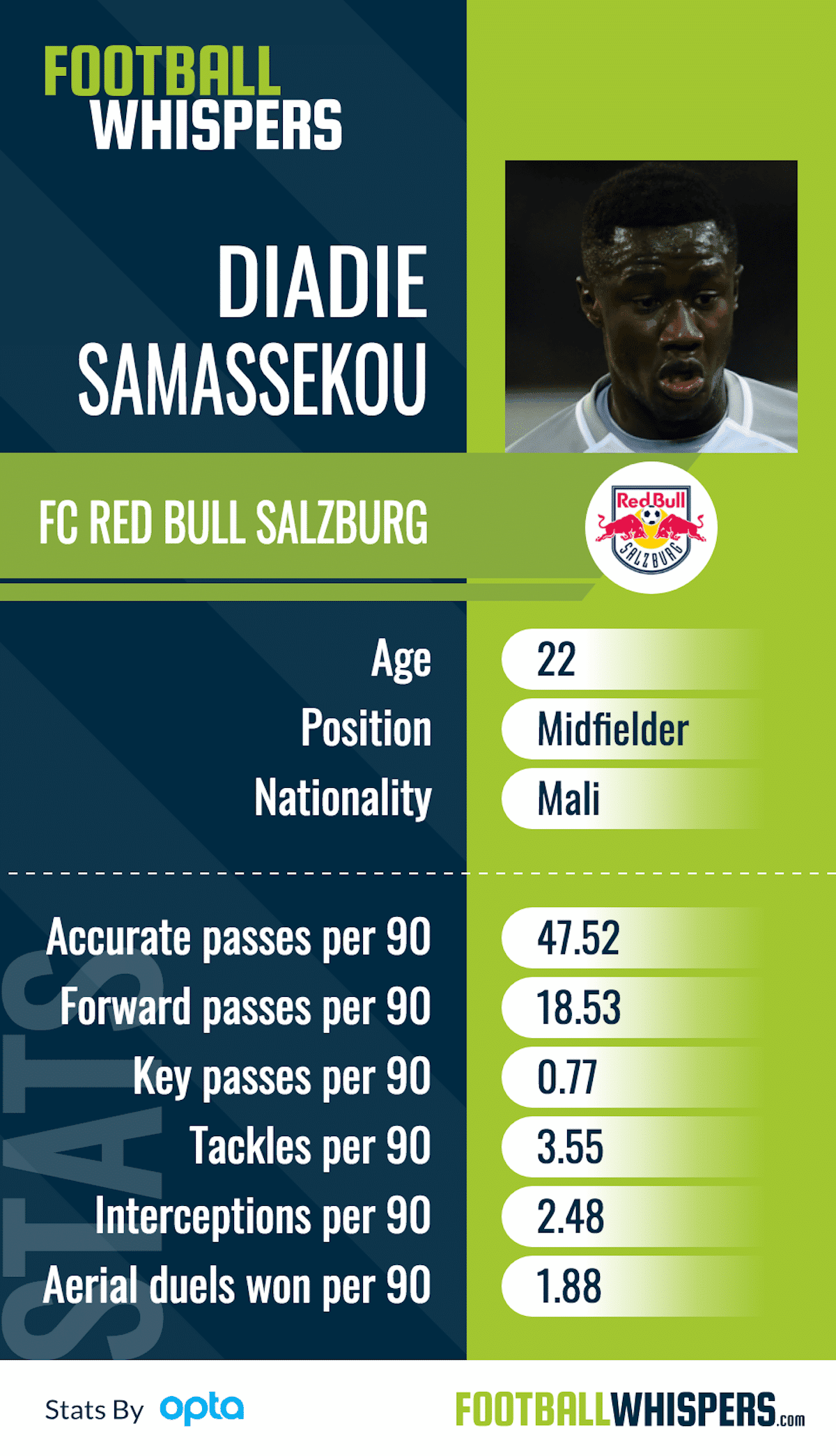 Simply put, Keïta is a glitch in the system, a potentially transcendent player. Samassékou is an excellent defensive midfielder, nearly impossible to beat one on one, while also pressing aggressively.

In addition, the Salzburg man offers great press-resistance and ball-retention while also bringing an element of verticality in the passing game. His game is much more reminiscent of Leicester City‘s Wilfred Ndidi or Chelsea's N'Golo Kanté.