It was in season one of Game of Thrones that Cersei Lannister, wife to the king, delivered one of the series defining sentences. “When you play the game of thrones, you win or you die. There is no middle ground.”

It was a warning. A threat delivered to Ned Stark – Warden of the North, who had threatened to reveal Cersei's big secret – that taking on the establishment would be a foolhardy and reckless move.

Rafael Benítez, having guided the Magpies to Premier League safety for the second consecutive year, is out of contract at the end of the season. He is keen to remain at St James' Park, happy to defend the club from Tyneside, but he wants something from those at the top.

Namely, gold. The Spaniard knows without money to spend on reinforcements Newcastle will once again be embroiled in a battle for survival next term. And he is prepared to challenge owner Mike Ashley to get it.

“Every year is different and teams are spending more money,” Benitez said at the weekend. “The teams between seventh and 12th, how much money have they spent? £100m with the wages that they pay? So if we want to compete with them we have to maximise what we've got.”

Benítez accepts attracting players to Newcastle is difficult. Yet it is far from impossible. And there are few cities in England as passionate about their club – as we know from Game of Thrones: the North never forgets.

This fervour is a selling point, one which the Magpies have failed to take advantage of in recent years. Perhaps that could change this summer if Benítez remains at the club.

So what does the Spaniard want? Three dragons? Not exactly. He wants to strengthen his attack; Salomón Rondón, currently on loan, is the first choice but there are alternatives.

Meanwhile, the midfield needs improving, especially if Isaac Hayden departs as expected. And one name on the club's shortlist is Andreas Samaris, the Greek international who currently plays for Benfica.

Newcastle's interest in the 29-year-old is longstanding. They were first linked with him back in the summer of 2017 and made another approach in January. A move has never come to fruition, largely because the Portuguese club were unwilling to sell.

However, things are now different. Samaris is out of contract at the end of the campaign and Benfica president Luis Filipe Vieira has admitted a renewal is unlikely.

“In due course we will decide but our priority is always Benfica,” he told Portuguese newspaper A Bola this week. “We will only offer what we can and only those players will stay who want to be at Benfica. That is the case for any player.”

The fact Samaris will not cost a fee will appeal to the Newcastle hierarchy, so should the Magpies make a move this summer and, if so, what would the Greek midfielder bring to the side?

In a word, aggression. Samaris is a combative presence at the Benfica midfield. His work isn't always pretty, or particularly eye-catching, but it has been vital in helping the Eagles soar to the top of the Primeira Liga table during the second half of the campaign.

Prior to the arrival of Bruno Lage on January 14, the Greece international had featured for just six minutes in the league season. But the Portuguese coach immediately inserted Samaris into the centre of his four-man midfield.

Benfica have played 13 Primeira Liga games since – all of which Samaris has started in – and they have dropped just two points. 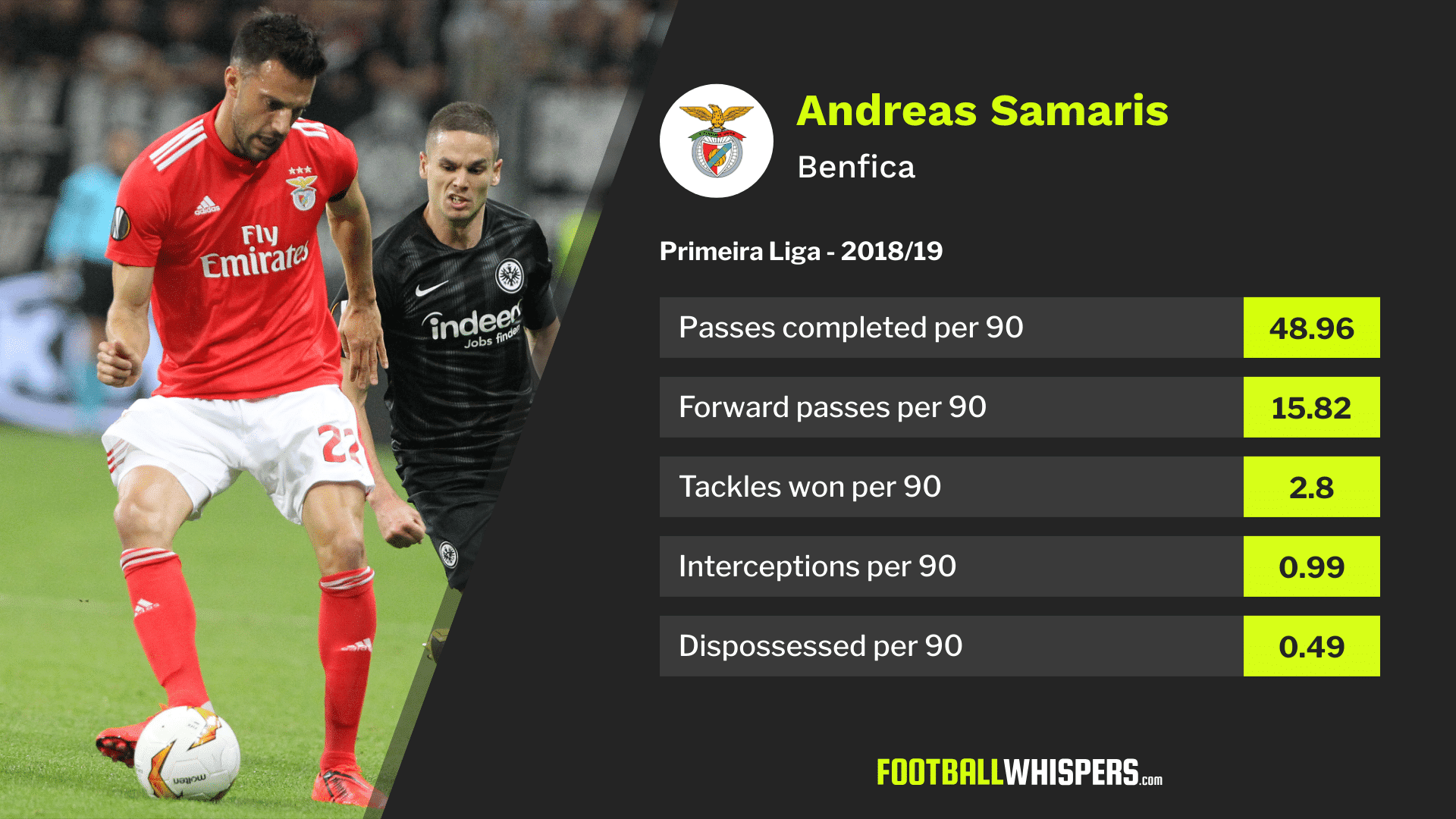 It would be too simplistic to claim the former Olympiacos star is the reason behind that upturn in form. He has been a big factor, however.

It's clear that, when stationed in front of the defence, Samaris can be an effective wrecking ball. Premier League sides, though, tend to need a little more from their midfielders, they need to be able to influence games with or without the ball.

Importantly, Samaris does so. While his defensive numbers are impressive, he is also an influence when in possession. He completes 48.18 passes per 90 – an average only seven midfielders can better – and 15.74 of these advance play up the pitch. He also creates 0.24 big chances per 90, which puts him among the top 25.

It's clear the 29-year-old would be a worthwhile addition for Newcastle. He could become the dominant and destructive presence in the Magpies midfield, one who could go toe-to-toe with the most physical of Premier League players but also help build and maintain attacks.

And if Benítez is going to win Newcastle's very own game of thrones, it's the smart, calculated moves, such as signing Samaris for nothing, which will help him do so.