With his treble made up entirely of headed goals, the powerful West Bromwich Albion striker became only the second player in Premier League history to nod home three times in a single game. Everton cult-hero Duncan Ferguson was the first man to achieve the feat when netting a hat-trick of headers against Bolton Wanderers back in 1997.

Much like ‘Big Dunc', Rondon is an aerial powerhouse, but he is also a diverse and adaptable striker capable of demonstrating strength and subtlety in equal measure.

The 3-1 victory over the Swans at the Hawthorns saw Rondon ending a nine-game barren patch in emphatic fashion. Although he may not be as prolific as some of the division’s most lauded attackers, the Venezuelan deserves credit for the regularity with which he manages to find the net, despite playing within a team whose emphasis is so often towards the defensive side of the game.

The 27-year-old target man was picked up by the Baggies in the summer of 2015 from Zenit Saint Petersburg for a club record fee of £12 million. Having bounced around various teams for most of his career — with spells at Las Palmas, Valencia and Rubin Kazan since leaving his homeland in 2008 — Rondon appears to have settled in the West Midlands, and Tony Pulis’ side are reaping the benefits of the striker’s growing understanding with his team-mates. 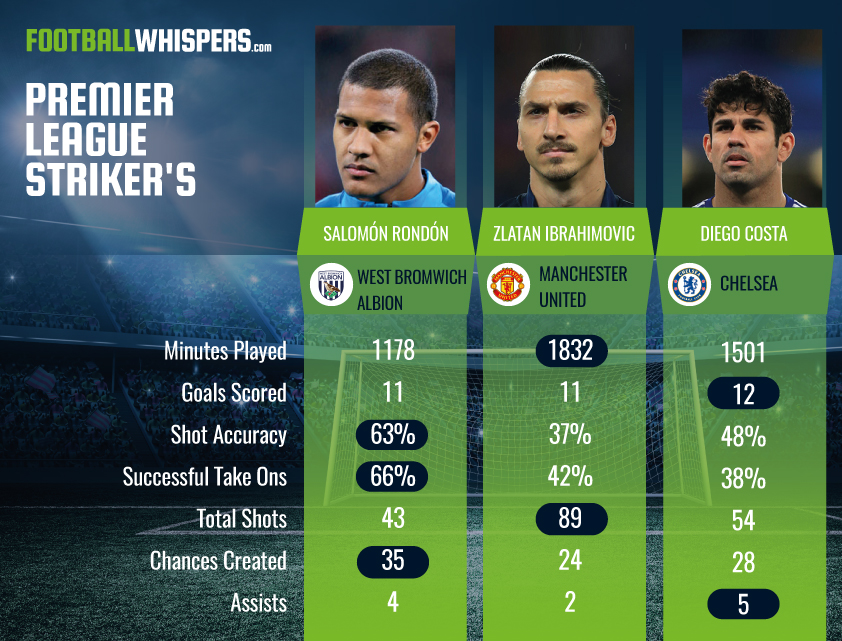 In his first campaign with West Brom, Rondon produced a respectable, if unspectacular, return of nine goals from 34 Premier League games, helping his side to finish 14th in the table. This term, the Baggies are riding high in seventh, just one place and three points behind Saturday’s opponents Manchester United; Rondon’s ability to lead the line and act as a focal point through which all of his side’s attacking manoeuvres are filtered has been key to their ascent into the top half.

He may not be blessed with electrifying pace, but Rondon is perhaps more athletic than he is given credit for. You are unlikely to see the 57-cap Venezuelan international jinking beyond three or four players in a way that many of the great South American stars have been able to through the years, but with his touch and supreme upper-body strength, he is able to shield the ball from his marker before bypassing multiple opponents with a perfectly weighted pass. 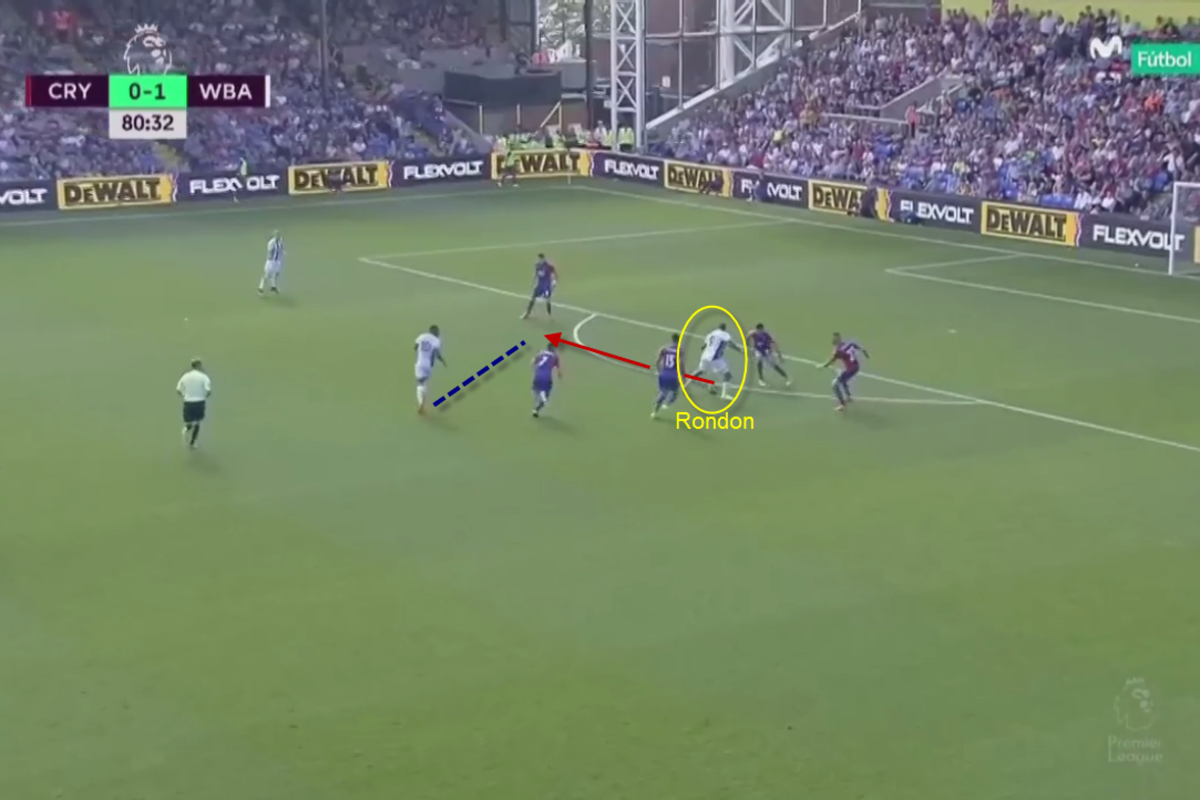 Rondon’s most obvious attribute is his aerial prowess, as evidenced by his headed hat-trick. But, while he is certainly well adept at finishing chances with his head, the key to his success in the air is the way he is able to escape the attention of defenders with intelligent movement.

The former Zenit man has a remarkable knack for pulling off of the shoulder of his marker before reappearing in the space between the opposition’s two central defenders. This is exactly how he plundered two of his three goals against Swansea. 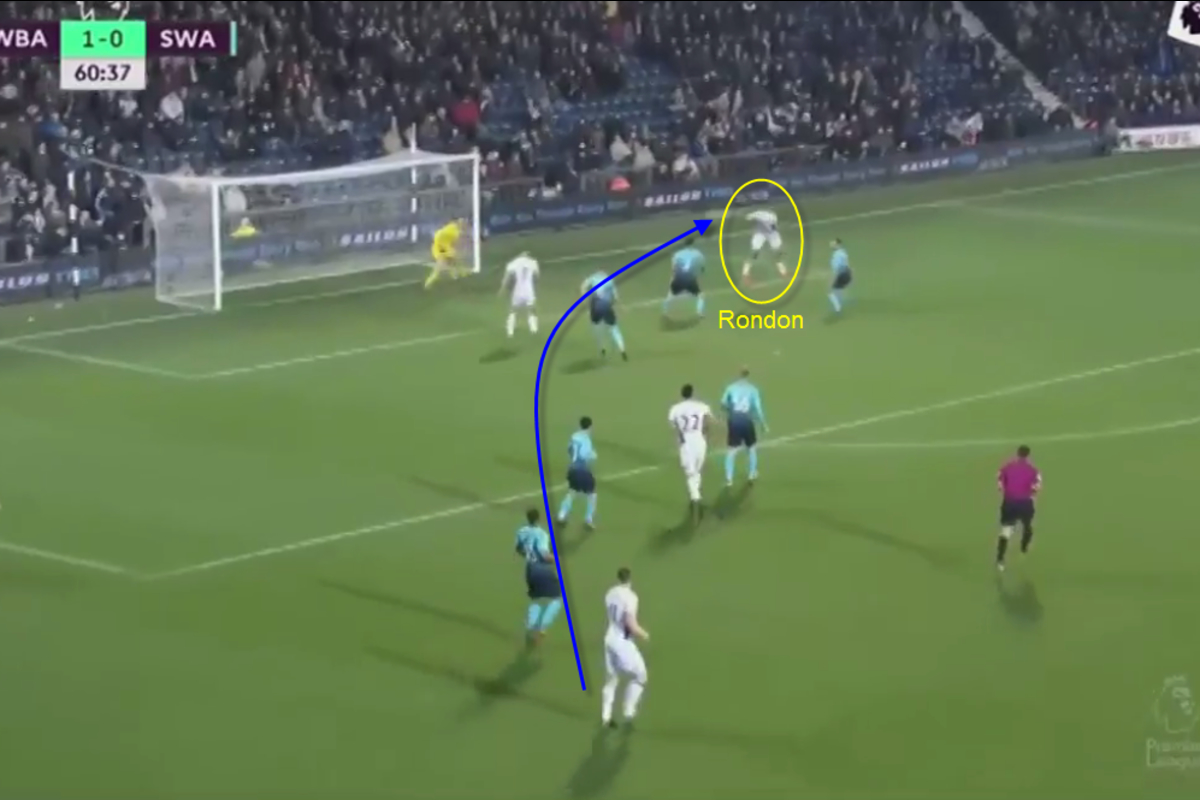 Similar movement within the penalty area also saw Rondon evade and confuse Manchester United’s Daley Blind at the Hawthorns last season, when he slipped away from the Dutch defender before smashing a powerful finish beyond David de Gea.

He’s unlikely to trouble the upper echelons of the Premier League’s scoring charts any time soon, but Rondon’s progression and importance to how his team operates could soon see him elevated to the status of one of the divisions most proficient marksmen.

To use Chelsea’s Diego Costa – the current leader in the race for the Golden Boot – and Manchester United’s Zlatan Ibrahimovic as a point of reference, Rondon’s statistical performance this season is comparable to the top-class pair by many of the metrics by which strikers are judged.

For example, with a shot accuracy of 34 percent, the West Brom star finds the target with a similar degree of assuredness as Ibrahimovic (37.1 percent), though both men trail the in-form Costa (48.1 percent) who rarely seems to miss at the moment.

Rondon wins more aerial duels than Costa, though, with a 30.9 percent success rate compared to the Brazil-born Spain international’s 23.8 percent. However, the 6ft 5ins Ibrahimovic is some way in front with 54.1 percent.

With 11 domestic goals from 1,832 minutes of action, Ibrahimovic finds the net every 166.5 minutes on average. Rondon’s seven goals from 1,390 minutes gives him a relatively similar average of 198.5 minutes played for every goal scored. Perhaps more telling is the fact that the West Brom player’s seven strikes have come from a total of just 47 shots, for an average of 6.71 shots per goal; the Swedish icon has shot for goal 89 times, meaning he finds the net once for every eight shots taken. Costa has been far more efficient than both men in this regard: his shot-to-goals ratio stands at 4.5, with a goal scored every 125 minutes. 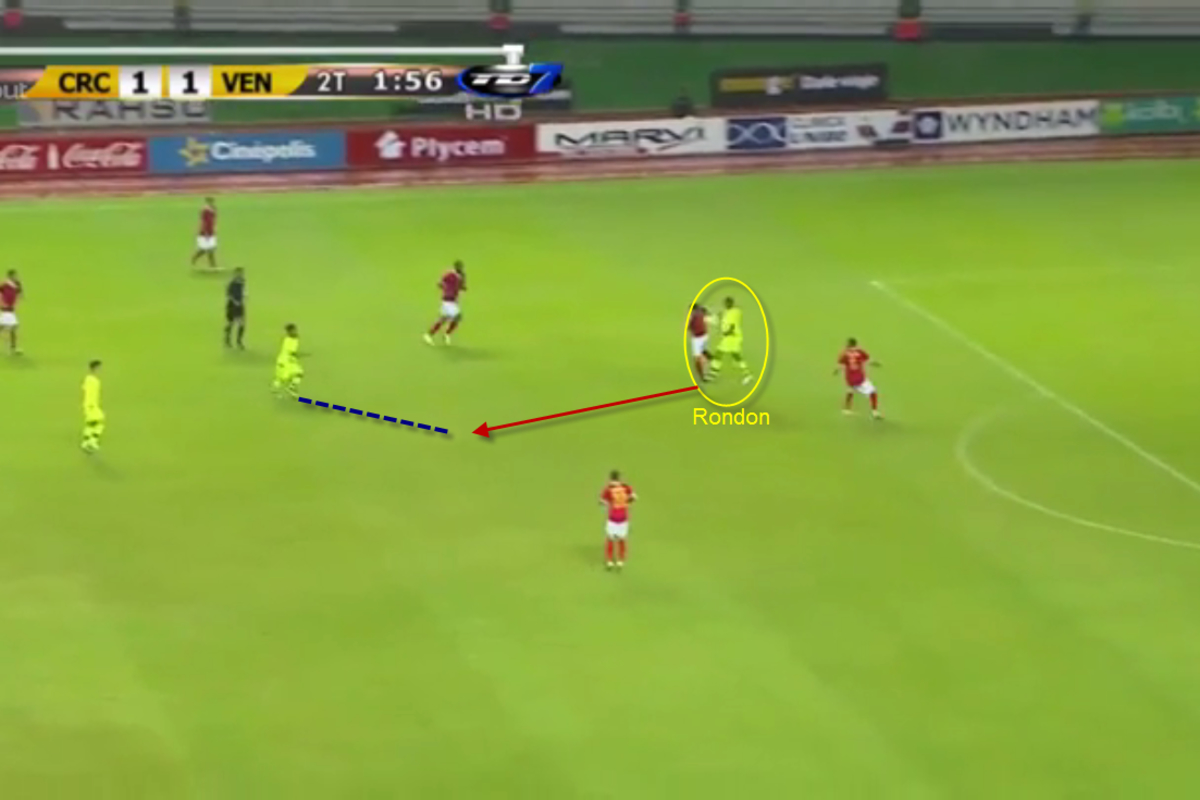 With seven goals and two assists, Rondon has been directly involved in 39.1 of his side’s goals this season. He is unable to match the elite-level pair in this regard as Costa has scored or assisted exactly half of Chelsea’s league goals, while Ibrahimovic has contributed to 59 percent of United’s strikes.

Rondon also falls behind Costa and Ibrahimovic when it comes to pass accuracy; finding a team-mate with 67 percent of his passes leaves him adrift of the Chelsea and United stars, who have a pass completion rate of 76.2 percent and 75.9 percent respectively. This disparity could perhaps be partly explained by the fact that West Brom cannot boast the same level of attacking options as the Blues and the Red Devils; Rondon’s passes may find their target more regularly if there were an array of world-class recipients to aim for.

So the statistics show that the Venezuelan is still a notch or two below the Premier League’s most elite marksmen. But, with a growing role in an improving side, Rondon is steadily closing the gap.