Salford hopes for a playoff spot when they host Mansfield on Sunday 24th April 2020. But the question is, will they edge out the resurgent visitors? More details in our match analysis and preview.

Take advantage of our three top predictions for this fixture below. Our predictions are bias-free and premised on data analysis and in-depth research of team stats.

At Least One Goal in First Half

In this fixture, no team has a better record against the other. But because both teams face each other after a good run of results in their last five games, we expect at least a goal in the first half. Both teams have lost only one match in their last fixtures. Moreover, both teams have scored in three of their last five games. Salford welcomes Mansfield on the back of a 2-0 away victory a few days ago. Mansfield visits Salford after a 3-0 victory against Scunthorpe at home.

The reason we are backing to Salford to win is simple. Despite losing the reverse fixture 2-1, the hosts found the net. Salford is now 9th on the League Two table and only need three points to get into promotion playoffs spot. They have the third-best home record in League, winning nine, drawing 11 and losing only one game at home with only four fixtures to go. Moreover, given the significance of this fixture to the hosts, and their current good form; they look more likely to win than the visitors.

Are you looking for more stats and odds for Salford vs Mansfield? We have the best picks and the latest stats in the tables below.

With 52 points and four games to go, Mansfield is 14 points from the red zone. In other words, they are safe and are less bothered by the outcome of this fixture. Find out more in the team preview below.

Salford has every reason to play for a win in this fixture. Being 9th on the table leaves them three points off promotions playoff spot. After only one loss of 1-0 in their last six League Two fixtures, the hosts can get this done early on Saturday. Even more importantly, their home record speaks for itself. They have only lost one game so far at home and conceded 15 in 21 home fixtures.

Mansfield has also lost once in their last six fixtures. They play Salford after two consecutive victories. However, with little to fight for yet assured of remaining in League Two even with a point in the remaining four fixtures, placing a straight win bet on the visitors can be costly. 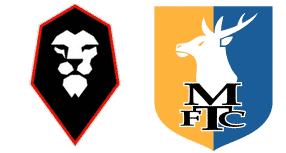 The fixture will be played at Peninsula venue Kersal, England.

Which team has the best record against the other in this fixture?

Both teams share equal victories against each other (1). There is no draw or loss between the two teams.

Which team are the bookies backing?

The bookies are giving Salford an edge against Mansfield.