Serie A's bottom club, Salernitana, play host to a Genoa side that sit 4pts and four places above them in the table. We're expecting a close and competitive 90-minutes between these two sides in a game that has the potential to be a goal-fest.

Here are our predictions for Salernitana vs Genoa

We've expecting goals in this game for both clubs as that has been the case in each of their last three league meetings. Each of Genoa's last five league games have ended with both teams getting on the scoreboard and Salernitana's last home game against Verona ended in a 2-2 draw.

Everything you need to know about Salernitana vs Genoa

Salernitana looking to secure their first win of the campaign

Salernitana's winless start to the season continued away at Sassuolo last weekend as a solitary Berardi goal proved the difference between the two clubs. Salernitana have now managed to secure 1pt from their opening six league games, that point arrived in the club's last home game against Verona which ended 2-2. Although it is still very early in the season, Salernitana look highly likely to go back down to Serie B at the first time of asking unless they can start keeping things tight at the back and add more goals to their game.

Genoa's last game at home to Verona proved to be one of the most action-packed 90-minutes of the entire season so far. The visitors went 2-0 up and Genoa did even begin their comeback until Criscito converted a 76th-minute penalty. Destro then scored twice in the space of 5-minutes to thrust Genoa into a 3-2 lead with very little time left on the clock. However, Kalinic equalised for Verona in stoppage time to make the final score 3-3.

Salernitana: the hosts could be without Capezzi, Aya and Ruggeri this weekend due to injury.

Genoa: Biraschi, Sturaro, Caicedo and Cassata could all miss the trip to Salernitana through injury. 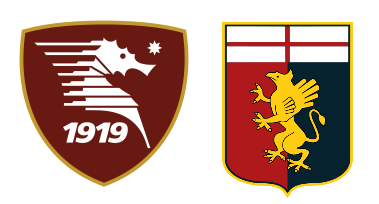