Liverpool rely on him to get into high-quality goalscoring areas on a regular basis in the absence of a pure, clinical forward. His team-mates rely on him to finish off the sweeping team moves they put together.

And while Salah has remained fairly consistent for the majority of the season, even when the goals dried up, it's the unpredictability he's added to his game over the past week that the Reds are now benefiting from.

The Liverpool No.11 has scored in back to back Premier League games for the first time since December.

Perhaps two of the most important goals he's ever scored for the Merseysiders, the first put Liverpool ahead against Southampton as the Reds went on to complete their comeback and claim top spot once again.

The wonder strike against Chelsea, just two minutes after Sadio Mané headed the home side ahead, all but ended the contest. The knockout blow with Maurizio Sarri's men still reeling from the first blow the Reds landed.

The weekend came to a close with Klopp's charges sitting pretty at the summit.

Salah scoring goals is nothing new. He's found the back of the net on 51 occasions for Liverpool in 70 appearances since his move from AS Roma ahead of the 2017/18 season.

However, goals from distance are a rarity for the Egyptian. Last season he managed just three in the Premier League, one of which being the audacious effort against Manchester City when Ederson was stranded in no man's land. 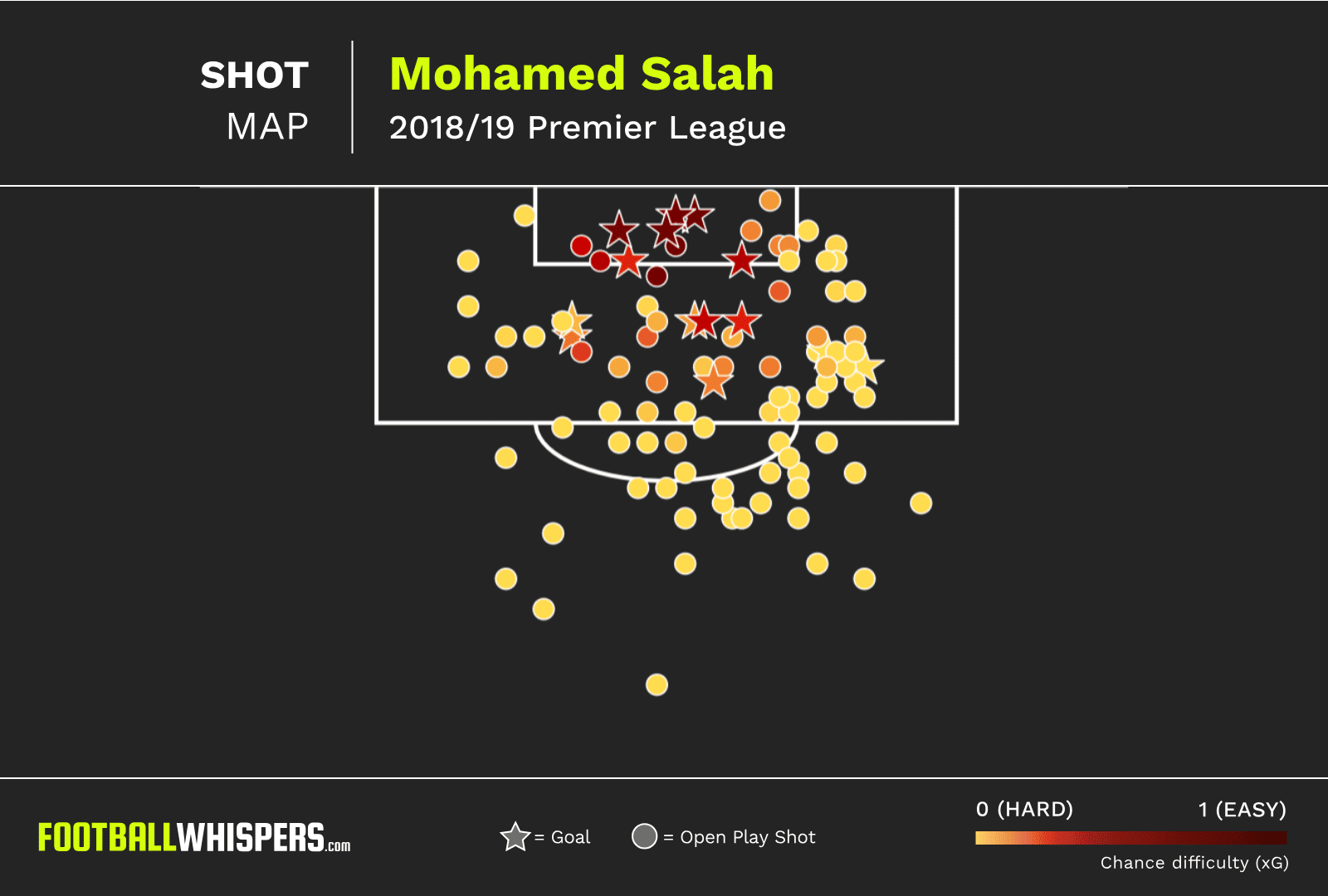 The graphic above shows Salah's shot map for the 2018/19 season prior to the Southampton game. You can see the Liverpool No.11 isn't afraid to shoot from distance but his efforts weren't resulting in goals.

While he was adding value to his efforts, his post-shot xG90 was 0.04 up on his xG90 average, it wasn't at a rate in which his efforts from distance worried the opposition. 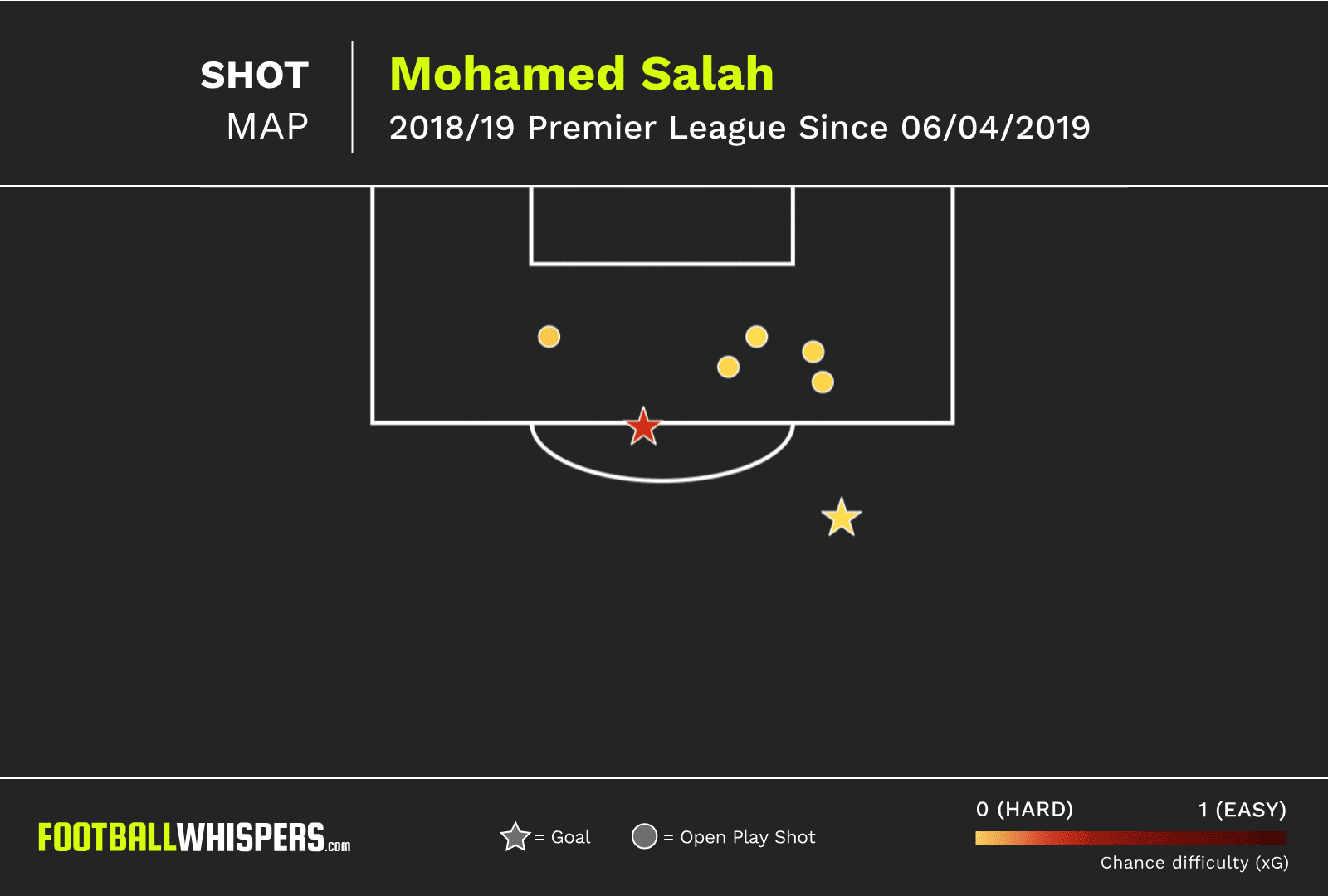 This has changed in the past two Premier League matches. He's taken seven shots in total with two outside the penalty area. Both of those strikes resulted in a goal.

Now, in isolation, there's an argument to suggest that his strike against Chelsea was just a fortunate swing of his left foot. And, yes, the sample size is small, but the stats point towards Salah being more efficient with his shots.

He's taking the same amount of shots per 90, as shown in the graphic below, but his shot accuracy has risen by 10 per cent. Prior to the Southampton game, 47.1 per cent of his efforts found the target. In the two games since has climbed to 57.3 per cent. 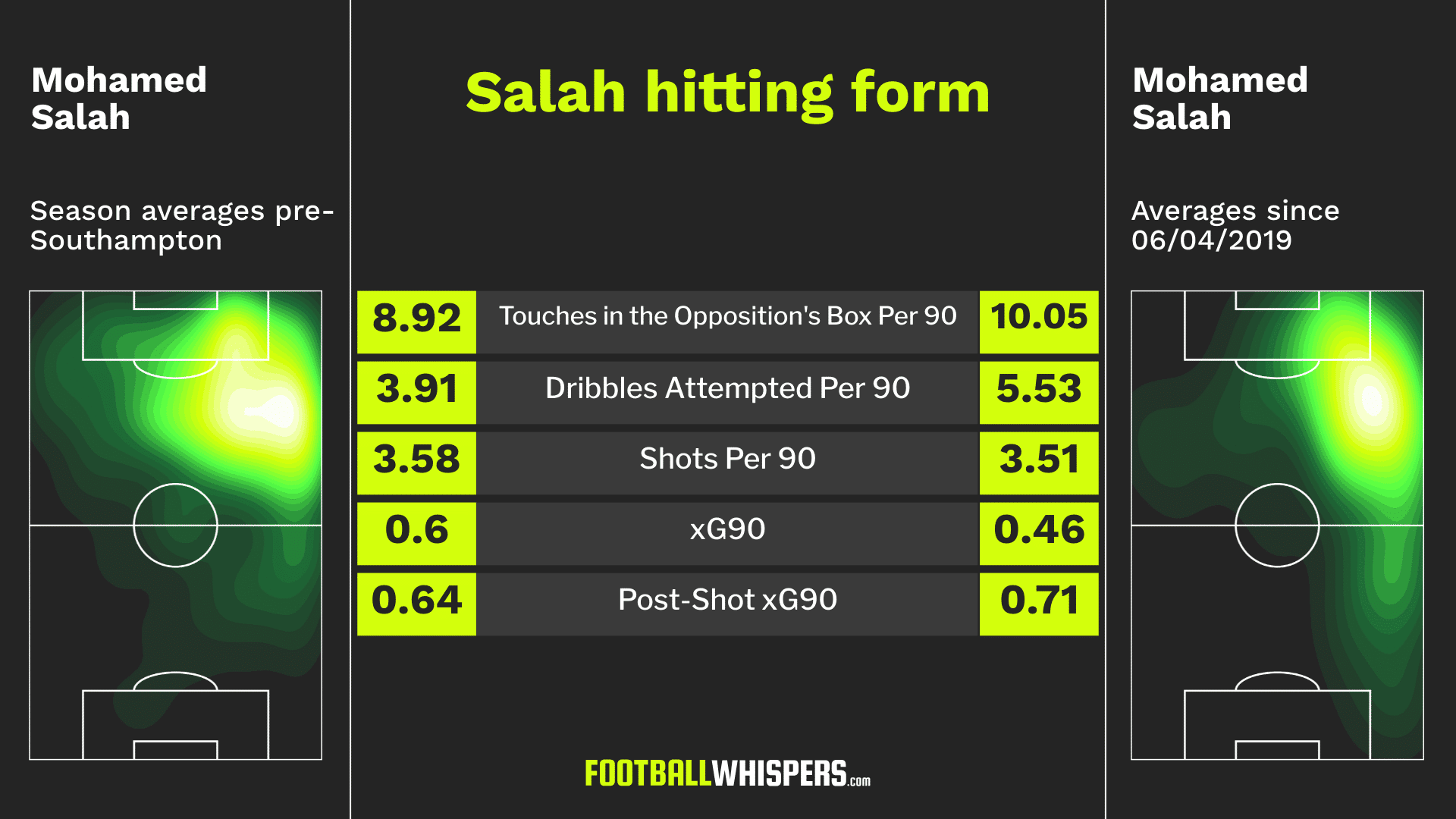 In the games against Southampton and Chelsea, his game has been much more rounded. He's had more touches in the opposition's penalty area and he's attempted more dribbles.

He's causing panic, creating chaos and still getting into high-quality goalscoring areas. His xG90 has dropped off from 0.6 to 0.46 but the real improvement comes when looking at his post-shot xG90 numbers.

His season average sees him add 0.04 to hit shot quality. In the past two matches, he's added 0.25. When Liverpool needed it most, Salah showed he was much more than just a poacher relying on the sheer volume of opportunities to score his goals.

Of course, the Reds need him to be a reliable goalscorer. But with the finish line in sight, Salah's unpredictability from long distances may be what delivers the club it's first ever Premier League crown.