Over recent weeks Liverpool have been linked with a number of wide forwards.

Lucas Moura, Julian Brandt, Ramadan Sobhi and Alex Oxlade-Chamberlain are all players who could fill that role. It's an obvious area to improve with the Reds struggling to break down teams without Sadio Mané.

The former Southampton man has been a game changer for the Merseysiders since his £30million move last summer. However, they've almost become overly reliant on him with no other player in the squad offering what he does.

Roma's Mohamed Salah has emerged as a top summer transfer target for Liverpool. The former Chelsea winger is having is most productive season to date having been involved in 24 Serie A goals.

He's the sort of signing who could be the difference between finishing top four and challenging for the title. With this in mind, we've taken to Football Manager 2017 to see the sort of impact Salah would have on Jürgen Klopp's Liverpool side.

We moved the Egyptian to Anfield in the summer of 2016 and simulated two full seasons before analysing the results.

READ MORE: 7 ATTACKERS LIVERPOOL COULD TARGET TO ALLOW COUTINHO TO PLAY IN MIDFIELD

Salah arrived at Anfield and found himself as nothing more than a squad player to start off with. Klopp's Liverpool played a 4-2-3-1 system and the Egyptian acted as a supplement to Philippe Coutinho, who started on the left of three, and Mané, who was playing on the right.

During his first season on Merseyside he started just the 11 Premier League matches. He made a further 18 appearances off the bench and finished the campaign with six goals and two assists. He was involved in 12 goals throughout the season in all competitions.

The following campaign saw an increase in playing time for the former Basel man. Mané left the Reds after just 12 months under Klopp and moved to Barcelona for £50million. Salah made the right-wing role his own. He made 20 more starts than he did the previous year but this resulted in just one extra goal.

It's easy to see why it wasn't easy for Salah to make an impact on the Liverpool team. Adam Lallana, playing as an attacking midfielder behind Roberto Firmino, was like a man possessed.

He finished with 28 league goals in two seasons and added a further 13 assists. Imagine him posting such numbers in real life…

Firmino got the nod ahead of Divock Origi and Daniel Sturridge to lead the line. He missed just one Premier League match over both seasons and finished with 32 goals and 13 assists.

The first season was a disappointing one for the Reds. They finished in sixth position and missed out on Champions League football by two points as old rivals Manchester United pipped them to it.

Arsenal were crowned champions as Arsene Wenger's men romped to victory by finishing 14 points clear of second placed Spurs with an impressive haul of 96 points.

At the other end of the table, and probably more disappointing that not finishing in the top four, Everton avoided relegation by a single point.

Liverpool finished as runners-up, two points behind Arsenal as the Premier League crown continued to elude them.

They went into the final game of the season with Southampton the visitors at Anfield knowing a win would guarantee them the title. They lost 2-1 with Firmino getting Klopp's men back into the game in the 89th minute. The late drama ended there with Arsenal beating Manchester City to complete a dramatic final day of the season.

The game is too realistic at times.

Michael Keane arrived from Burnley for a deal which could eventually rise to £20million. Klopp raided the Bundesliga again with Leonardo Bittencourt arriving from Koln in a deal worth potentially £33million. The left-back issue was addressed with Jetro Willems arriving from PSV. 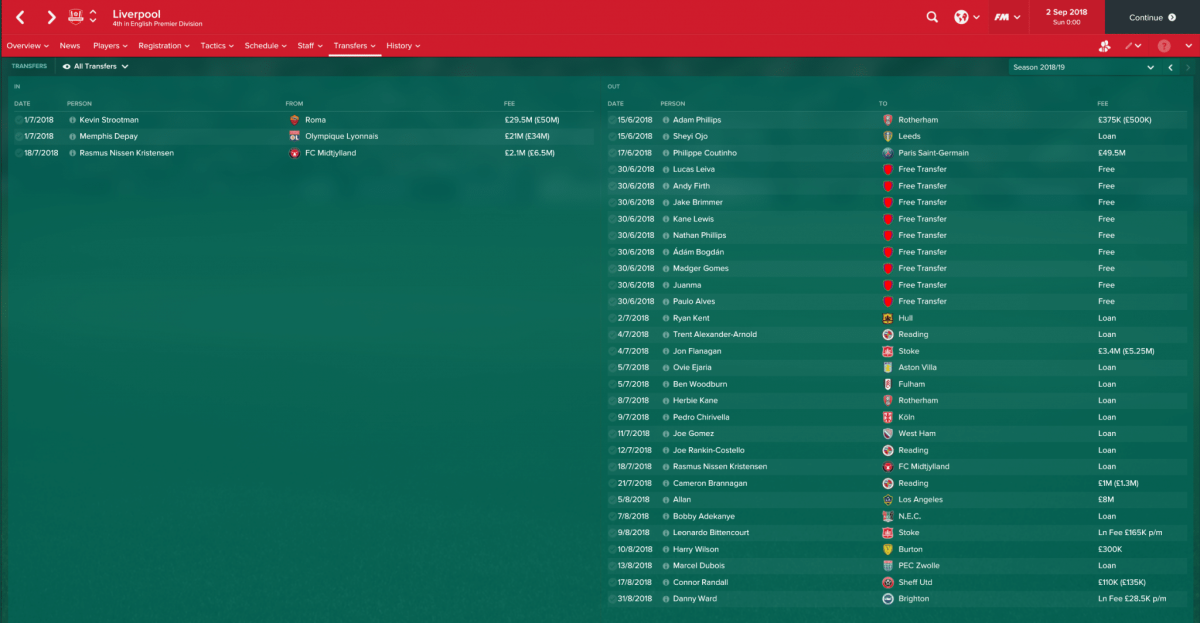 The 2018 window saw another star leave in the form of Philippe Coutinho who joined Paris Saint-Germain for £49million.

The Reds signed yet another winger with former Red Devil Memphis Depay arriving from Lyon for an initial £21million. Roma's powerhouse midfielder Kevin Strootman joined the club in a deal which could eventually rise to £50million.

One thing's for sure, the Liverpool weren't against splashing the cash.

Depsite such an outlay over the past three summers the majority of the squad is still made up of players already at the club.

Loris Karius is the undoubted first-choice ‘keeper. Mamadou Sakho is the pick of the centre-backs alongside Michael Keane while Jordan Henderson is one of the starting centre-midfielders. Until Strootmans's arrival the former Sunderland man was being partnered in midfield by… James Milner.

The lovable German is still at the club despite there being plenty of change at some of the other Premier League clubs. He's got a 64 per cent win ratio with the Reds but he's failed to deliver a trophy in the three seasons he's been there.

They are, however, improving year upon year and had they held their nerve against the Saints on the final of the season he would have guided the club to their first title in over 25 years.

So, Salah wasn't a game changer by any stretch of the imagination on Football Manager but it doesn't mean he wouldn't be in real life. Read why we think the Roma man could transform the Liverpool attack.