It seems faintly ridiculous to wring something positive from a Liverpool performance which was mostly aptly summed up by their manager, Jürgen Klopp, saying he would have done a better job in stopping Tottenham Hotspur's goals.

That withering assessment of his defenders aside, Liverpool fans can once again point to Mohamed Salah as a reason to be joyful. Salah, signed from Roma in the summer for £36.9million, is fast becoming one of the best signings the Reds have made in years as he continued his impressive re-integration into the Premier League on Sunday.

Salah endured a torrid time during his first stint in England with Chelsea, but he is a more rounded and effective attacker than the precocious 21-year-old José Mourinho bought from Basel in 2014.

Liverpool missed out on Salah then but were quick to snap him up this time around, announcing the club record transfer back in June.

Speaking of Salah's arrival, Klopp said he was “hungry, willing and eager to be better,” and the 25-year-old's performances have reflected as much so far.

And Sunday's defeat, as disheartening as it was, was no different. Although far from perfect, Salah was one of the precious few in red who could have left Wembley with his head held high.

Salah's initiation at Anfield has been so smooth that even the great Diego Maradona, who was in attendance at Wembley, offered a glowing appraisal of his recent form.

“Salah is a brilliant player who can move right and left, and he can score goals using his leg as well as his head,” Maradona said.

When Maradona describes you as “brilliant,” you must be doing something right.

EFFECTIVE OUTLET ON THE RIGHT

Although Liverpool were ripped to shreds by Tottenham's devastating counter-attacks, the Reds found their own joy down the right flank in Salah, with his blistering pace and off-the-ball movement once again brought into sharp focus.

Philippe Coutinho and Roberto Firmino have both been accused of “going missing” during the game – although the former did have one moment in the second half when he produced a glorious save from Hugo Lloris – but Salah was the solitary bright spark for Klopp as the German watched his defence crumble spectacularly.

When the teams were released before kick-off, eyes were drawn to Mauricio Pochettino deploying Serge Aurier on the left of his defence. The Argentine would later reveal that he felt the Frenchman's pace and mobility would be key in stopping Salah, who like to cut in on his left foot from the right wing.

However, Aurier struggled to deal with the winger's searing pace and dribbling skills at times. For Liverpool's only goal, Salah makes an intelligent run in between Aurier and Jan Vertonghen. Jordan Henderson finds the Egyptian with a brilliant ball and Salah leaves both defenders in his wake, running through before scuffing the ball past Lloris. 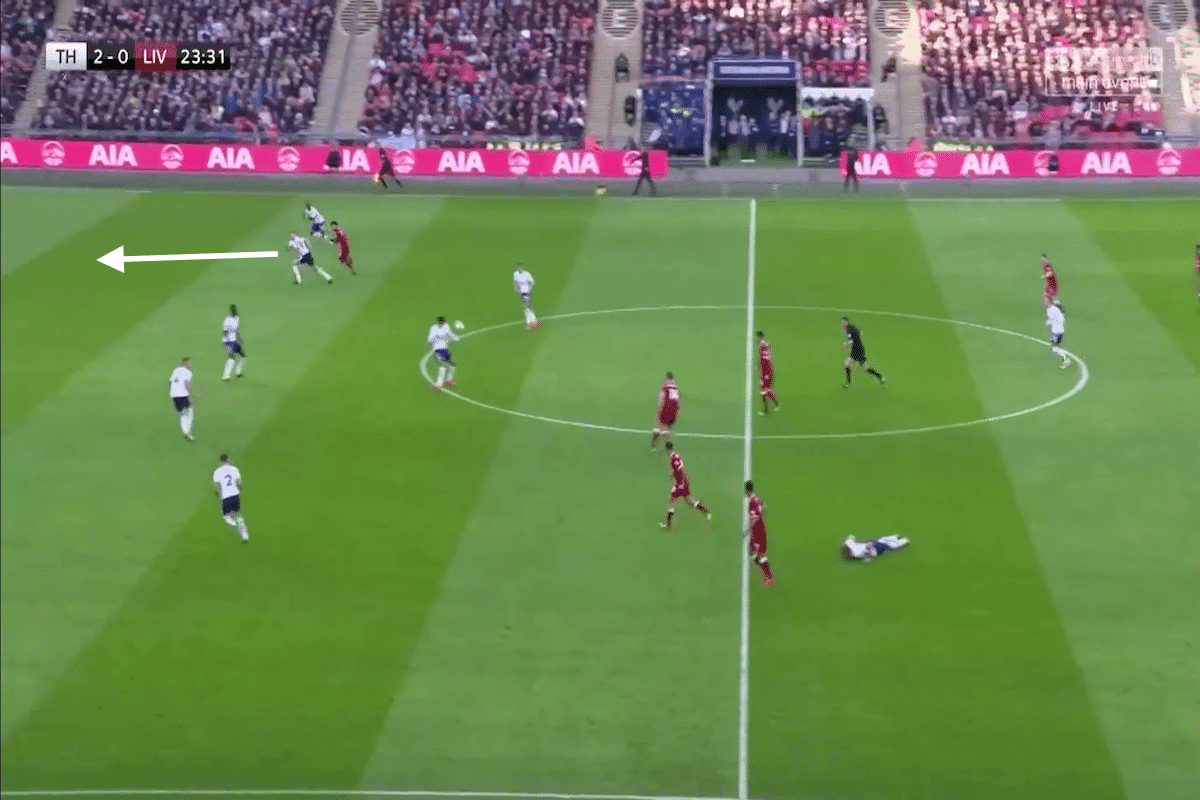 It felt as though, despite Aurier's pace, Liverpool had identified the former Paris Saint-Germain defender as the Spurs weak link – and looked to expose him. 50 per cent of Liverpool's attacks came down the right wing compared to 32 per cent down the left, as per WhoScored.

As you can see below, after Liverpool gained some momentum from Salah's goal, they started to push for an equaliser by exploring the outlet down the right flank once more.

As Coutinho picks up the ball, he sees Salah on the run once again. This time, Aurier just about matches him for pace but makes a reckless decision in going to ground early, which allows the winger to skip past him. It creates a dangerous situation for Spurs, but luckily Lloris is alert to Salah's intentions and gathers his cross. 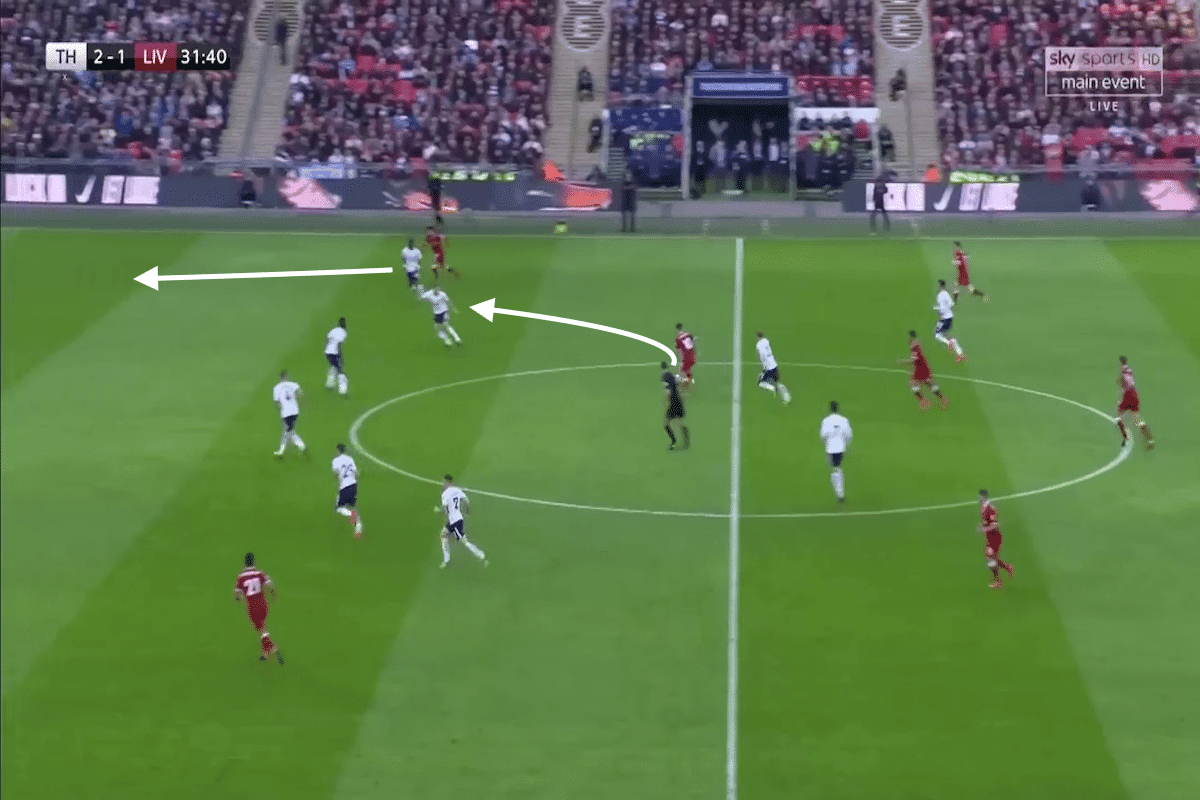 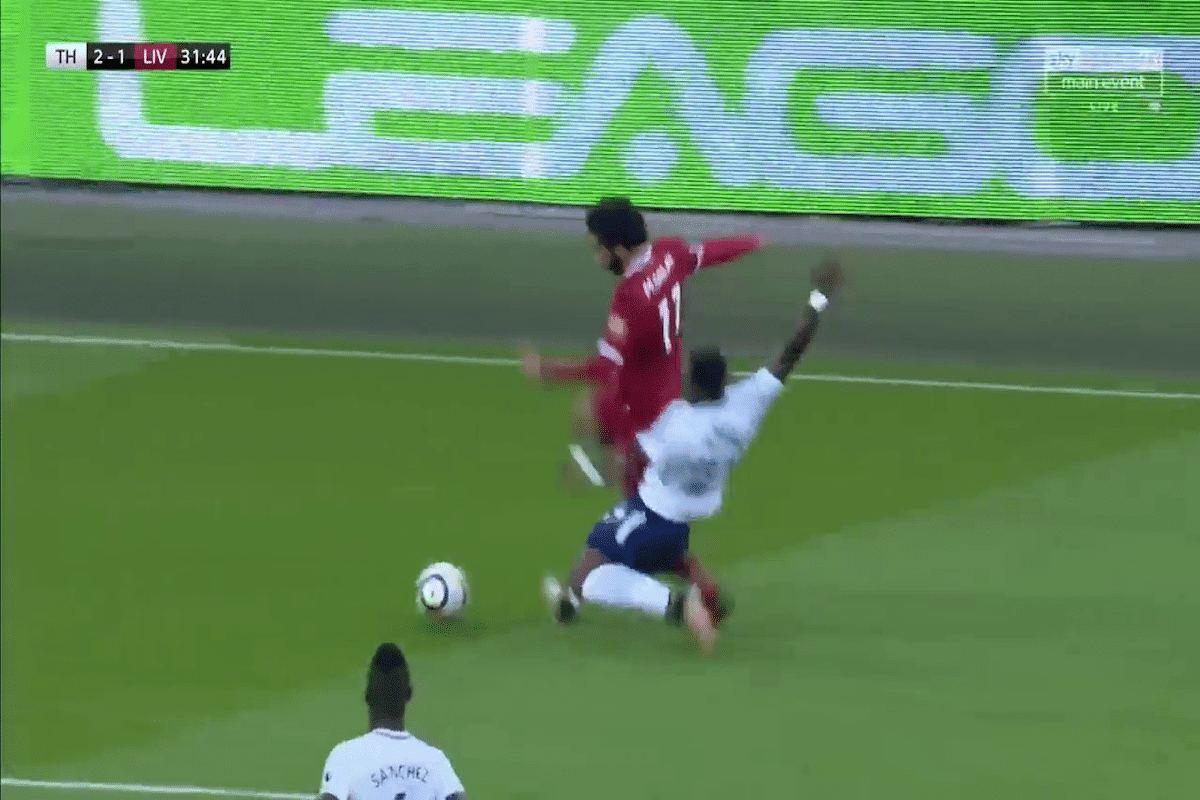 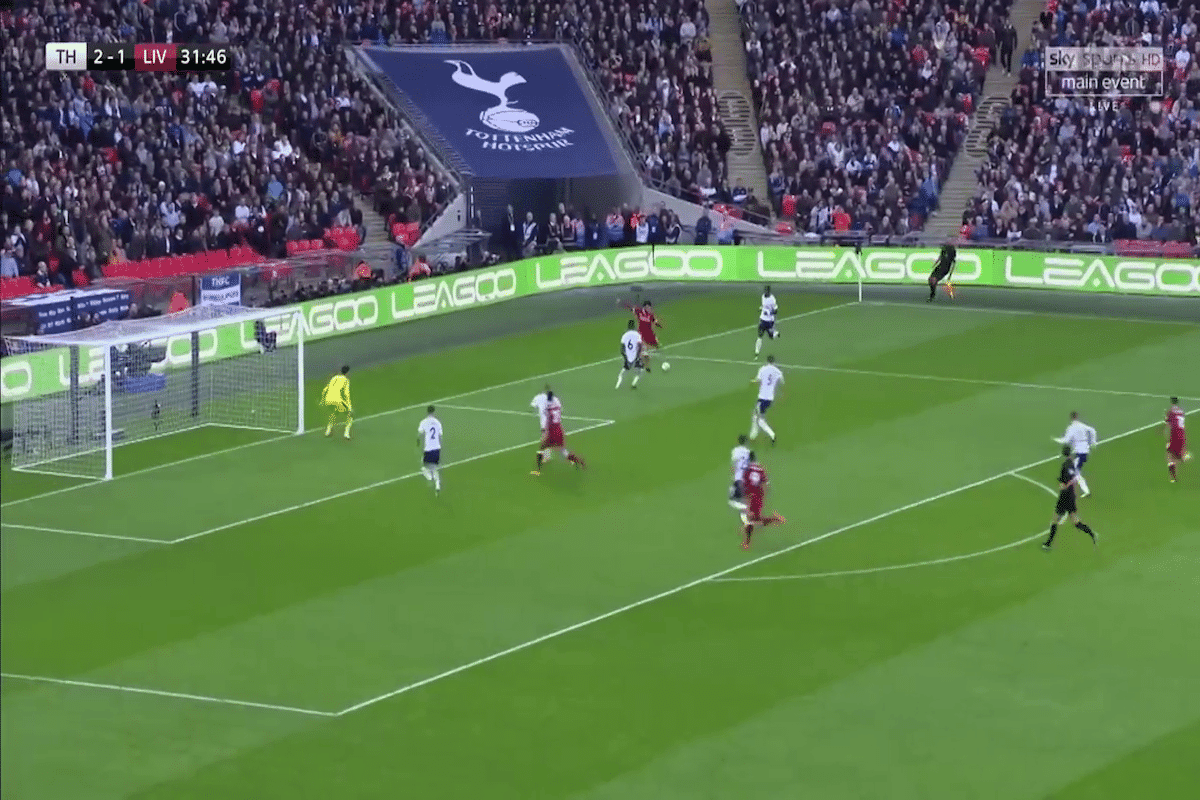 As mentioned earlier, Salah wasn't perfect. In the 78th minute, Alex Oxlade-Chamberlain robbed Aurier in possession and fed it to Salah, whose rather weak shot was saved by Lloris. While a natural striker may have been more clinical in such a situation, it showed Salah's continued sense of adventure to create such an opportunity.

SALAH HAS DELIVERED ON INITIAL PROMISE

There can be no denying his overall contribution this season either. In 14 appearances, he has managed nine goals and three assists. While he has missed his fair share of chances, he has still been Liverpool's most effective attacker and has helped fill the void left by Sadio Mané's absence.

Klopp's side lack a natural goalscorer. Whereas Brendan Rodgers had Luis Suárez and an in-form Daniel Sturridge, Klopp does not have a player who will get him 30 goals a season. Of course, that's not why Salah was signed. He was brought in to add more speed and depth to the Liverpool attack, and he has certainly delivered.

While he will be expected to improve his 18 per cent conversion rate (from 27 shots), his continued impressive form looks to be the only thing Liverpool can count on at the moment.

If Klopp is to turn things around at Anfield, there are deep-seated problems with his defence, who have now conceded 15 goals away from home in the league this season, three more than Crystal Palace who are bottom of the table.

The German will be expected to strengthen at the back significantly come January, with at least one new centre-back and possibly a goalkeeper. If he does that, then a bolstered defences coupled with Salah's ingenuity and invention at the other end may spell a brighter future for Liverpool this season.