When Sadio Mané walked straight down the tunnel at Molineux, Liverpool lost arguably their player of the season.

The Reds looked out of sorts against Wolverhampton Wanderers for the rest of the match. They lacked a spark in the final third and there were fears they could struggle without their No.10 over the coming weeks.

A late Roberto Firmino goal snatched the win for the relentless machine pieced together by Jürgen Klopp. Had the game ended 1-1 few would have argued it was an undeserved result.

With Liverpool in a battle for all three points against Nuno Espírito Santo’s men, every touch was being micro analysed. Mohamed Salah just happened to be at his frustrating worst on the night. He had six shots during the 84 minutes he was on the pitch – which equated to 46 per cent of the visitors' efforts – but hit the target with just two of those. His expected goal involvement was 0.45, with just 0.04 coming from expected assists.

He had opportunities to play in team-mates but opted to go alone. Many fans at the time described him as greedy and too selfish. It’s an accusation which has been levelled at him on numerous occasions this term.

His performance, combined with Liverpool’s lack of cohesion in attack, was a big talking point heading into the game with West Ham United. The Reds dropped points at the London Stadium last season and though their lead was much greater this time around, there was still a lot of football to be played.

All eyes were on Liverpool's talismanic No.11. And he didn’t disappoint.

The Egyptian looked a different player from the one fans had witnessed away to Wolves six days earlier. Yes, he had five shots without scoring in open play. But his display was much sharper. He was the creator-in-chief for the Reds, playing two key passes and getting an assist with an inch-perfect threaded ball into Alex Oxlade-Chamberlain’s path.

The former Roma man had a hand in everything good Liverpool did in the final third. When the Reds needed someone to step up and shoulder a bit more of the attacking burden, Salah came to the fore. 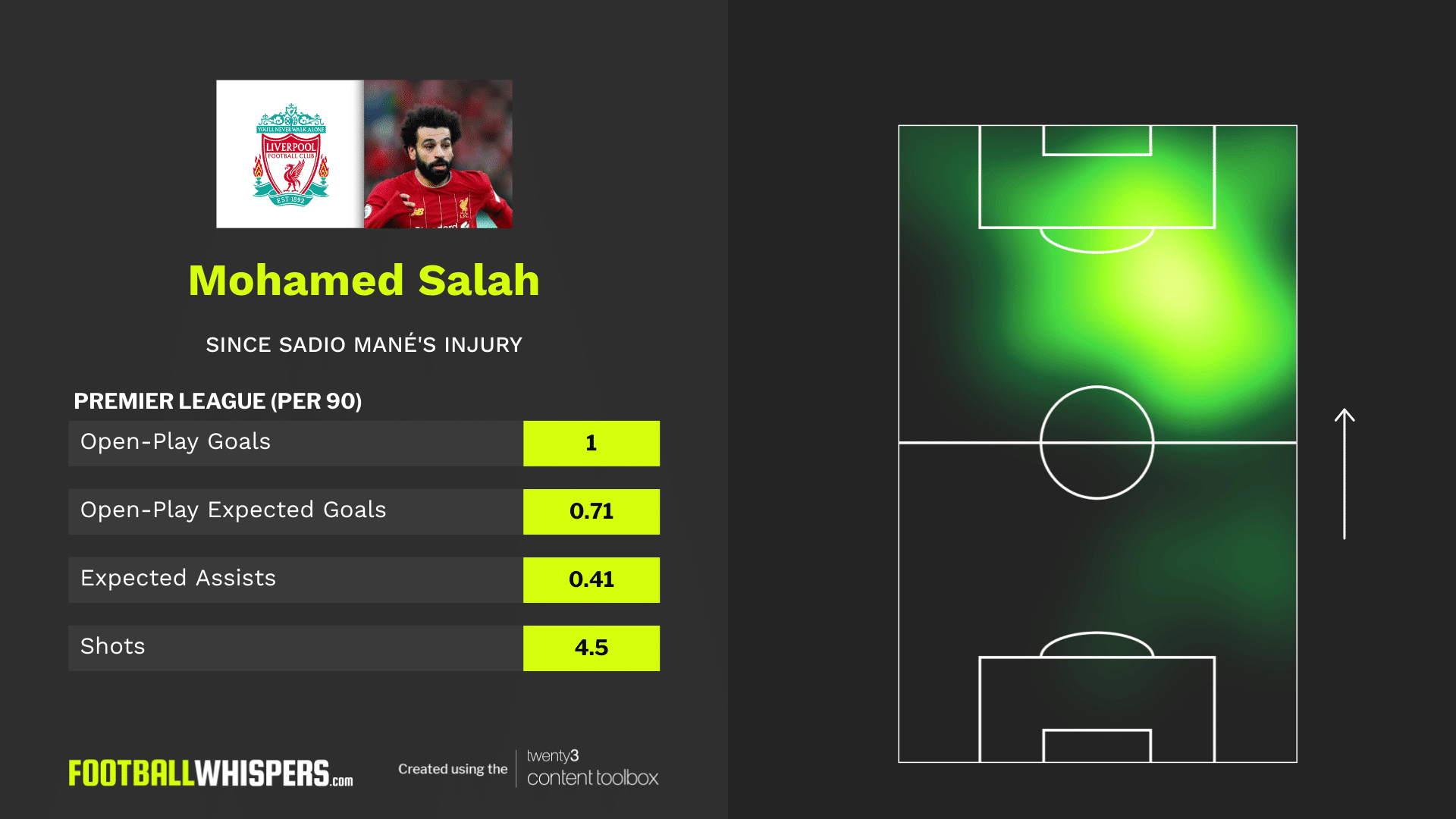 It was a similar story against Southampton. Salah finished the match with two goals to his name to take his total for the season to 14. He's now just three behind Jamie Vardy in the race for the Golden Boot. He failed to add an assist but supplied three key passes as the leaders romped to a 4-0 win at Anfield.

In his last two matches, the curly-haired assassin has scored three goals, assisted once and played five key passes. Granted, the sample size isn't the largest, but Salah's underlying numbers have shot up in Mané's absence.

His season average prior to the West Ham game was 0.77 expected goal involvements per 90. His average for the last two matches is 1.12. But it isn't just in the goals department that Salah has improved. 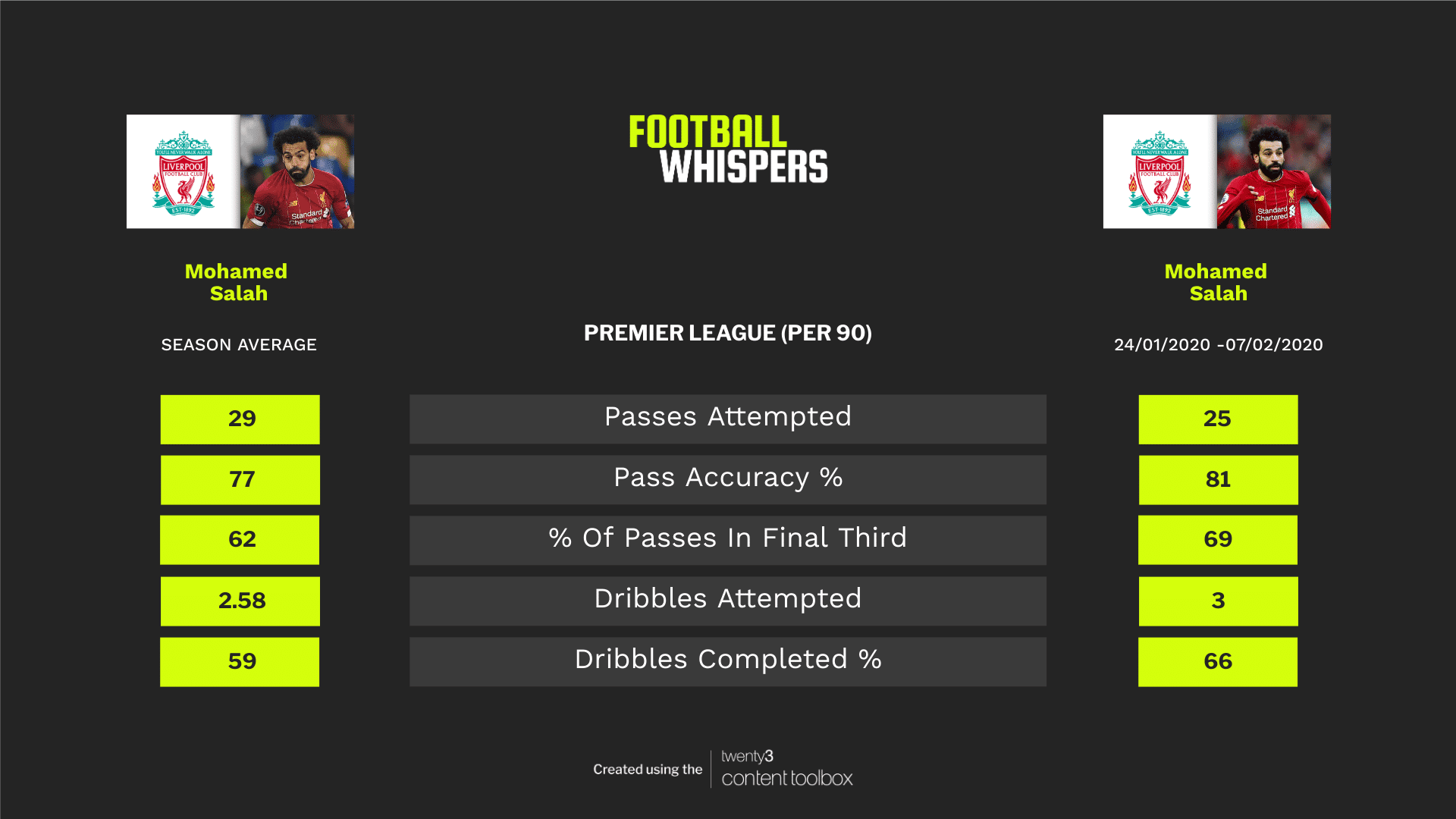 He's averaging slightly fewer passes (per 90) but more in the final third. His pass accuracy is up, too, as is the percentage of passes he plays forward. The Liverpool No.11 is proving why less sometimes is more. He's averaging a similar number of passes (46) but he's much more incisive and progressive when in possession.

Salah is also attempting more dribbles and completing a higher percentage. He's become the Reds' creative hub. He's scoring more, creating more and is more efficient in everything he does. So much so, Mané hasn't been missed in the slightest. That is quite something given the Senegalese speedster was arguably Liverpool's player of the season before injury.

When the Reds needed him most, Salah stepped up to the plate and delivered. Again. In this sort of form, you wouldn't bet against him claiming a third consecutive Golden Boot.