Nice hosts Saint-Etienne in the 36th round of French Ligue 1 games. The hosts are sixth on the table and tie at 60 points with 5th placed Strasbourg. Will Nice break into top five after this game? Read our match analysis for more details. We also have the best free tips and the best odds for the Ligue 1 game across selected sportsbooks.

Nice vs Saint-Etienne Free Predictions and Tips by Football Whispers

Ligue 1 predictions by Football Whispers are premised on extensive data/information collection and analysis. So, after an in-depth analysis of this match, we have settled on the best two predictions for the game as follows:

A narrow loss in the Coupe de France finals was Nice’s closet shave to silverware this season. However, top five ambitions remains at stake. On the flipside, St. Etienne is facing a relegation threat, so the visitors should play for more survival points. With that, this should be a tough match right from the first whistle. We expect a cautious and tense first half with no breakthrough.

The nature of this game makes it one of the toughest in mid-week Ligue 1 fixtures. However, Etienne’s poor scoring run could cost them on matchday even though we expect mostly a defensive approach from both ends.

Check the tables below for the latest team form, H2H stats for Nice vs Saint-Etienne and more stats.

Nice and Saint-Etienne are among the few teams in Ligue team that are yet to play their 36th game of the season, so a lot of excitement is building up ahead of this duel. Both sides have something to fight for in this game, which also explains why fans of both are in high spirits and apprehensive at the same time.

While Nice have a chance of breaking in top five given that they have 60 pts like Strasbourg in fifth place, this duel pits Nice against a relegation threatened Saint-Etienne. The visitors sit 18th, three points ahead of 19th ranked Metz. It is a tight race for survival and European places. With that, this game will be difficult from the onset as both team look to avoid conceding at early goal. So, backing just a few goals to be scored in this game would make for another good best and for a good price with our handpicked bookmakers.

Nice were unlucky in the France Cup finals despite dominating both halves of the game. They lost by a lone goal scored by Nantes two minutes into the second half. That should have dampened the spirits of the hosts but with top five at stake, we expect the hosts to dust themselves up and take advantage of Nante’s poor run of form in this Ligue 1 encounter.

FAQS about Ligue 1 Match Between Nice and Saint-Etienne 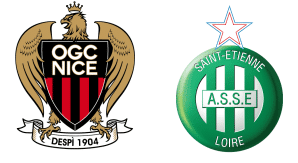 Where is the venue for Nice vs Saint-Etienne?

The game will be at the Allianz Riviera, home ground to Nice

What time will Nice vs Saint-Etienne kick off?

Which team won the reverse leg?