Bordeaux defeated Saint-Etienne 2-1 in the reverse game. Will they get a second win now that home advantage should play significance in this second meeting of the current season? Find out what we expect in this duel, including our best free picks, odds and tips for the Ligue 1 match.

This Ligue 1 duel between Bordeaux and Saint-Etienne is a do or die for both teams. While the hosts need points to escape the red zone, Etienne need points to stay above it. Who will emerge victorious in this midweek game? Find out from our free tips and predictions with the best odds across selected bookmakers below.

Both sides have defensive challenges, which have largely contributed to their off form in the current season. While Bordeaux should bank on home support to edge out Saint-Etienne in this game, the hosts defeated Etienne only once in the last seven meetings, drawing once and losing the other five duels. All the last five meetings between these teams had goals on both sides.

The last five games have revealed a shaky trend on both ends and there is no denying that these teams haven’t done well recently. For example, Bordeaux lost 6-1 to Lyon last weekend, a scoreline that revealed poor defending. In the four losses from the last six games, Bordeaux leaked at least two goals in those losses. On the other hand, Etienne lost 4-2 to Marseille and 6-2 to Lorient before a 2-1 win over Brest last weekend. Poor defending on both ends is the reason we feel this will be a high scoring duel.

Find out which bookmakers have the best odds for the Ligue 1 game as well more stats in the tables below.

Bordeaux is currently 19th on Ligue 1 table while Sain-Etienne is 17th. The two teams are separated by four points ahead of this game. It is, therefore, safe to conclude this will be a battle for survival as both Ligue 1 outfits fight to avoid relegation.

Six games are remaining before the current Ligue 1 season runs out, so we expect a hard-fought duel between two teams looking to survive the cut.

In short, this will be a duel pitting two equal opponents against each other, so let’s see the predicted lineups for this game. 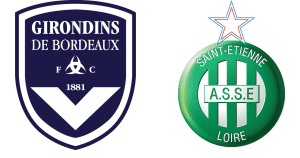 Where is the venue for the Ligue 1 game between Bordeaux and Saint-Etienne?

Matmut Atlantique is the venue for the game.

What time will the game begin?

When is Bordeaux hosting Saint-Etienne for this game?