Watford fans might not believe it but, at one point, Étienne Capoue was thought of as one of the brightest young midfielders coming out of France.

At Toulouse the Niort native was courted by some of Europe's biggest clubs. He was a Tottenham and Arsenal transfer target before moving to White Hart Lane for £9.3million in the summer of 2013.

Expectations were high but the combination of a lengthy injury lay-off and fierce competition for places following the post-Gareth Bale splurge limited the midfielder to just 19 Premier League starts in two seasons.

In July 2015 Capoue cut his losses and moved to newly-promoted Watford for a club-record £6.3million – quite the step back for a player with seven caps for France, the last of which came in a friendly defeat to Uruguay two years prior.

Initially he sparkled at Vicarage Road under Quique Sánchez Flores. His talent evident and in a functional Hornets side, Capoue provided the occasional sprinkling of class with deft touches and smooth passing.

His performance away to Manchester United in March 2016, on the left of a narrow midfield four, was the undoubted highlight. But it was the exception, rather than the rule.

When Marco Silva was appointed last summer Capoue appeared to be out of favour. Left out initially, he forced his way into contention with goals against Bournemouth and Bristol City in his first two outings of the season.

But he was never a regular under the Portuguese who handed him just two outings between September and mid-December. His languid style and refusal to hare around pressing the opposition meant he was never a natural fit in Silva's side.

However, with Silva sacked and Javi Gracia in place, Capoue's role and status have changed. He has gone from bit-part player to a starter. That is largely down to the spate of injuries which have decimated Watford's midfield. But Capoue has made good on his opportunity, shining in the recent 4-1 win over Chelsea.

The question now is whether this is the start of a new chapter in his underwhelming Hornets career or just another flicker of light which will die out sooner rather than later.

We've taken a look at the stats to see if there is anything in his sudden resurgence. 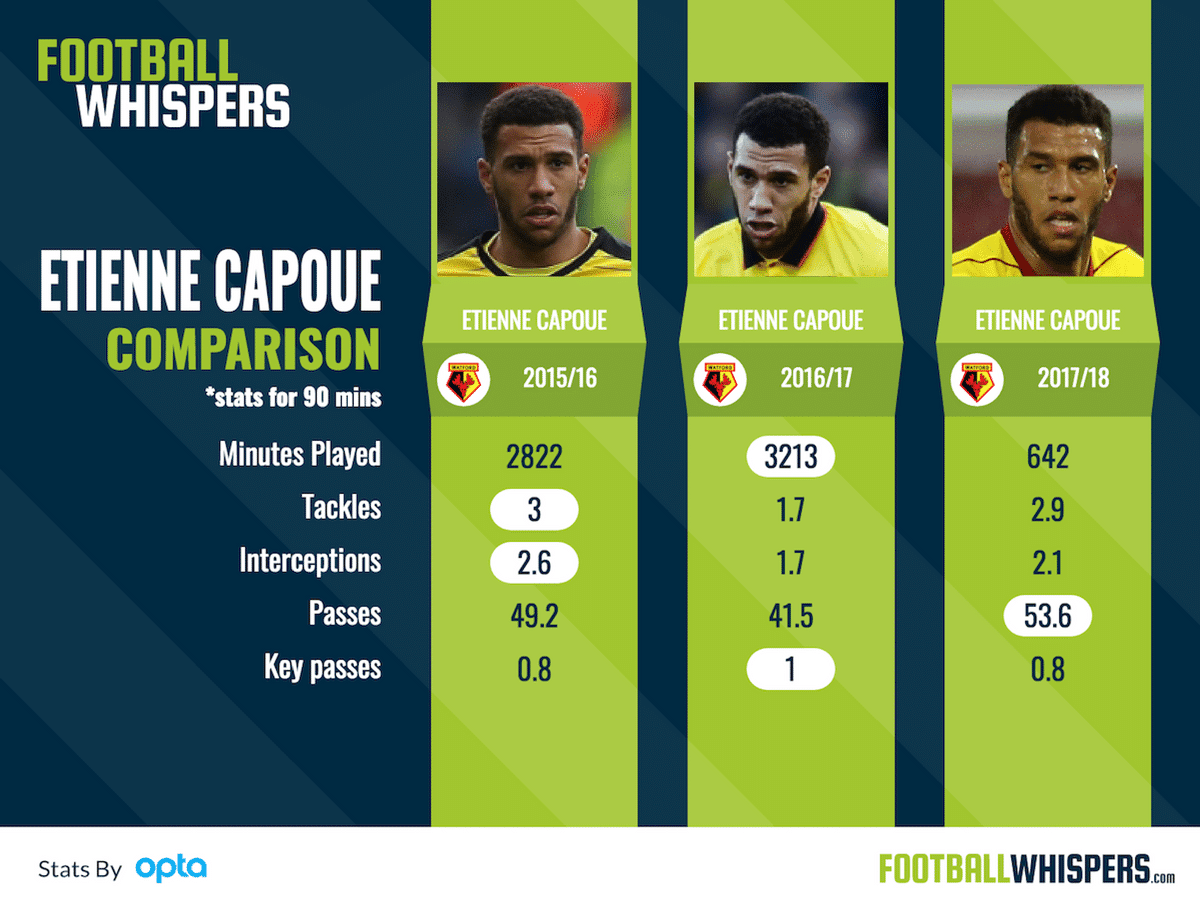 Although the 2015/16 campaign was statistically Capoue's best for Watford, it is interesting to note he has made more passes per 90 this season than any other and is only just off his peak for tackles, interceptions and key passes per 90 – well above last season's low point.

The improvement in the defensive aspect of his performances has been stark since Gracia replaced Silva. Positioned deeper than under Walter Mazzari or Sánchez Flores, Capoue has flourished.

“I enjoy it because it was my position at Tottenham and Toulouse so I am enjoying it a lot,” Capoue told the Hertfordshire Mercury.

“I played eight years as a professional in this role, so I enjoy it of course. If I do not attack, it is OK and it is good to defend as well. It is cool.”

In the win over Chelsea no player from either side attempted (10) or won (6) more tackles than Capoue. The rangy Frenchman was only second to Blues star N'Golo Kanté for interceptions (3), also a team-high for Watford.

It was not a one-off either. In Gracia's first Premier League match, at Stoke City, no-one attempted (4) or won (3) more tackles than Capoue who also led the way for interceptions (3) for the Hornets in a goalless draw.

Even in last weekend's 2-0 loss at West Ham United he won three of the six tackles he attempted, enough to make him the visitors' second-most prolific retriever of the ball after Darryl Janmaat.

This is not the first time he has threatened something, though. It's time to make good on that long-standing promise.