Sadio Mané, at his very best, is unstoppable. Bayern Munich found that out on Wednesday night, crashing out of the Champions League to a brace from Liverpool’s Senegalese forward.

It is now ten goals in ten in all competitions for Mané, who took his tally for the season to 19 at the Allianz Arena. He is now just one behind Mohamed Salah and one off his total of 20 goals last season, his best return in a Liverpool shirt.

It is no exaggeration to say, then, that Mané is quickly becoming Liverpool’s most important attacking player. Salah, though he remains an integral part of the Reds’ fluid front three, has endured a goal drought – the Egyptian has just three goals in his last ten – and Mané has stepped up at a crucial time. It means that Liverpool are no longer over-reliant on one player to find the net.

Mané provides something different in the final third for Liverpool: sheer pace, direct running and an inherent skilfulness. It is difficult to imagine any other player in Jürgen Klopp’s team pulling off the first touch, audacious turn and delicate finish that left Manuel Neuer so disoriented and gave Liverpool the lead on Wednesday evening.

“It’s so obvious that I don’t have to speak about it,” Klopp said of Mané’s form in the aftermath of the Bayern win. “He knows it, everybody knows it. I don’t want to speak about it really. Remind me after the season and I will sing my own song about Sadio Mané if you like. He’s a really good footballer and long may it continue.”

By now, as Klopp is clearly keen to emphasise, Mané’s brilliance is hardly surprising. He was prolific in the Champions League last season, scoring ten goals – including the equaliser in the final against Real Madrid – as Liverpool came close to lifting the trophy. And the signs suggest he could have a similar impact in the latter stages of this season’s competition.

Mané, crucially, tends to do his best work on the biggest stage. But his consistency since the turn of the year has been remarkable even by his own high standards. He is hitting new heights, playing with a maturity and confidence that might have been lacking in the past.

Fans have often bemoaned Mané’s ability to frustrate and delight in equal measure. He has been guilty in previous seasons – even earlier on this campaign – of making rash decisions, playing the wrong pass.

In 2019, though, Mané appears to have gone up a gear. A Liverpool team that is more mature, less erratic and more composed, has been reflected in the performances of the 26-year-old, who seems to have refined his game. The instinctiveness, the extravagance is still there, but there has been a noticeable and dramatic upturn in efficacy.

In the Premier League, since the turn of the year, Mané’s goal scoring rate has increased from 0.48 per 90 to 0.83. His shooting accuracy has improved, too: from 47.6 per cent to 52 per cent. His xG per 90, meanwhile, has increased only slightly, from 0.41 to 0.43, which suggests he is scoring more than should be expected.

This does not feel like it is simply a rich vein of form, though. Mané has – with the occasional exception – kept up a high level of performance for the last three months and is beginning to play with the efficiency that could make him one of Europe’s most proficient attacking players. 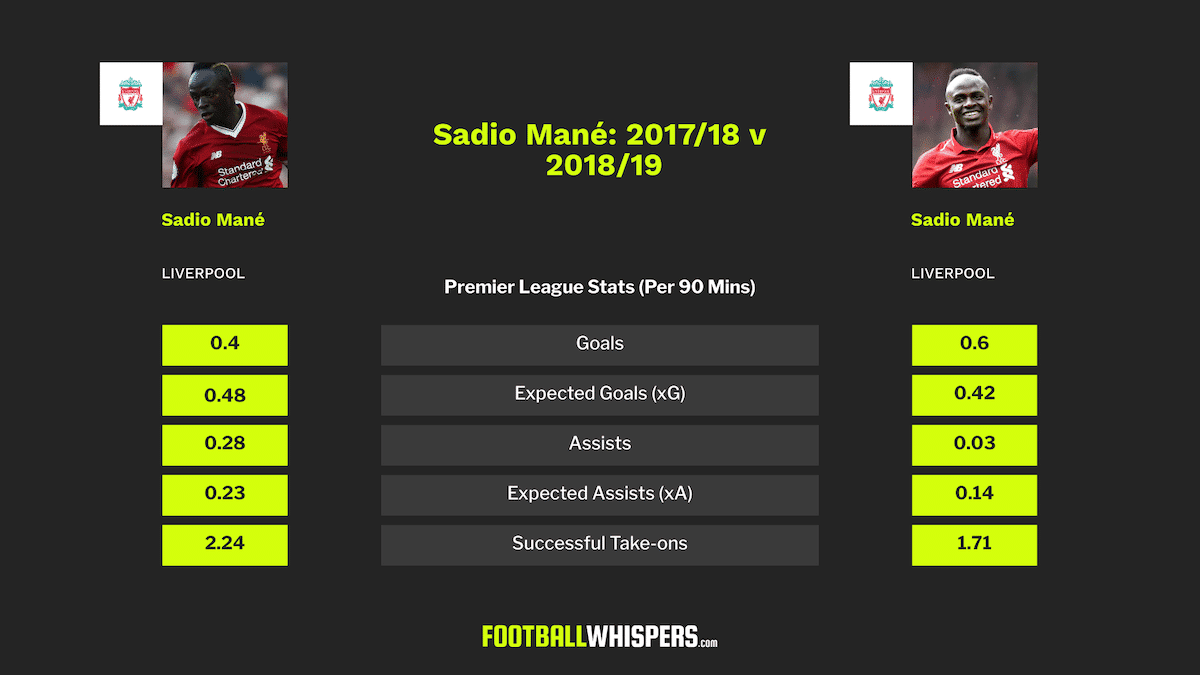 At the moment, he looks sharper than Salah, more of a threat for opposition defenders. And it would not be a surprise to Mané surpass his teammate in the goalscoring charts over the coming weeks.

“Sadio is coming to an age where things are becoming more natural for him,” Klopp said earlier this month. “He’s not having to convince people now. We all know that he’s a world-class player, and he has started realising that for himself.

“Mix it up with his attitude and his work rate, it can be a really decent career – even better than it was to now. He’s in a good moment of his career, and he’s in the best age group now.”

The missing pieces are starting to fall into place for Mané. The rest of Europe, and the Premier League, should be worried.