Journey back to August and the sense of optimism and excitement around Craven Cottage was palpable.

Fulham, back in the Premier League after a four-year absence, approached the new season with much loftier ambitions than merely retaining their top-flight status.

Buoyed by an impressive showing in the transfer market, spending close to £100million on the likes of Jean Michaël Seri, André-Frank Zambo Anguissa, Aleksandar Mitrović, Alfie Mawson and Joe Bryan in addition to completing a series of impressive loan deals including André Schürrle, Luciano Vietto, Sergio Rico and Calum Chambers, they looked in pretty good nick.

The hope was that, under the tutelage of Slaviša Jokanović, the new arrivals would gel seamlessly with the existing squad and challenge, maybe, for a place in the top half of the table.

Six months later, the optimism has been replaced by angst and disaffection. Jokanović is gone and the club, now under Claudio Ranieri, are fighting for their lives, seven points adrift of safety of safety at the time of writing.

Not only have several of the new faces struggled to make an impression, but a clutch of the club's star performers also have failed to emulate the form that lifted Fulham to promotion via the play-offs in May.

Captain Tom Cairney, outstanding in the Championship last season, has found life difficult in the Premier League, largely due to injuries, while the woes of Tim Ream – Fulham's reigning Player of the Year – have been laid bare in the last two games, substituted after 27 and 45 minutes against Brighton and Crystal Palace respectively.

Then there is Ryan Sessegnon, whose scintillating form throughout the 2017/18 campaign led to calls for Gareth Southgate to include him in England's World Cup squad.

Despite winning the Championship Player of the Year after 15 goals and six assists, the 18-year-old did not make the cut for Russia.

Eight months on and Sessegnon is still to make his England debut, a fact made all the more frustrating for him when he looks at those of a similar age – Trent Alexander-Arnold, Ben Chilwell and Jadon Sancho – who have broken onto the international scene since the end of last season.

Sessegnon's main concern for now, however, must be breathing new life into his club career, for the hype train surrounding the teenager has well and truly stalled.

This time last year, Sessegnon was graciously swerving questions about reported interest from Tottenham Hotspur. Now, though, his ambitions have been scaled back; his main focus is re-establishing himself at Craven Cottage.

Of course, there have been moments where the winger has produced flashes of quality, moments that have, like last season, changed games and won points.

In November, Sessegnon provided two assists to help Fulham beat Southampton 3-2 at the Cottage in Ranieri's first game in charge.

His first, for Schürrle, came after blitzing Cédric Soares and skimming a sensational cross into the German's path at the far post. The second was much different, showing fine composure to flick his header into Mitrović's path for the winner.

However, after struggling in the 4-1 defeat to Manchester United at Old Trafford, Sessegnon made his impact in the next two games from the bench, netting the opener in a draw against Wolverhampton Wanderers before teeing up another Mitrović winner three days later, this time against Huddersfield Town.

Unfortunately, these impactful cameos have not been enough to nail down his spot under Ranieri. Some tipped the youngster to be the Italian's super-sub during the run-in but, with Fulham chasing the game away to Burnley recently, Sessegnon started and was then sacrificed at half-time and has since been usurped on the left wing by January recruit Ryan Babel.

The Dutchman, back in the Premier League eight years after leaving Liverpool, has impressed for the Cottagers so far and, while some may look at the 32-year-old's arrival on loan as a potential hindrance to Sessegnon's progress, it may prove beneficial in the long-term.

Babel's presence in the line-up provides genuine competition for Sessegnon, who has enjoyed being one of the first names on the teamsheet for the last two years.

Bringing in Babel, a player of considerably more experience, may be an effective motivational tool for a clearly gifted player still searching for consistency in his debut season in the Premier League. 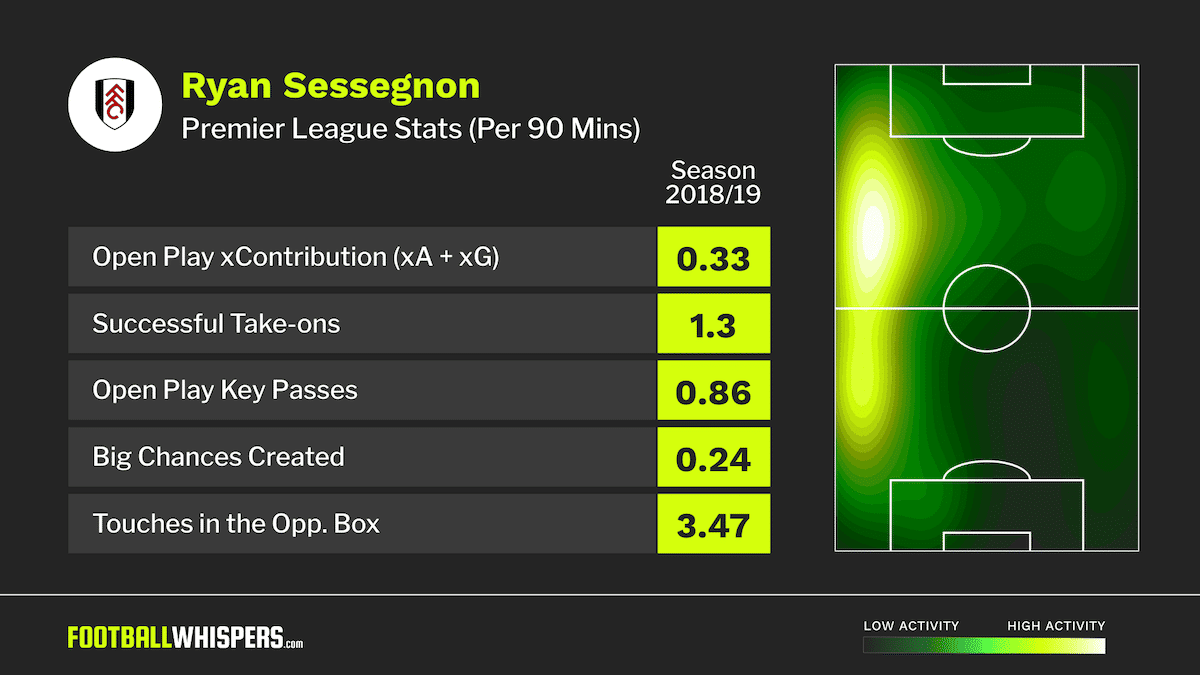 The next few months may be crucial in Sessegnon's career. The immediate challenge is reclaiming his spot on the left wing. Do that and he can be a key figure in Fulham's fight to stave off relegation.

If that scenario fails to materialise, it's unlikely that he will readily drop back down the second tier. But even though interest in him in the past has been strong, there is no guarantee of a move to a bigger club. And, even if there was, competition for places is just as fierce at clubs like Tottenham and Manchester United, and stalling on a contract extension in the hope of sealing a move elsewhere would inevitably fray his relationship with Fulham fans.

Sessegnon has reached an interesting juncture. He won't celebrate his 19th birthday for another three months and, while he remains a player of extraordinary promise, how he responds to the challenge of Babel and Fulham's possible change in status will tell us a great deal about him.

He has already proven his talent and, by many accounts, is an old head on young shoulders. Now it's the time to show that and reaffirm his importance to Fulham.