The 2018/19 season was supposed to be the campaign in which Fulham star Ryan Sessegnon established himself as one of the brightest young talents in world football.

The 18-year-old was the driving force behind the Cottagers' promotion to the Premier League; he scored 15 goals and claimed a further six assists to help the club win the Championship play-offs under Slaviša Jokanović.

Offers were made last summer yet Sessegnon stayed loyal to Fulham. The stage was set for him to thrive in the top flight. But things quickly unraveled for club and player alike.

By November Jokanović had been sacked with Fulham in the relegation zone. Sessegnon, meanwhile, struggled to impact games and then lost his place in the side under Claudio Ranieri, Jokanović's successor.

The teenager was restored to the starting XI by Scott Parker, Fulham's third manager of the season. And there have been signs the England Under-21 international is getting to grips with Premier League football.

That upturn in form is encouraging, especially ahead of the summer. With just a year remaining on his contract, Sessegnon is expected to leave Fulham for pastures new. There are no shortage of clubs interested in him, either.

Juventus have been linked. Manchester United, too. His boyhood side, Liverpool, have also been touted as a potential suitor. The versatile wide player, however, wants a move elsewhere: Tottenham Hotspur.

According to reports, Sessegnon favours a switch to north London in order to work under Mauricio Pochettino, who has enhanced the careers of several young English players, including Harry Kane, Dele Alli and Harry Winks.

A potential fee of £35million is not one that would scare off Spurs, who haven't spent a penny on new players in either of the last two transfer windows, and Pochettino has spoken publicly about the need to enhance his squad this summer.

“Everyone says we have an amazing house but we need to put in the furniture,” the Spurs boss said on Friday. “We need to be respectful with teams like Manchester City or Liverpool who spend a lot of money.

“We are brave, we are clever, we are creative. Now it’s about creating another chapter and to have the clear idea of how we are going to build that new project. We need to rebuild. It’s going to be painful.”

Sessegnon can be the first piece of that rebuild. The big question would be where he fits into the Tottenham side. The youngster started his career at Fulham at left-back but was shifted forward because of his goal threat.

He has sporadically returned to a defensive role this term but has proven more effective further up the pitch – no 18-year-old in European football's big-five leagues have played more open play key passes than Sessegnon this term. 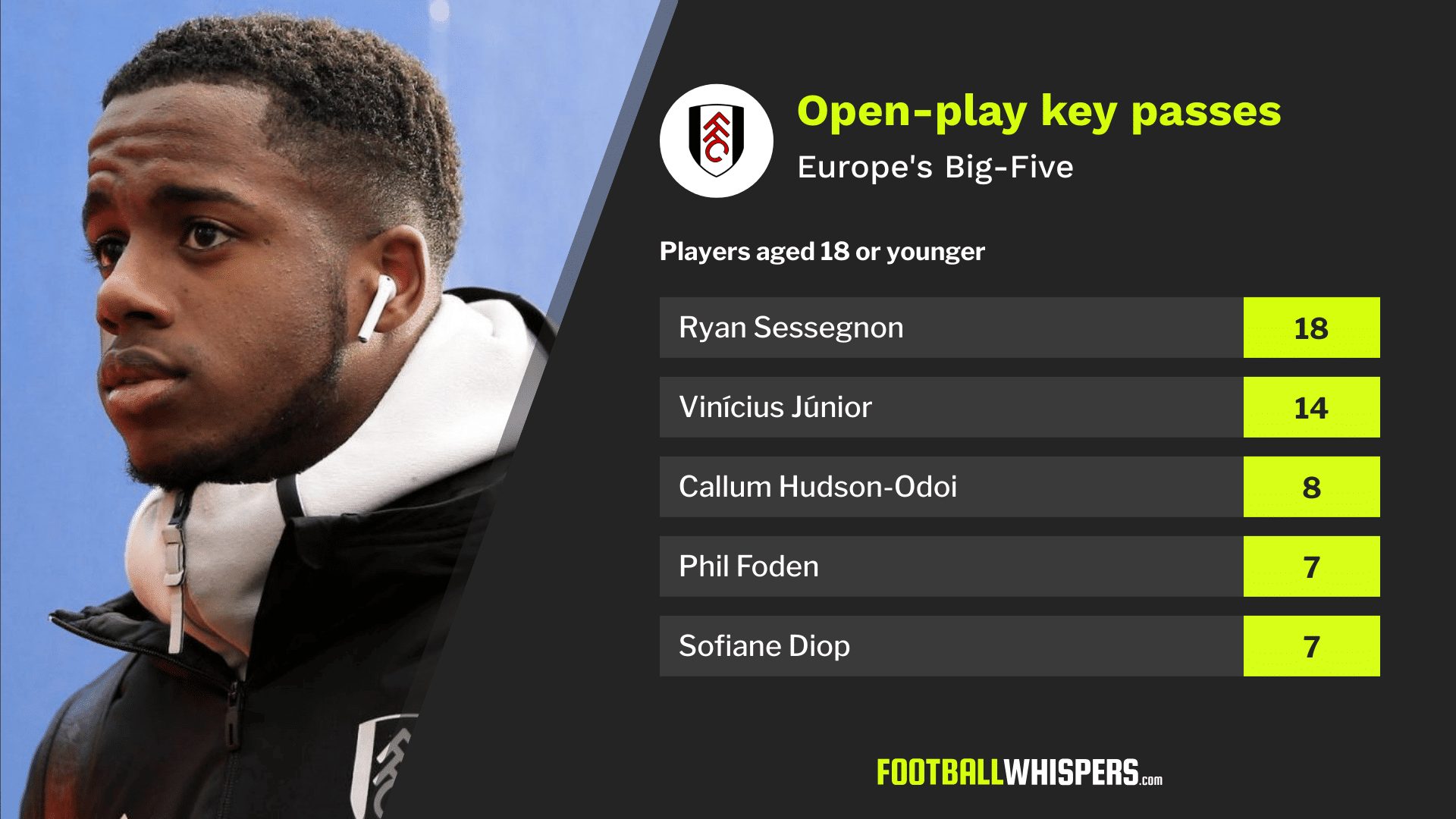 At Tottenham, Sessegnon would be competing for a starting berth alongside Alli, Son Heung-min, Lucas Moura, Erik Lamela and, if he doesn't depart for Real Madrid, Christian Eriksen.

Regular first-team football would be far from a guarantee. And when given an opportunity, he would need to take it. There are signs, however, Sessegnon can thrive in a side with greater quality.

He has claimed six Premier League assists at a rate of 0.25 per 90 – the seventh highest figure among top-flight midfielders to have played over 1000 minutes this term. From a Spurs perspective, only Eriksen (0.41) can better that output.

There is, of course, the potential for Pochettino to mould Sessegnon into Tottenham's future left-back. Danny Rose turns 29 years old this summer while Ben Davies, still only 26, has never truly convinced against the best sides in Europe and the Premier League.

In a side such as Spurs, who tend to control games, Sessegnon could evolve into a fine attacking full-back. His delivery from wide areas coupled with his ability to break into the penalty box with the ball would complement the creativity of Alli, who is regularly deployed on the left of the attack.

“At younger ages I was more attacking and had a striker role through the middle, but as I progressed they pushed me towards left-back,” he told in 2018.

“I think they saw the energy and endurance that I have to get up and down the pitch and they just tried to change my game, more for my physical attributes than how I see the game.

“If you can play a variety of positions quite well it gives the manager the option to play you in that position, for one. And I don’t think at a young age you know your position well enough so to have one or two is good.”

A move this summer is likely to be a pivotal moment in Sessegnon's young career. He will need to make the right decision as to where his future lies, both on and off the pitch.