Ever since he made the move from left-back to left winger, the world has been on the lookout for the next player capable of making the switch. A talent wasted as a full-back. A talent who if unleashed further forward could do a lot of damage.

There have been a number of false dawns and lazy comparisons aplenty. But Ryan Sessegnon could be the one.

Granted, while his debut campaign in the Premier League wasn't anything to shout about, the soon to be 19-year-old showed glimpses of his potential in a struggling Fulham side. Enough to convince a number of the top six, according to recent reports, that he could be worth the best part of £40million.

Manchester United were keen on the England Under-21 international, as were  Liverpool. But the young full-back is set to complete a move to Tottenham Hotspur on transfer deadline day.

The Champions League finalists are perhaps the perfect club for Sessegnon to hone his craft.

There are no guarantees if he moves to Old Trafford. He won't be playing in the Champions League. He'd be up against the reborn Luke Shaw for a left-back role and at times United don't even operate with a left winger given they use a diamond formation. It limits his opportunities.

Liverpool are an interesting option but he's unlikely to usurp Andrew Robertson anytime soon while a starring role in attack isn't something he can expect anytime soon.

But with Spurs, the youngster has options. Mauricio Pochettino isn't married to a certain system. At times he's used a back five, he's used a diamond in midfield and he's used a normal 4-3-3 shape.

Sessegnon could play as a wing-back. He could play on the left of an attacking three or on the right. Érik Lamela is the only naturally left-footed player in attack. The Argentine is not the most reliable in terms of fitness meaning, at times, the Spurs attack isn't truly balanced, and it lacks an option, even off the bench, to correct that.

Sessegnon's flexibility is an asset for a team like Tottenham. And under a manager like Pochettino, he could truly fulfil the abundance of potential he has. 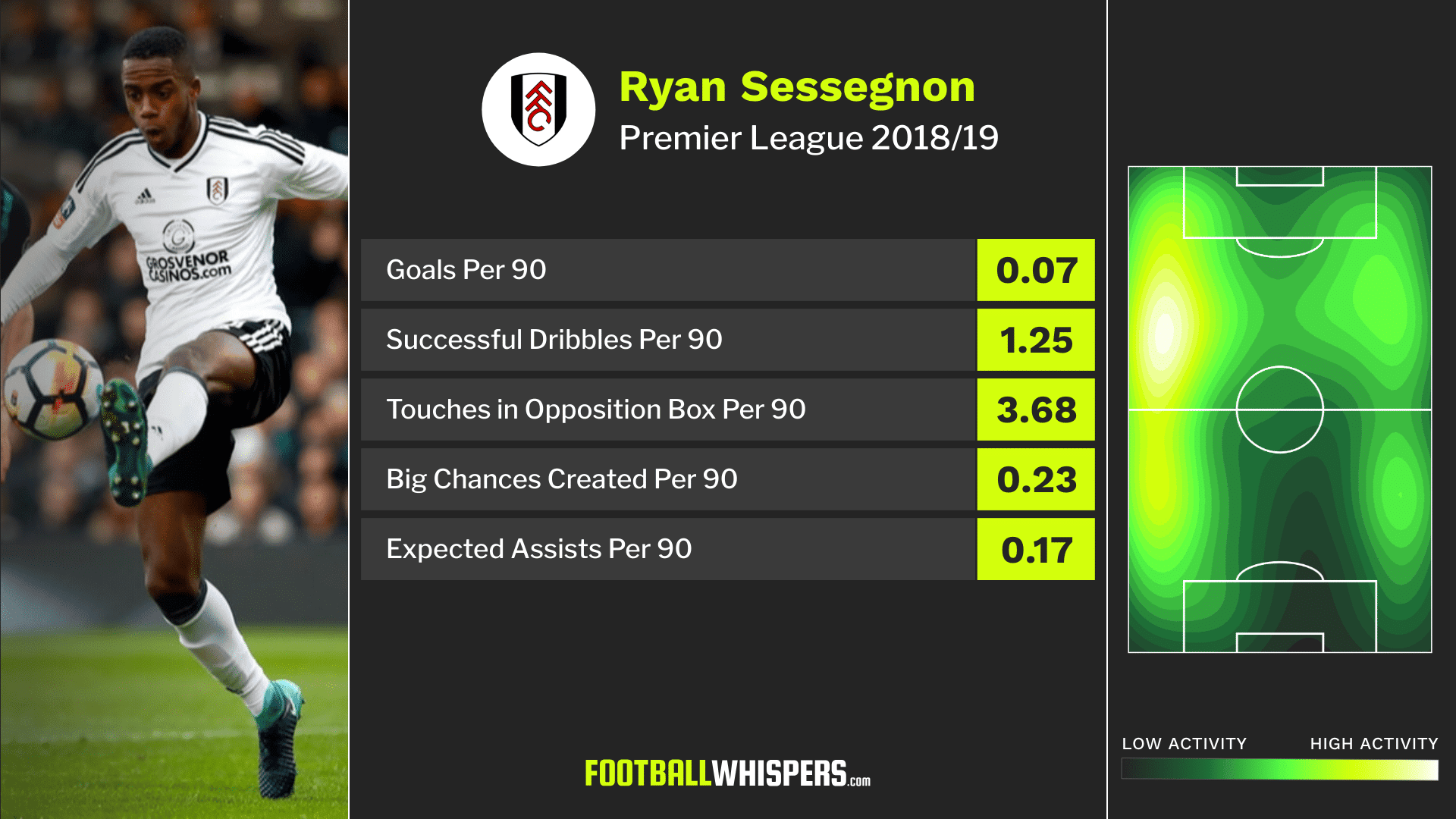 His heatmap, shown in the graphic above, suggest he's a player comfortable in the final third as much as he is in the defensive third. His 0.07 goals per 90 isn't anything to shout about but we'll get to that later.

The fact he's averaging 1.25 dribbles shows he can beat a man, an invaluable trait in the Premier League with so many teams now looking to sit behind the ball and make like difficult. Furthermore, in a team that gets him the ball with greater regularity, this stat is likely to improve. For context, Sessegnon averaged 42 touches last season compared to Heung-min Son's 56.

On the surface of it, Sessegnon's touches in the area may seem low but Son only averaged 5.07 per 90 in the Premier League and this was while playing in one of the best teams in the league. It's another stat that will likely improve if he did make the move.

What is encouraging to see is that Sessegnon managed to create the same amount of big chances as Son while averaging a higher expected assists per 90 total. 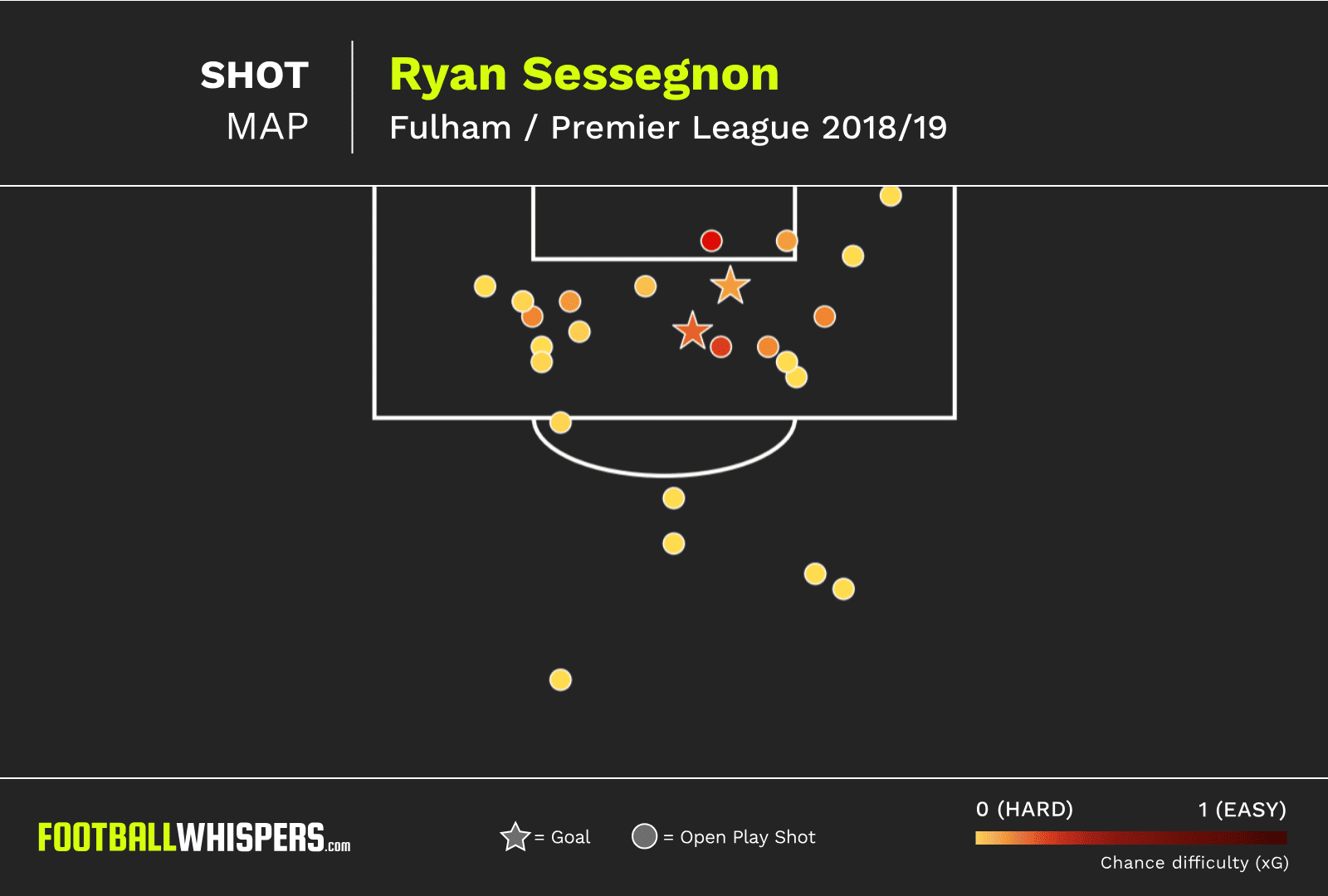 The above graphic shows Sessegnon's shot map for his season in the Premier League. He didn't take many shots, granted, but all but five came inside the area. It highlights that he's good at getting into dangerous areas and that he's frugal with his shot selection. For an 18-year-old to have this side to their game is remarkable.

While he may have struggled for goals in his debut campaign in the English top flight, he won't have trouble throughout his career if he continues to get into these areas.

Sessegnon is an adept dribbler who can also pick a pass. He's got the pace and the intelligence to cause all sorts of problems, in a similar manner to Bale.

However, unlike other players of that ilk, he also has an eye for goal. He's already a well-rounded winger with the instincts of a goalscorer. If developed properly, he could be as good as the best wide forwards in the world today.