Ryan Fraser has enjoyed quite the transformation during his time at Bournemouth.

When he arrived from Aberdeen in January 2013 he was unfit and overweight. “I used to have Domino's all the time and ice creams from Baskin Robbins,” the Scot admitted in an interview in 2017.

Eddie Howe quickly put a stop to Fraser's penchant for takeaways. And over the following six seasons, one of which was spent on loan at Ipswich Town, the winger has blossomed into one of the most dangerous in the Premier League.

This term he has struck seven times for the Cherries and claimed eleven assists in all competitions. Ten of those have come in the top flight, a figure only Eden Hazard and Christian Eriksen can better.

Such form hasn't gone unnoticed and, according to The Mirror, Arsenal are planning a summer move for Fraser, who will only have one year remaining on his contract.

“It's very nice and means you are doing something right,” the Scotland international admitted in an interview with Sky Sports.

“They are a huge club, a massive club. When you see your name thrown around [in the media] you always try to think ‘you are a Bournemouth player, just try to do well'. But I'm not going to lie, you do feel good, especially when it's a massive club.”

Interest in Fraser isn't new; Tottenham Hotspur scouted the 25-year-old earlier in the campaign. Yet the jump from midtable Premier League side to Champions League hopeful is sizable. The demands are greater, the scrutiny more intense.

But with just over 12 months remaining on his contract, Bournemouth have a decision to make with Fraser. They either cash in this summer, for a reduced fee, or risk losing him in the summer of 2020 for nothing.

However, is the winger ready to make the jump to a top-six side? We've taken a deeper look into his numbers to find out.

At 5ft 4ins, Fraser is the smallest player in the Premier League. But there is no prototype footballer; just look at the difference in stature and physique between Lionel Messi and Cristiano Ronaldo, two of the greatest players of all time.

The most important thing is talent and then how talent is applied. And Fraser is an excellent example of that natural talent and hard work paying off. He swapped takeaways for home cooked meals and worked hard on his fitness during his summer breaks.

He is now an exciting and effective Premier League footballer. One that is a genuine threat for the Cherries.

This term he has created 0.71 big chances in the top flight, the second highest total among midfielders. Yet these aren't delicate through balls, predominantly they are dangerous passes from wide areas, as his shot assist map below highlights. 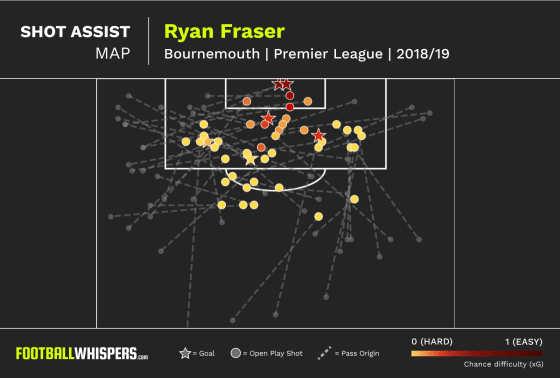 In this sense, Fraser is a throwback winger. He likes to scurry beyond his marker in wide areas and deliver. It's why he's eighth among Premier League midfielders for accurate crosses per 90 (1.93) and fourth for accurate pull backs per 90 (0.13).

Fraser is ideal for Bournemouth's 4-4-2; he always has at least two players to find in the opposition area. Yet none of the top-six coaches utilise a two-striker system on a consistent basis.

At Arsenal this season, Unai Emery has used 3-4-2-1 and 4-2-3-1 formations, he has also toyed with a winger-less 4-3-1-2, with both Pierre Emerick-Aubameyang and Alexandre Lacazette used as a front two.

The Gunners' current wide options are Henrikh Mkhitaryan and Alex Iwobi, both of whom prefer to drift infield. The former offers a greater goal threat – 0.46 per 90 to Fraser's 0.2 – while the latter's expected goals assisted (0.28) is marginally better than the Bournemouth man (0.24). 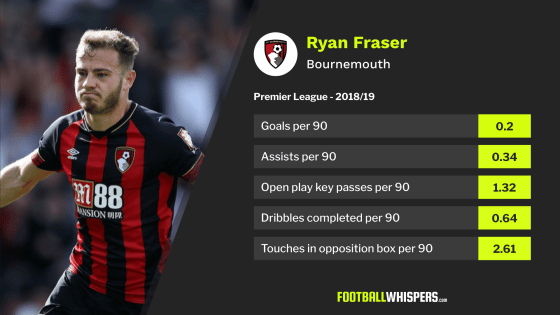 Of course, both play in a better side, one which tends to have more of the ball and fashions more chances. So their output should be higher than Fraser's.

The fact he is close to the pair, however, highlights his effectiveness. And were he to move to the Emirates he would offer Emery a very different threat to what he currently possesses.

Of course, it will all come down to the fee required to prise him away from south coast club. Multiple reports claim Arsenal will not have a huge transfer budget this summer. Instead, they will need to find value in the market. Fraser offers just that.

Bournemouth wouldn't be able to command a huge fee given his contract situation and, at 25 years old, the best years of Fraser's career should be still to come.

Arsenal can offer him a platform the Cherries can't. An opportunity to challenge at the top end of the Premier League and in Europe. It's time for the diminutive winger to take a big step.