Sadio Mané continues to evolve as a player. The Liverpool No.10 started life at Anfield playing on the right of a three-man attack.

The arrival of Mohamed Salah saw him move onto the left and then the departure of Philippe Coutinho resulted in the former Southampton star adopting more of a creative role for Jürgen Klopp’s side.

Many expected him to take up the same role this season after the Reds failed to bring in a Philippe Coutinho replacement. Nabil Fekir was close to signing but a medical issue halted that transfer and Liverpool, for reasons unknown, didn't make a move for anybody else.

However, that isn't what has happened. With the switch to the 4-2-3-1 shape, the Reds have turned Roberto Firmino back into an attacking midfielder and, in some ways, tasking him with being the creative force.

The switch has divided opinion.

On one hand, Firmino seems to be the only player Klopp trusts in that role ahead of a two-man midfield. If one player is suffering for the good of the team, with the Reds not losing a match when using the 4-2-3-1 shape, then it's a sacrifice that sometimes has to be made.

On the other hand, Klopp's changed the dynamic of what was once one of the most feared trios in European football. While Salah, Firmino and Mané are all still scoring, and Liverpool are still winning, there's very little fluidity in the forward line this season because of the different style being used. And it's noticeable.

Yes, Firmino's goal and assist return is down (0.54 per 90 minutes compared to 0.70 last season), but the stats don't tell the whole story. He has five goals in his last six starts and this flurry of goals has bolstered his stats on a per-90-minute basis. From August to the start of December he managed just three goals.

Similarly, Mané went through a barren patch. After Liverpool's 2-1 win over Leicester City on the first day of September, he didn't find the back of the net again in a league game until the end of October. He then had to wait until the match against Manchester United in the middle of December to register another Premier League strike.

However, he now has four goals in his last six starts for the Reds and his strike against West Ham United was his 11th goal of the season in the English top flight. He's just two goals shy of his best ever return since moving to England and there are still 13 games left to play.

For the fifth consecutive season, Mané has reached double digits in league competition in terms of non-penalty goals. It's a feat, as flagged on Twitter recently, that Arjen Robben, Eden Hazard, Franck Ribéry, Gareth Bale, Heung-min Son, Marco Reus and José Callejón have all failed to match.

It's a remarkable achievement for a player who has moved leagues, moved clubs and played different roles within these teams. And he's managed this season while appearing to be out of sorts.

But like with so many Liverpool players this season, his form this time around is being compared to last season, despite the Reds operating in a different system.

The graphic above compares some of Mané's stats for the past two seasons. As you can see, his goals-per-90 total is up to 0.51 from 0.40. His average for post-shot expected goals per 90 – which not only takes into account where the shot was taken from but whereabouts on the target it hits – is up, too.

This suggests the 26-year-old has improved his finishing and this is backed up by the shot accuracy stat. Whereas last season 37.1 per cent of his shots hit the target, this time around that number has risen to 50.9 per cent. The Liverpool No.10, who averages 2.55 shots per 90 this term, down from 2.85, is getting at least one shot on target every single match now.

He's scoring once for every 2.55 shots on target this season in the English top flight. Not bad for a player sometimes accused of being wasteful.

The Mané fans are seeing this season is simply a more ruthless finisher. Creating has taken a back seat, with Salah upping his creative output. Klopp's tasked him with being a more aggressive presser, as flagged on Anfield Index's Under Pressure podcast, and this is kind of backed up by his defensive numbers. 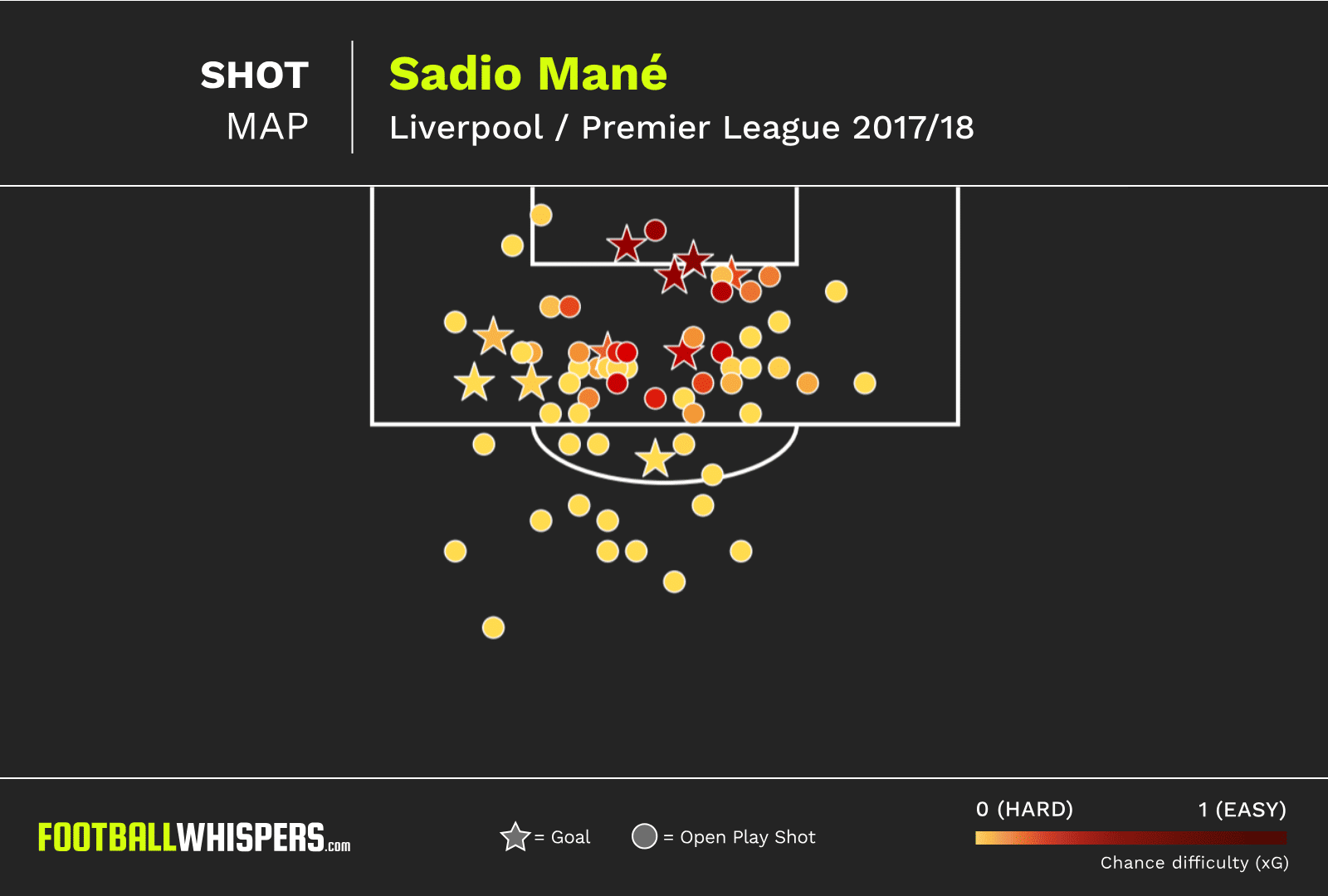 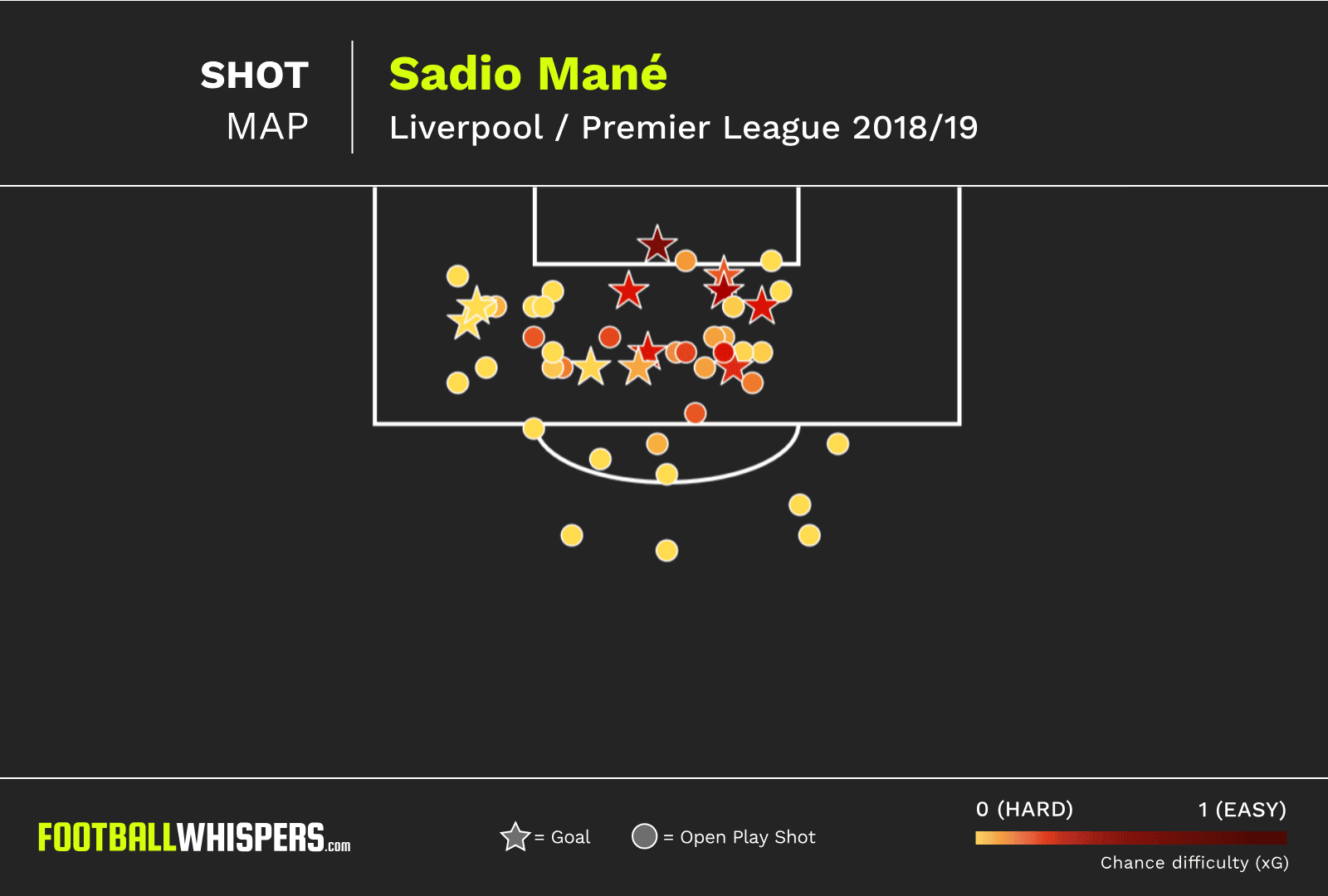 When comparing Mané's shot maps for the past two seasons you start to see how he's matured as a player. He's taking fewer shots from outside the penalty area while more of his goals are coming from central areas.

The shots he's taking on are also those with a higher expected goals (xG) percentage. He's taking easier shots from better positions and that is perhaps why his post-shot xG90 numbers are up, as is his shooting percentage.

He's not the Mané of last season but that doesn't mean he's not as effective or as important to this Liverpool side. If anything he's perhaps even more integral now with his ruthlessness giving the Reds more of a clinical edge when it matters most.