The 2018 World Cup opener isn’t even the tournament’s curtain-raiser. Spain have stolen that moment, firing manager Julen Lopetegui on the eve of the event, domestic club politics to blame after he was announced as Zinedine Zidane’s successor at Real Madrid.

Many have commented that it could be the worst World Cup opener in the tournament’s history, although the Financial Times reckons that accolade belongs to South Africa vs Mexico in 2010.

Ghosts of tournaments past

Still, at least that game felt poignant. It was the first World Cup to be held on African soil, a purer time before FIFA’s globalisation attempts led to the game’s showpiece event being awarded to Qatar.

And, as it turned out, it opened with one of that tournament’s best moments – Siphiwe Tshabalala’s goal.

The first World Cup of the millennium opened with another great game, holders France losing 1-0 to Senegal in their first ever appearance on the world’s biggest stage.

Meanwhile, 2006 got underway with a bang of a different sort. A young Phillip Lahm made a name for himself by scoring the opening goal in what would finish a 4-2 thriller between hosts Germany and Costa Rica, capped off by Torsten Frings’ screamer.

And in 2014, though the hosts didn’t end up playing their usual brand of scintillating football, there was something magical about watching a World Cup in Brazil.

From the very first moment it lived up to its promise, opening with an 60,000 strong Arena de São Paulo, bathed in yellow, singing the Brazilian national anthem. Loudly. And then, when the music finished, the second verse acapella.

After their humiliating semi-final exit, the passion with which the players belted out the words was used as a sign they weren’t emotionally ready, but watch it again, imagine seeing it for the first time, and remember how right it felt for football to come home to Brazil.

The 2018 opener has none of this allure, none of the fairy-tale sprinkle. If anything, it is two pantomime villains that are taking the stage.

While we may yet get a Tshabalala moment, where a moment of brilliance comes from an unexpected player, it seems unlikely.

Saudi Arabia have endured an unexpectedly turbulent time since qualifying. The coach who got them to Russia, Bert van Marwijk, couldn’t agree terms and left before signing up to coach Australia at the tournament.

Van Marwijk’s replacement was Edgardo Bauza, not long after the Argentine had left a short-lived time in charge of his own national team. His time with Saudi Arabia was even shorter, sacked after less than two months.

Juan Antonio Pizzi, who won the Copa America with Chile in 2016, will take charge in Russia, and will lead a competent if uninspiring team. He likes to keep the ball and to press, but whether he’ll be able to do that with the unfancied Middle Eastern team – particularly under the pressure of the tournament’s very first game – remains to be seen.

Meanwhile, Russia have stagnated severely since their semi-final appearance at Euro 2008. They have some talents in Fedor Smolov, subject of West Ham transfer rumours in January, and Aleksandr Golovin, a Manchester United transfer target. 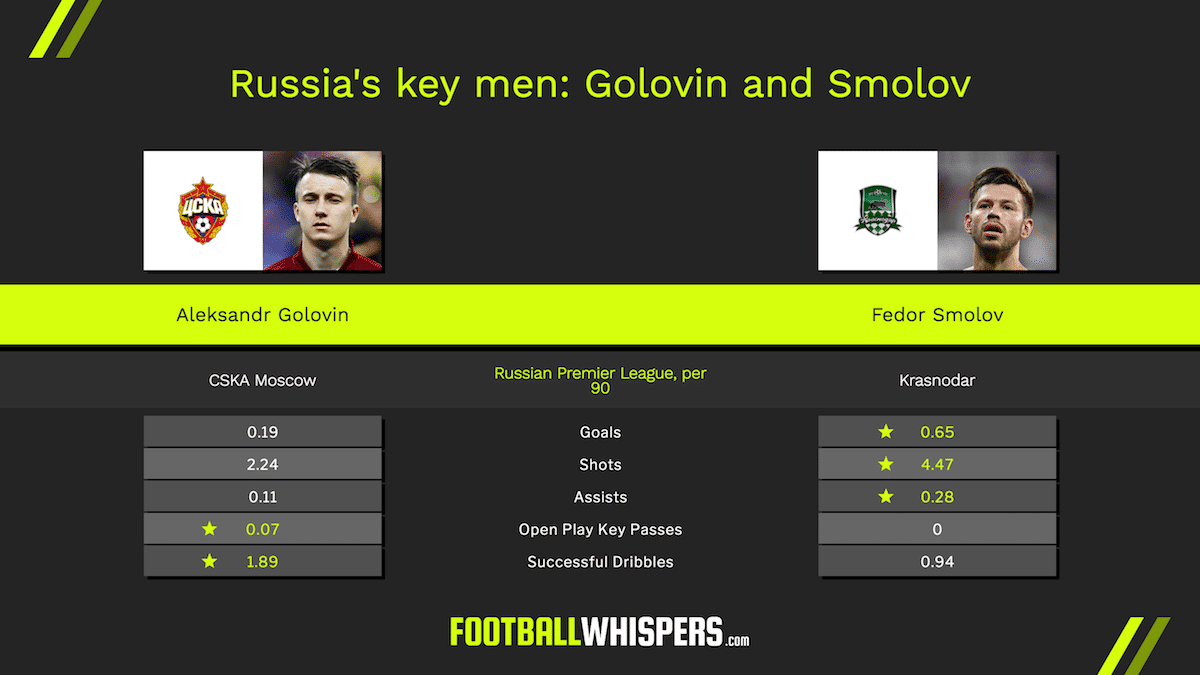 But not enough to stop former USSR defender Alexander Bubnov telling World Soccer: “It is our weakest national team in history.”

Against Saudi Arabia, the lowest ranked side in the tournament, they will surely take the chance to attack more than they will in their other group games. The Saudis will counter, which they did to cause a degree of trouble in their pre-tournament friendly against Germany.

The Russian back-line – which could be a back five or a back three depending on how conservative manager Stanislav Cherchesov is feeling – will likely drop off to absorb pressure, which could give the appearance of them being more vulnerable than they are.

Saudi Arabia’s qualifying matches saw an average of 2.7 goals per game and Russia drew with Spain 3-3 and beat South Korea 4-2 towards the end of 2017, so there could be goals.

But enjoyable football and an enjoyable story? Probably not.