The World Cup hosts have never lost the opening game of a tournament and 12 minutes into the 2018 tournament Russia were well on their way to keeping that tradition alive with a 5-0 victory over hapless Saudi Arabia, .

Two goals from Denis Cheryshev, and one each from Yuri Gazinsky, Artem Dzuyba and star man Aleksandr Golovin secured a much-needed three points and in the process helped the worst-ranked team in the tournament force a country to believe.

Going into the opening game, Russia had failed to win any of their previous seven fixtures and they had been labelled the worst Russian team of all time. It may have only been Saudi Arabia, who looked poor throughout, but it was a stunning performance from the hosts and, in front of the watching Vladimir Putin, just what the doctor ordered.

Uruguay and Egypt will be rubbing their hands with glee after witnessing some of the defending from the Asian side who, in turn, will be worried now about conceding more than the 12 they let in during the 2002 World Cup.

Russia face Mohamed Salah and co. next and, emboldened by this rout, there is no reason for them to think qualification is beyond them.

Golovin lives up to the hype

No one in the Russia team touched the ball more than Golovin on Thursday.

His five key passes was more than double anyone else on the pitch. With five crosses and 71.4 per cent of his 35 passes completed it was a midfield master-class from the Juventus and Manchester United transfer target.

For the opening goal, it was the 22-year-old who took the ball with his right-foot and played a beautiful in-swinging cross and Gazinky headed Russia ahead in the 12th minute.

It was exactly the same type of cross United fans have seen at Old Trafford from Paul Pogba and they would have been drooling at his opening performance for the hosts.

Dzyuba had been on the pitch for just 89 seconds when Golovin picked him out with another inch-perfect cross, this time from the right-hand side of the box.

Saudi Arabia couldn’t contain the CSKA star and he would add the finishing touch deep in injury time with a dipping, swerving free-kick which beat Abdullah Al Mayouf in the Saudi net and capped a stunning performance from Russia and Golovin.

It had been quoted the midfielder was worth €25million before the opening game – that may have already doubled. He still has at least two games to play.

Just 22 minutes into their first game, Russia, although 1-0 up, were dealt a huge blow, one which will be felt going into the next two group games.

Hitting Saudi Arabia on the counter, CSKA Moscow attacker Dzagoev went down clutching his hamstring and had to be replaced.

Although Dzagoev was only on the pitch a short time, the 27-year-old was turning the clock back to 2012 and showing why he was linked with some of Europe’s big clubs.

He is Russia’s architect, the creator, and a number of dangerous attacks were built through the hosts' No.9.

Against Egypt and Uruguay, his presence will be surely missed if the injury is serious enough to keep him out for the rest of the tournament.

In 58 games, Dzagoev has nine goals and eight assists for the hosts. Cheryshev came on and scored twice, like him, the rest of the squad will have to step up in  his absence. 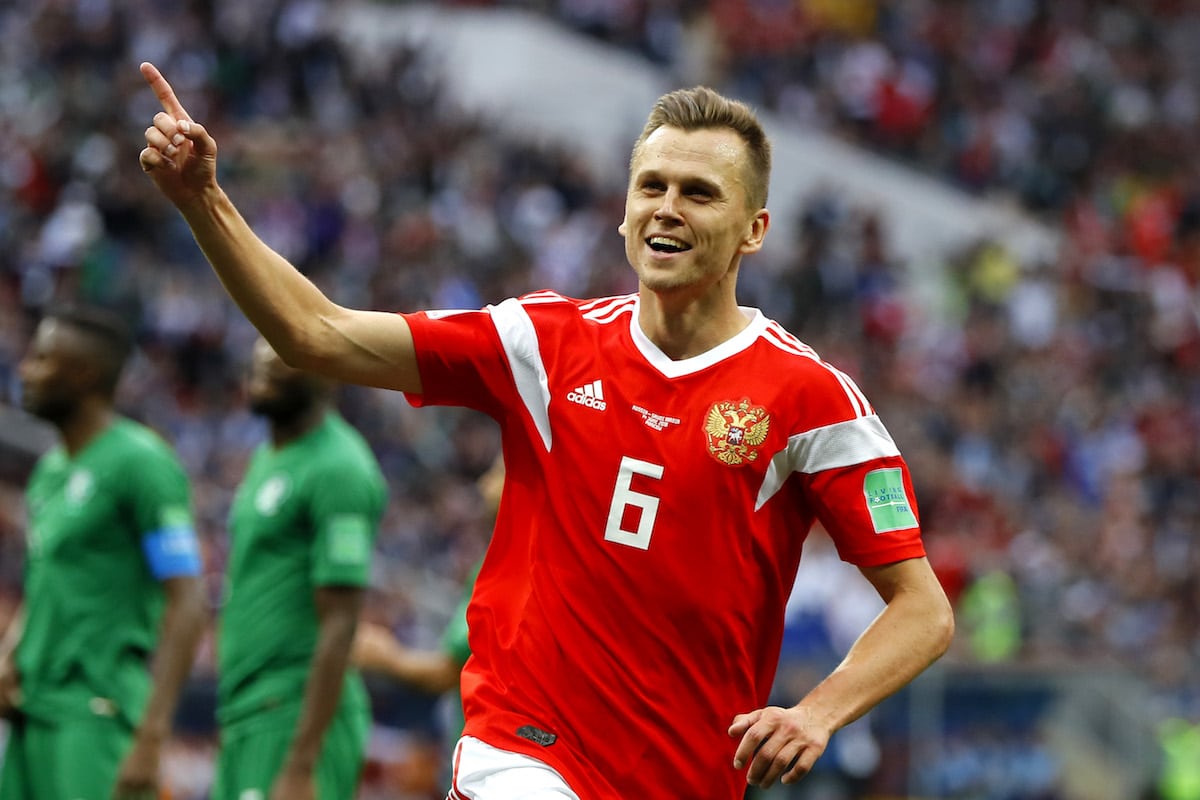 With one swipe of his left-foot, Denis Cheryshev became the first substitute to score in the opening game of the World Cup.

The 27-year-old only scored twice for Villarreal in 27 appearances in La Liga, but he finished with two against Saudi Arabia as the hosts picked up the perfect opening day victory.

When Dzagoev was forced off it was Cheryshev who took his place with Golovin moving inside. Coach Stanislav Cherchesov's hand was forced, but it was made to look like a masterstroke.

Cheryshev's mixture of powerful running and skill to cut inside gave the Saudi defence a torrid evening; his sublime finish with the outside of his left-foot in injury time was well deserved and a memorable way to kick-start the tournament.

The substitute finished with just 36 touches, compared to Golovin’s 66, but his four shots and two completed dribbles played a huge part in the win.

No doubt it will soften the blow of the injury to their main creator.

Defending an issue for Saudi Arabia

Making the jump from the Asian qualifying group to the World Cup was never going to be easy. But to have a chance you need to do the basics.

The Green Falcons have shown in just one game they are defensively poor. Russia’s powerful running and breaks from the middle of the park caused numerous problems and they could not stem the flow.

The midfielders failed to track runners , defenders didn’t cover the way you are taught from day one and Russia pierced the Saudi defence time and time again.

With Uruguay and Egypt to come in the final two games, it doesn’t bode well for Juan Antonio Pizzi’s team.