Liverpool appear to have set out to right their wrongs of yesteryear in this transfer window. After reigniting their interest in Mohamed Salah the Reds have turned their attentions back to long-term transfer target Rúben Neves.

According to A Bola, a news outlet in Portugal, Porto are prepared to let the 20-year-old midfielder leave just days after allowing star striker André Silva to join AC Milan in a €38million deal.

The report goes on to suggest England is more than likely going to be his destination this summer with Chelsea joining Liverpool in the battle for the Portuguese playmaker.

It's not the first time the two clubs have shown an interest in Neves. Back in January 2015, Liverpool were said to be scouting the heir to Sergio Busquets' crown as best holding midfielder in the world.

Then in October 2015, just weeks after Jürgen Klopp replaced Brendan Rodgers as manager at Anfield, the Mirror claimed the Reds sent scouts to watch Neves in a Champions League match with a view to buy in January 2016. 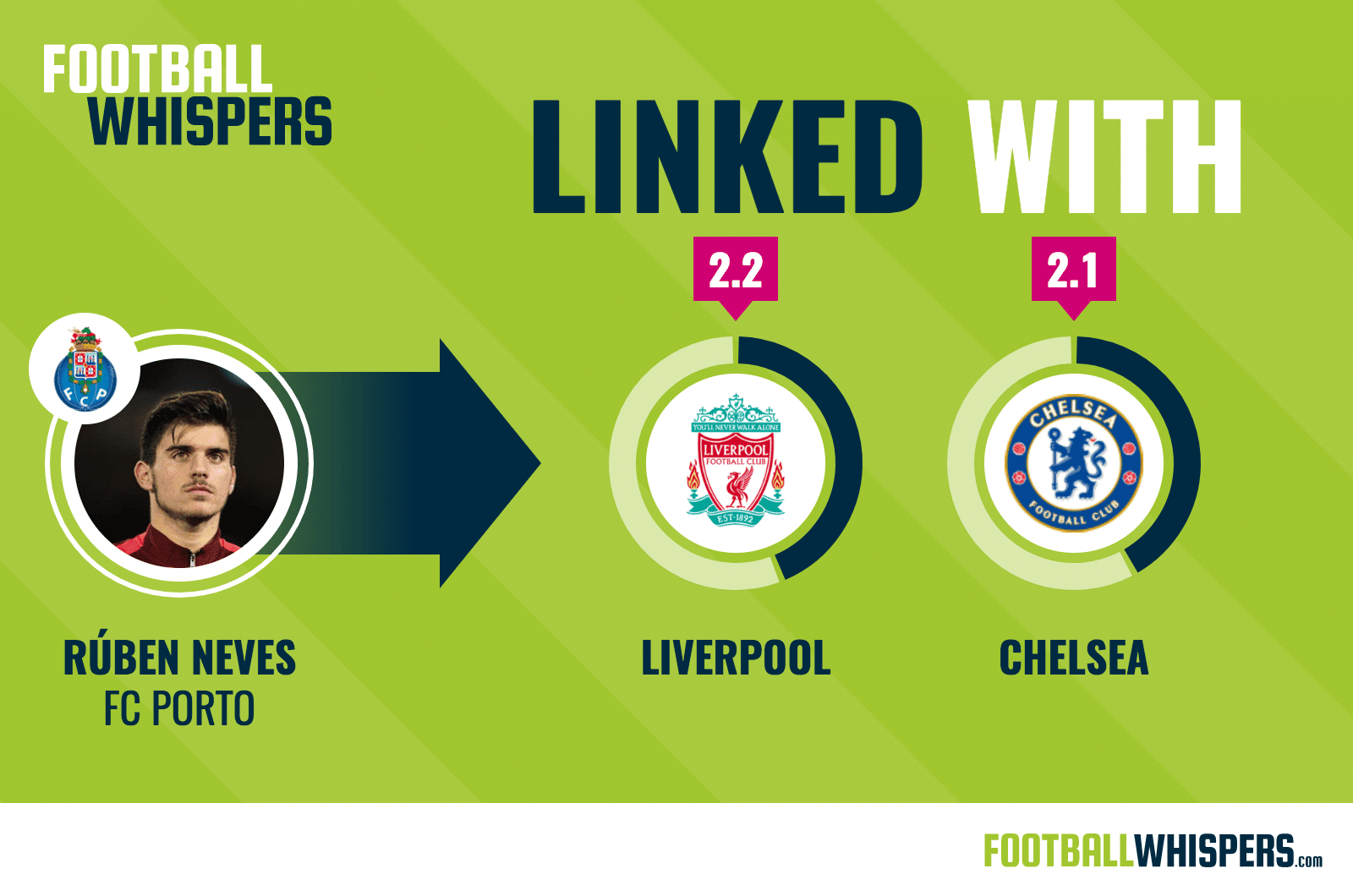 The most recent link came to light a mere two days after Corriere dello Sport reported Liverpool had seen a £24million bid for Lazio midfielder Sergej Milinković-Savić turned down. The Rome-based club want closer to £70million for the Serbian powerhouse.

While Fenway Sports Group may have loosened the purse strings a little this summer and are prepared to break the club's record transfer fee, it's unlikely they would sign off on such a deal for the 22-year-old Lazio man.

Alternatives are needed and this is perhaps why Neves' name has once again risen from the ashes. The fact Porto need to sell players due to their financial troubles is just a bonus.

The 20-year-old has seen his stock dramatically fall over the past 18 months. Once touted as a player with the potential to be the best in the world, he made just six starts in the league last season and one in the Champions League.

Nuno Espírito Santo, now in charge of Wolverhampton Wanderers, returned to manage Porto ahead of the 2016/17 season and wasn't taken with the once highly rated deep-lying playmaker.

Throughout the campaign he opted to use the more experienced, destructive Danilo as the holding midfielder. The fractured relationship between the manager and the player even resulted in the latter pictured crying on the substitutes bench during a Champions League match.

He was instructed to warm up and get ready to come on before the manager changed his mind and Neves made his way back to the bench, a forlorn figure.

Managers have favourites and by no means is it indicative of the quality of the player. Liverpool fans should know that better than most after the final season of Brendan Rodgers at the helm.

Liverpool fans should be excited about the prospect of landing Neves. He's almost too perfect in terms of what FSG look for in a potential young signing. He's undervalued, in need of new surroundings to flourish and he has some serious potential. He could turn out to be a bargain, even at the reported £35million fee.

“We try and find the best player to construct the game out from the back, to have the right timings, to have the pause and ability to speed it up. And Trent always plays there. No. 6. My Ruben Neves. I always put Trent at 6. Why? Because every attack he is the main guy, the pivot, the lighthouse of the team, guiding the rest.”

The fact he's looking for players to be his Neves shows how highly he rates the midfielder.

What does Neves offer?

Neves is an all-rounder in playing terms. He’s not just a defensive midfielder but, similarly,  he’s not just a deep-lying playmaker. Placing him in one category is disrespectful. He merges the two roles together and under the right guidance he could excel in either or both roles. He’s a hybrid.

For those familiar with Fernando Redondo, there are comparisons between the two.

He’s the type of player to shield the defence, make an interception but instead of playing it to his midfield partner he’d opt play an incisive pass forward into the attacking midfielders feet which gets the team on their way.

It's hard to read into his stats given the sample size isn't the largest and the previous seasons, when he did feature prominently, aren't recorded on Whoscored.com.

When it comes to passing he has the ability to mix it up. He can play the simple passes, the long diagonal switches and he can also execute more creative, between the lines passes.

What’s admirable when watching him play is how he always seems to be brave when in possession. When you’re a tempo-setting midfielder it’s vital to get the team going; it may be tempting to play simple passes here and there but Neves always seemingly looks to play the ‘risky’ passes and Porto looked much better with him in the side.

It can be viewed as a negative because he occasionally loses the ball but it should be seen as a positive that he has the confidence to even attempt some of these passes. It’s an asset to have when you’re up against teams with two compact lines of four, which Liverpool encounter on a regular basis. He has the ability to break through these lines with a single pass.

He’s disciplined without the ball but expressive when on it.

He tracks runners all over the pitch and even drops between the centre-backs when necessary meaning he builds attacks from deep, similar to how Jordan Henderson and Emre Can operated last season.

He would arrive on Merseyside with both Europa League and Champions League experience. He also had the honour of captaining Porto and becoming the youngest captain in Champions League history. It shows he has leadership qualities something many accuse Liverpool of lacking.

Of course, there are weaknesses to his game. He’s still young so he’s going to be inconsistent. It's expected. It’s going to be a few years before he can really dictate games by himself but the key part here is he has that ability.