Last summer was big for Ruben Loftus-Cheek. Having been part of the Chelsea youth set-up since he was eight, he opted to join another club on loan for the first time.

Breaking into the first-team at senior level proved difficult, however, after being promoted by José Mourinho in late 2014.

And while Loftus-Cheek has certainly made more of an impression at Stamford Bridge than Izzy Brown, who earned a senior call-up from Mourinho at the same time, he is still yet to become an established fixture on the teamsheet.

Twelve months ago, with N'Golo Kanté, Cesc Fàbregas and new signings Tiemoué Bakayoko and Danny Drinkwater ahead of him in the pecking order under Antonio Conte, Loftus-Cheek joined Crystal Palace.

A key figure in the England U21 set-up, Loftus-Cheek recognised that starting Premier League games regularly was essential if he was to break into the Three Lions' senior squad.

Arriving at Selhurst Park, the World Cup was a pipe dream. However, following a string of impressive displays at the heart of the Eagles' midfield, Loftus-Cheek was included in Gareth Southgate's World Cup squad with only 125 minutes of friendly international football under his belt.

Loftus-Cheek started three games in Russia, after an eye-catching ten-minute cameo in the opening group victory over Tunisia.

Following the tournament, having showcased his abilities for his country, Loftus-Cheek refocused his energy on breaking the glass ceiling in West London.

But, once again, the youngster looks as though his contributions to Maurizio Sarri's first season at the helm will be sporadic at best.

The Italian, who replaced Conte, has two high-profile new recruits in midfield at his disposal in Jorginho – his trusted on-field lieutenant from Napoli – and Mateo Kovacic, whose presence makes Loftus-Cheek's challenge more daunting.

He does, of course, have the option of seeking regular first-team action elsewhere. This week, reports emerged linking him with a loan move to Schalke. The Bundesliga side, coached by managerial wunderkind Domenico Tedesco, can offer Loftus-Cheek Champions League football and the chance to be part of an exciting project under an emerging European tactician.

As per The Guardian, however, Loftus-Cheek will rebuff interest from Germany in favour of fighting for his place at Chelsea. It's a bold move, for sure, but is it the right one?

There is a strong case for leaving. Recently, England starlets have found success abroad.

Having broken into the England team, Loftus-Cheek will be understandably reticent about the idea of leaving the Premier League. However, Southgate is an astute mind and a coach who will not overlook players for selection purely based on where they are plying their trade.

In an ideal world, Southgate wants Premier League teams to give England's brightest young talents a chance to prove their worth.

Having led England to fourth in Russia, Southgate called on club managers to show ‘bravery' with regard to developing the Three Lions' next generation, recognising that, while the likes of Jordan Pickford, Harry Maguire and Kieran Trippier bolstered their reputations at the World Cup, their developing into elite footballers has occurred mainly at club-level.

Although Loftus-Cheek may feel that, having performed admirably for Palace, he has proven himself to the point at which he deserves more from Chelsea, he should afford a potential move to Schalke plenty of consideration. After all, they finished second in the Bundesliga last season.

Patience can be rewarded at Chelsea

But, as previously stated, Loftus-Cheek will be 23 in January and has reached a stage in his development in which he feels ready to feature prominently in the blue of his boyhood club.

Loftus-Cheek's physical and technical capabilities are well-documented at this stage. His most distinguishable attribute is his dribbling. For Palace last season, he averaged 3.5 successful take-ons per 90, behind only Southampton's Sofiane Boufal (4.52) for midfielders.

Loftus-Cheek was a driving influence through the centre for Palace, scoring two goals and notching three assists. Had it not been for an ankle injury which ruled him out for three months between December and March, he probably would have added to those tallies.

His stats compare favourably to Kovacic, with whom Loftus-Cheek would compete for a starting berth (Ross Barkley will have his say, too). Kanté and Jorginho are nailed-on starters so the third midfield spot in Sarri's 4-3-3 is up for grabs. 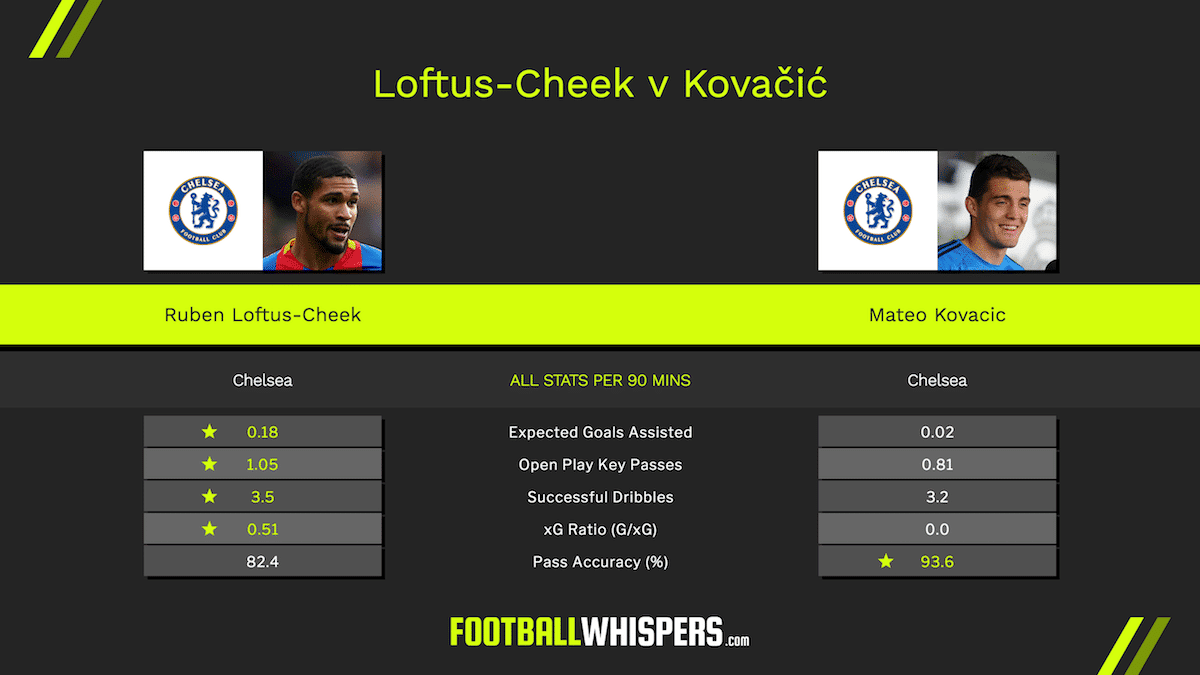 The 24-year-old Croatian is, however, a more accurate passer, with 93 per cent to Loftus-Cheek's 82 per cent.

Following the pre-season clash with Lyon, Sarri's comments suggested that, in time, Loftus-Cheek could be a factor in his Chelsea reign: “He is potentially a great player. He has to improve from the tactical point of view but I think it's not a problem. He is very young, he can be a very useful player for us.”

Sarri has a point. Loftus-Cheek carries the ball well and is a threat in the final third, but positional awareness is crucial in the Italian's system. That is something the midfielder hasn't quite mastered yet but can come in time through application and appetite.

It's an interesting situation for Loftus-Cheek. Chelsea's status and ambition means competition with marquee signings will always be a factor for those looking to kick on from academy success. He seems to be on the precipice of breaking through and, if he were to stay and seize his opportunities under Sarri, his Chelsea career would begin to look infinitely brighter.

While we cannot completely discard the benefits of embarking on a continental challenge (Schalke are a fine club transformed by Tedesco's ingenuity) Loftus-Cheek should stay with Chelsea, exercise patience and his time will come, just as it did with England.