With England heading for a less than satisfying 1-1 draw against Tunisia in their opening World Cup group game, Gareth Southgate turned to Ruben Loftus-Cheek.

There were only ten minutes left for the 22-year-old to make an impression, to change the game, but his influence was significant as England went on to score a late winner.

Such is the reactionary nature of covering England at a World Cup, there have now been calls for Loftus-Cheek to start the next group game against Panama on Sunday.

He gave the Three Lions something different through the centre of the pitch, driving forward to open up pockets of space for others. It’s the role Alex Oxlade-Chamberlain surely would have played had he been fit.

Now, on the back of his impressive ten-minute cameo against Tunisia, Loftus-Cheek is reportedly a Newcastle United transfer target. Despite uncertainty over the ownership of the club, the Magpies are looking to build on their tenth-place Premier League finish last season and the England international would be a shrewd addition.

Last season Jonjo Shelvey largely carried the weight of creative expectation for Newcastle. The former Liverpool man could actually have been picked by Southgate for England ahead of Loftus-Cheek. It might well have come down to a decision between the two.

But far from usurping Shelvey at club level like he may have done for England, the arrival of Loftus-Cheek could ease the pressure on his new midfield team-mate. 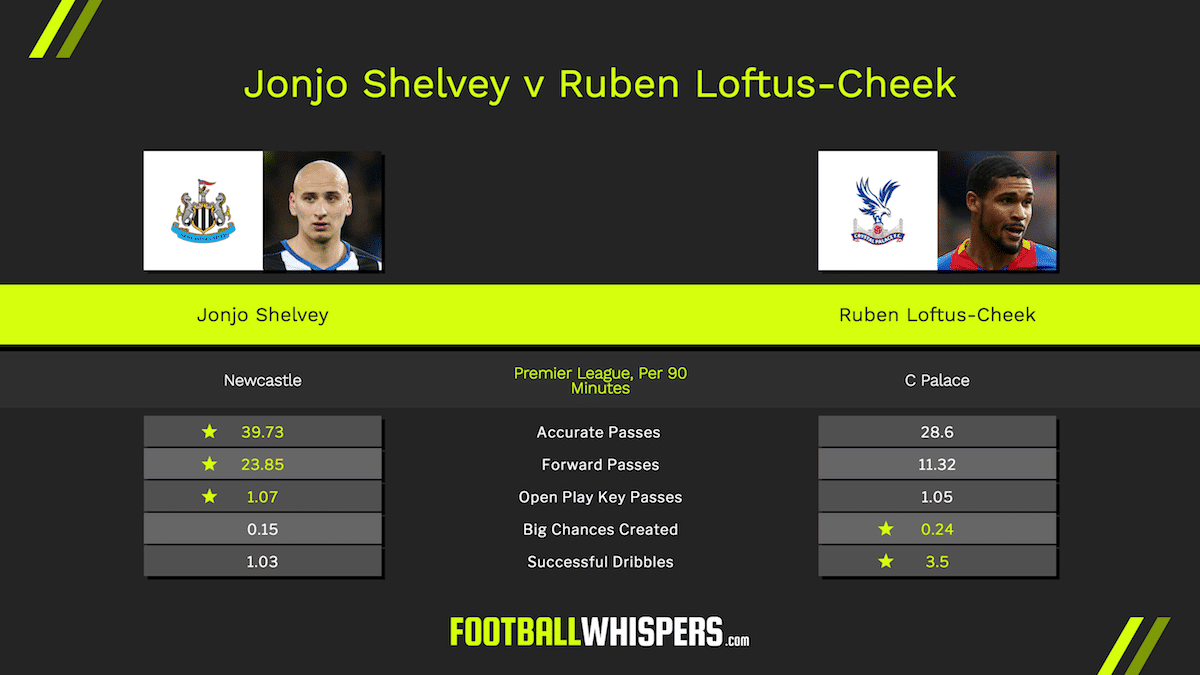 In fact, the two could compliment each other well. Shelvey was used as something of a footballing quarterback by Newcastle last season, averaging 14.29 long balls per 90 minutes. Loftus-Cheek, in comparison, averaging just 1.72 per 90. The latter was slightly more effective in creating opportunities, though, producing 0.24 big chances compared to Shelvey’s average of 0.15 per.

Loftus-Cheek is more effective at driving through the lines of midfield and attack, averaging 3.5 successful take-ons per 90, while Shelvey only averages 1.03.

The pair would give Newcastle variety in the centre of midfield, something their respective Player Personas – exclusive to Football Whispers – show below.

While Shelvey's game is characterised by passing, Loftus-Cheek's shows his tend to dribble with the ball, creating more chances and shooting with greater frequency.

Loftus-Cheek should look at Kenedy for a precedent to follow. He made the move to the North East on loan from Chelsea last season and thrived, becoming a key figure for Newcastle as they surged to a top-half finish.

The Brazilian was so successful at St James’ Park he is now reportedly a Paris Saint-Germain and Bayern Munich transfer target with Newcastle also keen on signing the 22-year-old permanently.

It’s not beyond the realms of possibility that Loftus-Cheek could make the same sort of impact. This is, after all, a player long tipped for big things. At 22, he is already proven at Premier League level and, if he continues his form for England, at international level too.

But he finds himself at a critical juncture of his career.

Having showcased what he can do on loan at Crystal Palace last season, Loftus-Cheek seems unwilling to sit on the bench at Chelsea next season.“That’s the key for me next season regarding where I end up: I want to play,” he said this week when asked about his future.

“I do understand Chelsea are a big club and there is always pressure on managers to win games and trophies. So I understand they might not be willing to take a chance on someone at a bigger club. We’ll see what happens.

“I’m confident in my ability and that I can do well, wherever it is. But I’m not thinking about whether I’m going to play at Chelsea right now. I’m only focused on the tournament.”

Some will argue that Chelsea should be accommodating Loftus-Cheek in their first team plans, but with Antonio Conte’s future at the club still up in the air it’s difficult to know where the midfielder stands.

Newcastle could, therefore, be the perfect place for him to make the next step in his career. He can’t afford to wait around for the stars to align in his favour at Stamford Bridge.

From both the player and the club’s perspective, a move to Newcastle for Loftus-Cheek would appear to make sense. The move would allow Rafa Benítez to ease the burden on Shelvey to be the Magpies’ sole creative force through the middle of the pitch, while granting Loftus-Cheek the opportunity to grow and develop. They fulfil each other’s needs.