There was little for Chelsea fans to enjoy during their defeat against Liverpool at Anfield. The game was a sobering experience, a reminder of just how far the Blues have fallen in the past two seasons.

Yet there was one, albeit rather small, glimmer of light in the darkness. The performance of Ruben Loftus-Cheek.

The 23-year-old has long been touted as a star in the making. A player who Chelsea could build their midfield around for years to come. However, injuries and the lack of opportunities afforded to young players at Stamford Bridge stifled his development.

A loan spell at Crystal Palace last season got Loftus-Cheek back on track and he also helped England reach the World Cup semi-finals last summer. But at the start of the current campaign he wasn't a regular in Maurizio Sarri's starting XI.

The Italian felt Loftus-Cheek lacked the tactical acumen and defensive nous to feature in his midfield three. When he was given a rare opportunity in the side, the England international was deployed further forward as one of the two wide players behind the striker.

“He (Sarri) told me I needed to improve my positioning and develop my defensive awareness if I wanted to play in midfield for him,” Loftus-Cheek admitted in an interview with Chelsea's in-house magazine.

“But I worked hard on the things he had talked to me about and I think I’ve improved a lot on that aspect of my game. And he seemed to see the improvement and I think he sees me as a midfielder now too.

“I completely respect the honesty of that and it gave me something to work towards. I’ve improved off the back of it and now I’m playing in midfield, so he’s an honest guy.”

Since the turn of the year, Loftus-Cheek has, either from the start or more often when introduced from the substitutes' bench, be utilised in Sarri's midfield trio. He is battling Ross Barkley and Mateo Kovačić for a place alongside Jorginho and N'Golo Kanté but when available it's really a no contest.

The Chelsea academy graduate possesses the technical skill of Kovačić and the forward drive of Barkley. He also is a far bigger goal threat; his return of five in the top flight better than his fellow England international (three) and the Croatian (zero). 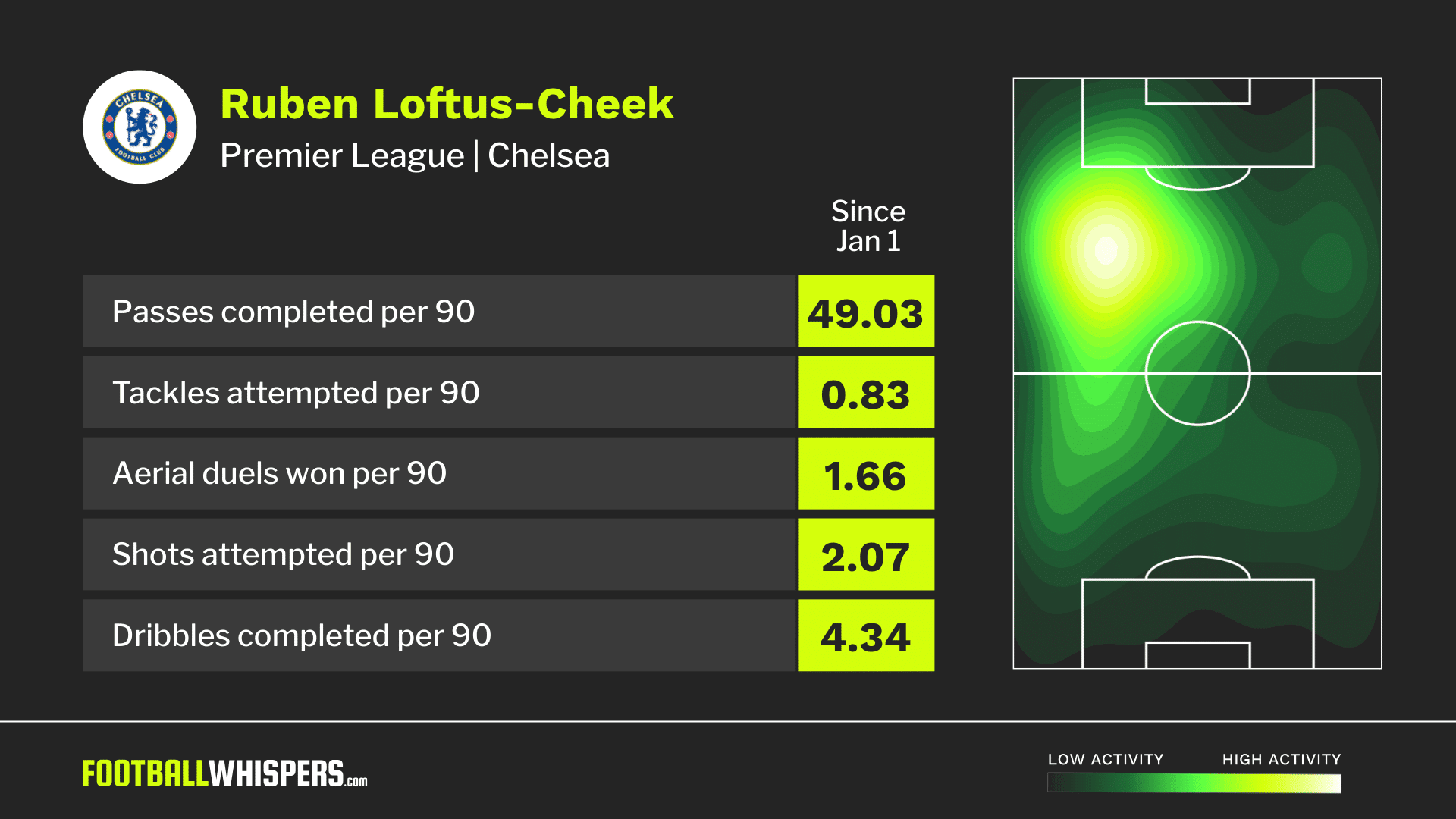 And then there is the physical presence he adds. Standing 6ft 3ins, Loftus-Cheek can't be bullied and there are few stronger players in Europe when in or out of possession.

Take the game at Anfield, for instance. In the 14th minute a pass was clipped into Loftus-Cheek in the Liverpool penalty area and the ball escaped his reach. Virgil van Dijk, arguably the best defender in England, mopped up as he so often does. The danger, it appeared, had passed.

Yet the Chelsea No.12 chased down his loose touch and in one motion shrugged the Dutch centre-back off the ball and kickstarted a Blues attack.

That strength combined with his technical ability is why Loftus-Cheek rarely loses the ball when striding forward. Opponents simply bounce off him when they attempt a challenge. It's why, since the start of 2019, only two Premier League players – dribble-merchant Adama Traoré, and Eden Hazard – can better his 4.34 successful take-ons per 90.

Defensively, he is also making his mark and has averaged more interceptions per 90 and has won more aerial duels per 90 than both Barkley and Kovačić since New Year's Day.

“He has developed a lot, especially tactically,” Sarri said when asked about Loftus-Cheek earlier this month. “He is now tactically a very good midfielder. At the beginning of the season he was a very offensive midfielder. Now he is complete.”

Loftus-Cheek has had to be patient at Stamford Bridge. And it's perhaps only because the club he joined as a boy are no longer challenging for titles that he has finally been given an opportunity to shine.

However, if the Blues are to rebuild, are to return to the top of the Premier League in the near future, the midfielder is a foundation the team must be constructed around.