João Félix may be the player stealing the spotlight at the Estádio da Luz this season but he's not the only star Benfica have on their books.

Along with Ferro, Gedson Fernandes and Alex Grimaldo, the Primeira Liga leaders have one of the most highly-rated centre-backs in world football at their disposal in Rúben Dias.

The 21-year-old powerhouse is enjoying yet another dominant campaign at the back. He's built on being named the Portuguese's top flight's Young Player of the Year last year and is now considered by many to be the best centre-back in the country.

And according to Portuguese newspaper Record, Manchester United have started negotiations with both player and club but Juventus remain in pole position to land the Portugal international.

However, of the two sides supposedly interested in Dias, it's clear that United are the ones who need him more.

Though both the Red Devils and the Serie A champions could afford his reported £51million release clause, United may be able to put together a more lucrative package for the player with Juventus having to finance their move for Aaron Ramsey and perhaps going big to land Félix. 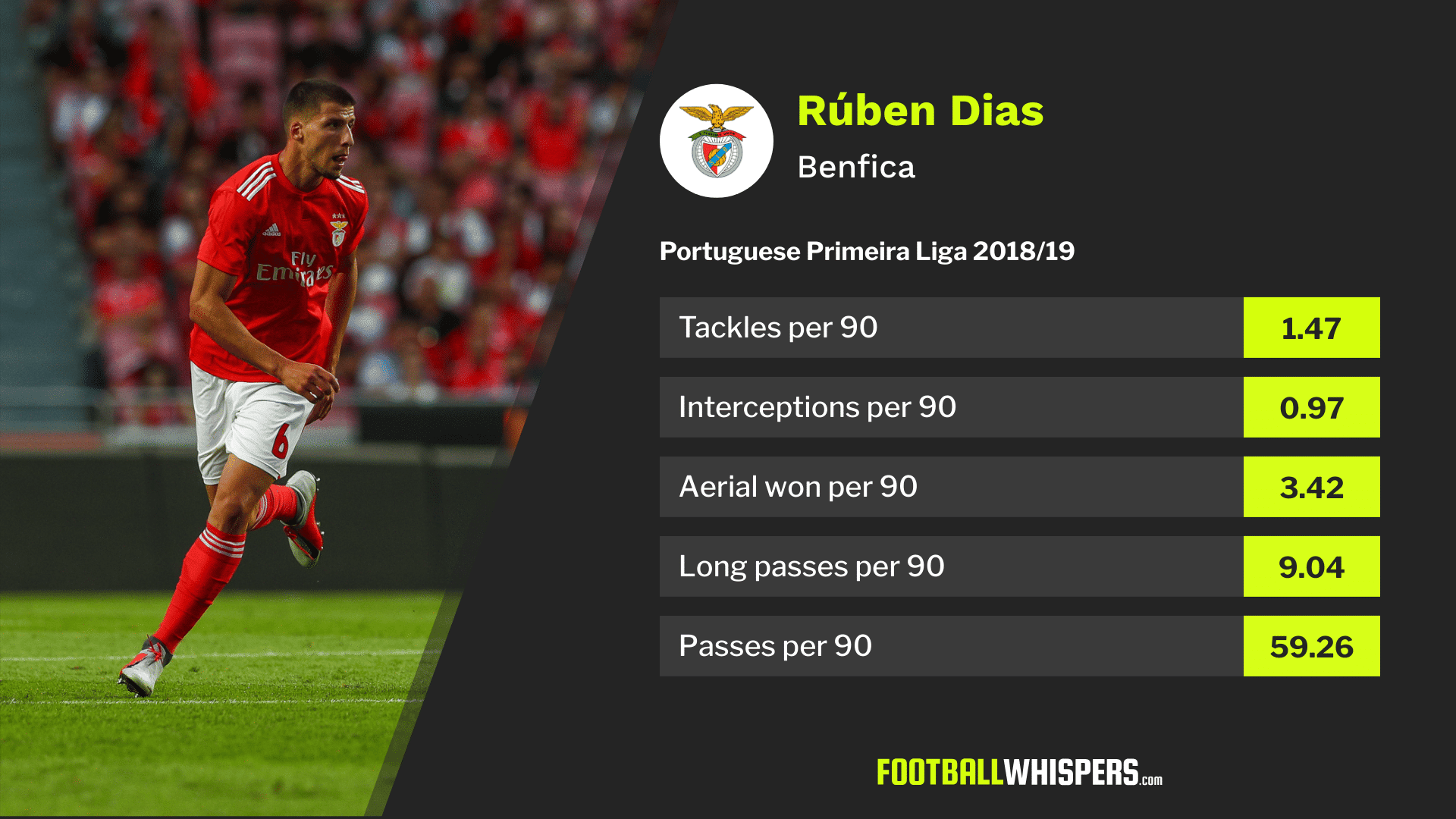 So while Ole Gunnar Solskjær won't have a free run at Dias, United should feel as though they have a clear advantage due to the fact a centre-back is a priority this summer.

A £51million fee wouldn't make him the world's most expensive defender, that crown belongs to PFA Player of the Year Virgil van Dijk, but no defender under the age of 22 has cost more.

Some players aren't burdened by their price tag. Others are. The pressure would be heaped on Dias before he even arrived at Old Trafford. So, is he worth the risk?

The Benfica No.6 wouldn't be the first centre-back to make the move from Lisbon to Manchester. United parted with a fee believed to be in the region of £30million in the summer of 2017 to sign Victor Lindelöf. His transition period wasn't smooth and only now are the Red Devils seeing the player they paid for.

With United eager to get back to the top table, they need as close to guarantees as possible in the transfer market. The eye test suggests Dias is the real deal but do the numbers back that up? 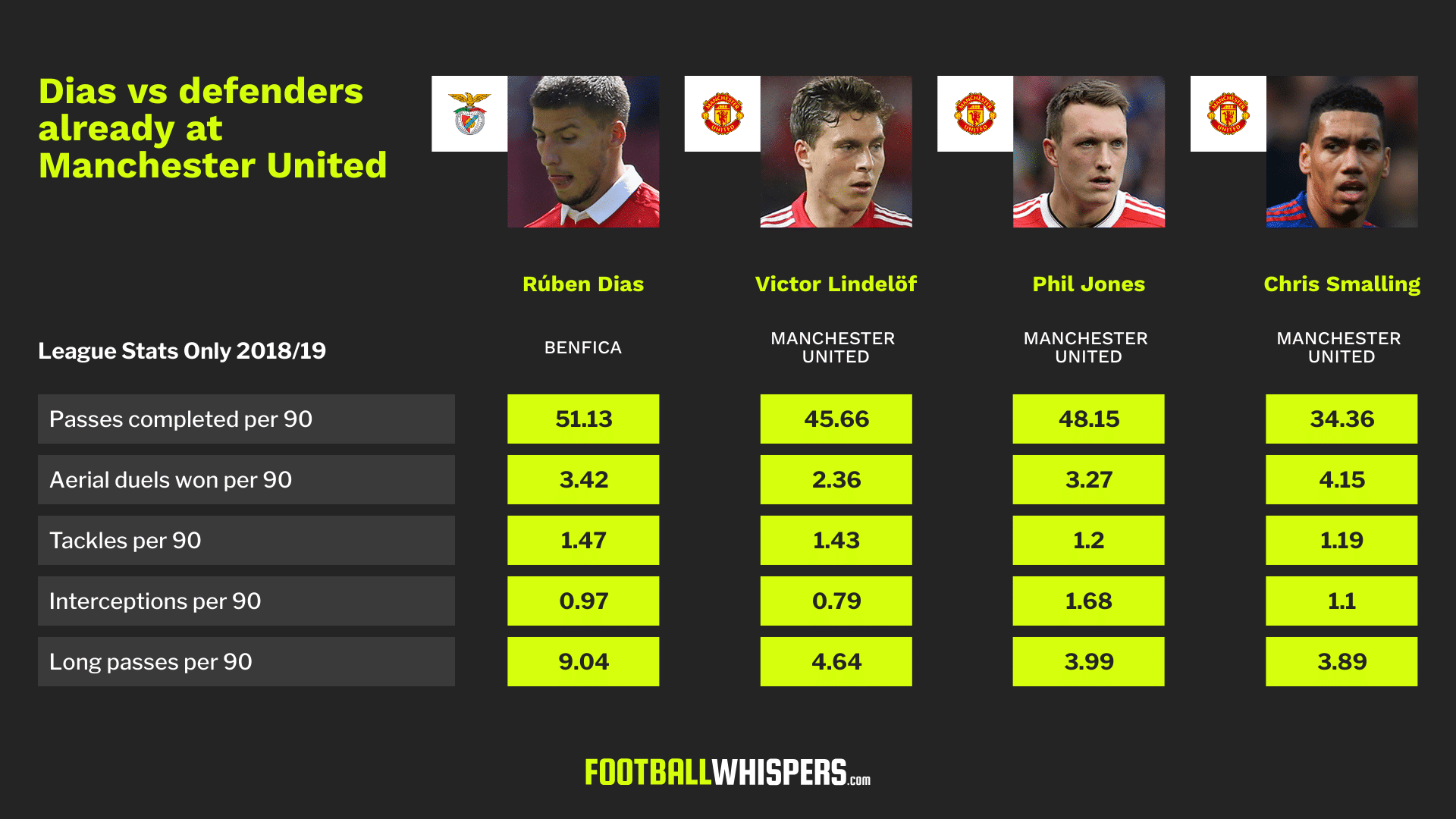 More often than not, the system players are being deployed in will have an impact on the stats they're able to post. For example, passes completed per 90 depend on whether a side is a possession-based and like to build out from the back.

Benfica average 57.3 per cent possession, slightly higher than United's Premier League average of 52.7 per cent. However, what it does show is that both teams see more of the ball in matches than the opposition.

Dias completes 51.13 of the 59.26 passes he attempts. He's confident on the ball and he's able to play out from the back if necessary. But if tasked with going long, getting the ball to Marcus Rashford and Romelu Lukaku, he's more than able to do that.

He plays more long passes per 90 than Lindelöf, Phil Jones and Chris Smalling while completing 51 per cent of them. When it comes to passing, he ticks both boxes.

He's dominant in the air, winning more aerial duels than Lindelöf and Jones on a per 90 basis. Again, though, this is very much dependent on how many long balls a team faces and whether or not they have to be the aggressive centre-back. The stats shows, if needed, he can be the front-foot defender.

Tackles and interceptions are a strange way to judge defenders. All they show is how busy a defender is, and not how good they are. Having said that, Dias' numbers are on par for the most part with the defenders already at Old Trafford.

Dias would be an intelligent signing. He can make an impact now but the real value is just how high a ceiling the young defender. He could develop into one of the best in the world down the line if given the environment to flourish.

He seems to thrive when tasked with more responsibility despite his young age. A move to Old Trafford, to help shore up the defence, is something that might enough to convince him to make that move.