Spartak Moscow vs Nizhny Novgorod Coventry vs Notts Forest Fulham vs Middlesbrough Today's tips Leicester vs Man City
18+ | Commercial Content | T&Cs apply | Begambleaware.org
Birmingham City’s fall from grace since sacking Gary Rowett is well-documented but it’s worth a recap regardless. Following a 2-1 win over Ipswich Town, the 43-year old’s departure came as a massive shock with the Blues sat in seventh, outside of the play-off places on goal difference and just three points behind Reading in third.
The 22 matches that followed under the tenure of Gianfranco Zola have seen the Italian’s appointment labelled as one of the worst in recent memory. Birmingham won just two times, picking up 13 points as only Rotherham United fared worse over the same period. The Italian duly Watford boss’ reign was an unmitigated disaster, the case remains that the decision to relieve Rowett of his duties was even less sensical.
The Blues’ squad is one of modest means to say the least, put together on a tight budget which made their league standing under the former Burton Albion boss remarkable. Their success saw Rowett earmarked for a job in the top-flight before long, so Birmingham’s huge loss looks set to be Derby County’s gain.

The Rams parted ways with Steve McClaren midway through March with their hopes of a top-siz finish all but over. Indeed, the timing of their decision perhaps had as much to do with Rowett’s continued availability as any great desire to mount a late charge. Here, after all, was a young manager with no blemish on his CV but instead a reputation for exceeding expectations. He wouldn’t stay on the market for long and Derby knew as much.
His appointment was a logical fit to contrast to that of his replacement at St. Andrew’s, having played for the club for three years. During that time Rowett won promotion to the Premier League and there’s no denying that his task is to achieve the same feat as a manager by the time his contract runs out in two years time.
The early signs are encouraging that the young manager already has the side headed in the right direction ahead of the new season. He’s now had eight games at the helm and while the club have only climbed one place, they couldn’t really expect much more from the position he came into. A tally of 14 points is a solid return in the time since when considering the two promoted sides have managed 15 and 14 in the cases of Brighton & Hove Albion and Newcastle United respectively.
It’s not been an easy start for Rowett. Beginning with the derby against Nottingham Forest and including three games against sides above them in the play-off places. The one real blemish was a 4-0 defeat at Brentford that followed a three-game winning streak. Even so the Bees have been in fine form, particularly at home, scoring more goals in 2017 than any other Championship side.
In four home games the side have picked up ten points with impressive wins over Fulham and local rivals Wolverhampton Wanderers and the fans have reason for optimism after a pretty uninspiring campaign before Rowett’s arrival. Indeed, it was an underwhelming record in front of goal, first under Nigel Pearson and then McClaren that had really held them back, boasting one of the league’s strongest defensive records all season. 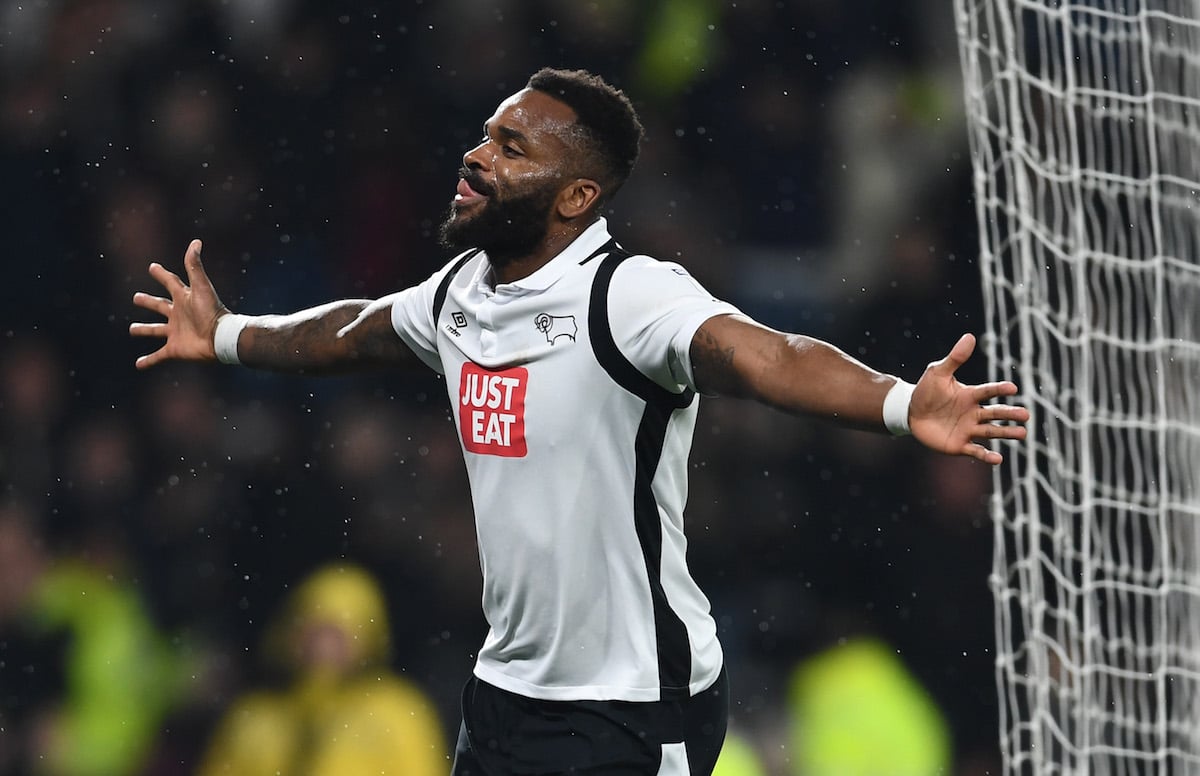 That’s the real positive impact that has been abundantly clear under the new manager with an average of 1.05 goals per game rising to 1.75 since Rowett took charge.
Only four sides have scored more over the same timeframe and their improved efficiency in front of goal is further highlighted by the fact that Derby’s conversion rate has almost doubled, from eight per cent to 14 per cent, testing the opposition keeper five times per game compared to 3.95 prior to the 43-year old’s appointment.
Such a marked improvement in finishing can be attributed to the famed new manager bounce to an extent, so what has Rowett changed as far as Derby’s approach play is concerned?
The team, after all, are actually averaging marginally fewer shots in total under his tenure, with the new manager placing less onus on possession football, going direct more often in a tactic that served him well with less talent at his disposal at Birmingham.
Derby have seen four per cent less of the ball on average under Rowett, which is not an insignificant drop off, completing 35 passes fewer per game, from 345 to 310. Long balls are slightly up by contrast, going more direct with 18% of their passes compared to 16%, while their accuracy from said long balls is also up from 39% to 43%. 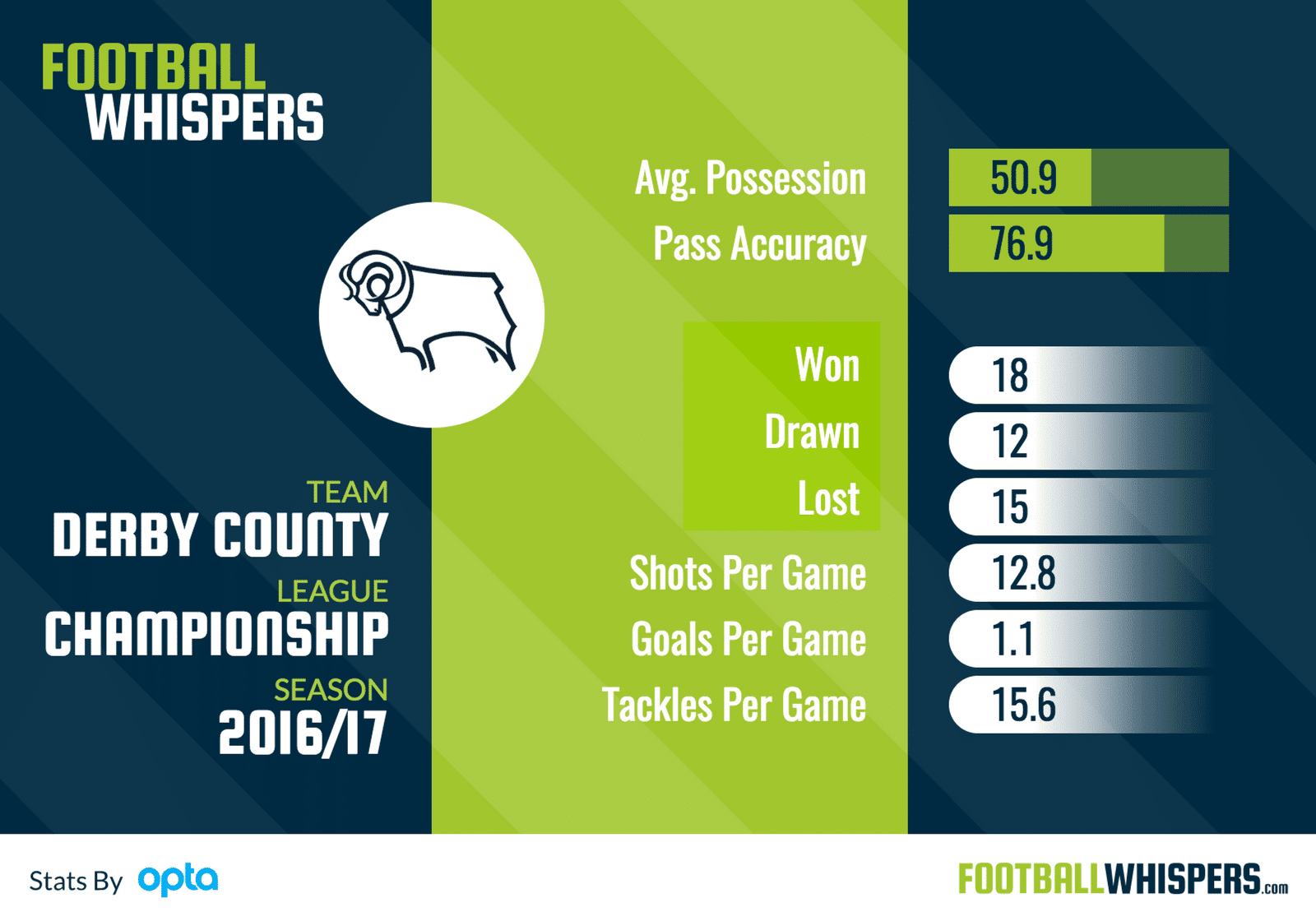 read more: carvalhal to take sheffields wednesday to next level

In terms of any cause for concern, the fact that Derby are shipping more goals under Rowett shouldn’t trouble the fans too much. The Rams have conceded considerably fewer shots on target per game under Rowett (2.9) than they were beforehand (4.1), suggesting that their goal had perhaps led a charmed life at times but also that the organisation of the team hasn’t been too much of an issue. They’ve faced good attacking teams in the form of Brentford, Fulham, Sheffield Wednesday and Huddersfield Town to boot.
It is, after all, the way that Rowett set his Birmingham side up that made them so difficult to beat. Only top of the table Brighton (2), lost fewer matches than the Blues (5) during his time in charge this season.
Rowett didn’t have the calibre of player to dominate matches or to really go for broke, instead fostering great spirit and commitment from his sides, and the same can be expected at Derby.
It’s this ability to grind out results that should serve the Rams in strong stead next season, and one that could turn this team of ‘nearly men’ into the real deal.