Today, we will check out the Tuesday fixture Rotherham vs QPR and post our top free betting tips on it.

Our experts gave their opinion on the fixture between Rotherham and QPR. They came up with the top wagering tips for the match and we will share them below.

Make sure to double-check all odds before placing any wagers, because they might have changed at any time. Our recommended bookmaker for this match is Ladbrokes.

Rotherham is on the relegation list for now, and if they don't improve their form, they have a high chance of playing in League One next season. QPR is eleventh in the Championship table and they won or drew four out of their latest five games.

We don't believe that Rotherham will score any goals because, in their last ten games, they won only two, while in the rest of them the opponent got a clean sheet.

Four out of QPR's last five games ended with a total number of goals over 2.5, and the club have 2.4 average goals scored per match in the Championship. Rotherham also has the same average of goals for the whole Championship.

Recent Head-to-Head Data and Statistics for Rotherham vs QPR

Below, you can fact-check some of the data in our predictions, so you can see for yourself the statistics and make your conclusions. Also, find out what are the latest compared odds.

Rotherham doesn't have the best home-game record. In the last five games at home, they lost all of them, while QPR won or drew eight out of their last ten away games. QPR will most likely score more than 2.5 goals because, in their latest three victories in the Championship, all of them were with a total number of goals over 2.5, even their only loss against Nottingham ended with more than 2.5 goals scored.

Rotherham's defender Joe Mattock is out because of an ankle injury and it's questionable whether or not Robertson will play on Tuesday. QPR has three injured midfielders, including Thomas Carroll because of a ligament injury. Charlie Austin will also not play because of a three-game ban.

Both Rotherham and QPR have scorers with nine goals, but Michael Smith has three assists compared to Lyndon Dykes who only has one assist. 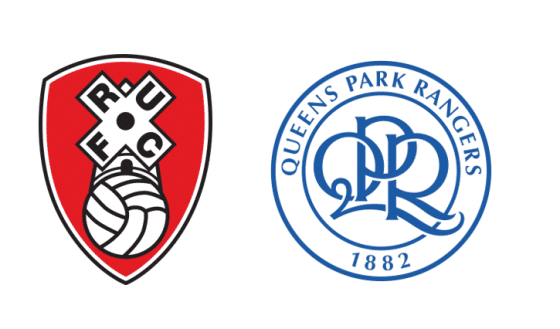 Questions & Answers About Rotherham vs QPR on Tuesday