Rotherham have won each of their last two games. Will they make it three wins on the spin here? Find out with our Rotherham vs Hull match preview with free tips, predictions and odds mentioned along the way.

Rotherham have a rather poor head to head record against Hull with the Tigers winning three of the last four meetings between the sides but we are backing them to end that run here by bagging victory. Rotherham have won each of their last two games and have notably lost just one of their last six at home. Hull meanwhile have lost three of their last five games and four of five when focussed on their away form. With the odds on offer from our preferred bookmaker considered as well, we see a Rotherham win as the value bet.

Next up we turn our focus to the total goals market and we are opting for under 2.5 goals. Rotherham have gone under the 2.5 marker in three of their last five matches with a game average of just 2.2 goals. Hull meanwhile have also seen three of their last five games go south of that 2.5 cut off. That gives both sides a 60% ‘under' ratio in recent weeks. When you consider that against the betting odds available from 888 Sport, the bet becomes more attractive than it might first appear.

Here are the key stats & form guide for Rotherham vs Hull

How are the relegation predictions shaping up?

Relegation was perhaps the word on the street for both of these teams prior to the season. Rotherham are currently in the top half with 21 points to effectively kill that chatter already but for Hull things are a little tighter. They've only got three points between them and the bottom three. Both will see this as a winnable game though so that should make it an interesting watch.

Rotherham have won each of their last two matches so you can basically forget any major changes to the XI that beat Stoke in the week. For housekeeping purposes though it's worth pointing out that Peter Kioso remains sidelined with an injury.

Hull have currently got quite the lengthy injury list with players such as Callum Elder, Benjamin Tetteh and Harvey Vale all included on that list. Those injuries are making life hard for the Tigers but they did at least produce the goods in midweek. With that in mind, we expect to see a similar lineup here.

A quickfire FAQ on Rotherham vs Hull 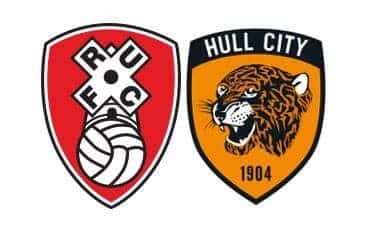