Scotland currently involved in two of the most important games in their history as a football nation.

The chance to get a chance to qualify for the 2018 World Cup in Russia was offered up in two games against Slovakia and Slovenia. Having won the first of these games, they now face Slovenia on Sunday in an attempt to secure a place in the play-offs.

Rangers don’t have any players currently involved in the national team squad, but that could change in the near future if one of their young defenders continues his current trajectory.

Ross McCrorie made his debut in the League Cup, coming on at half time in a 3-1 extra time win against Partick Thistle. Just days later he was making his first start for the club against none other than Celtic.

“For me Ross is going to be the future of this country, not only this club, as a centre-half,” said Rangers manager Pedro Caixinha after the Partick game.

“We are very glad to have him with us. We always knew what he was capable of, he's a humble guy, a hard worker and he'll keep doing his job.”

In another interview the Portuguese manager laid on the praise even more lavishly.

“Ross McCrorie is going to be one of the best centre halves in history, not just for this club but for this country. You just need to see what he did. He was brilliant. It’s not about age or names. It’s about getting the chance to prove it.”

Many reports had him down as one of the club’s best players in that game against Celtic, which they lost 2-0, and he then went on to play another 90-minutes in the subsequent league match against Hamilton Academical, which they won 4-1 away from home.

McCrorie has risen through the ranks at club and international level, and given his development it’s easy to see why his manager speaks so highly of him.

He’s recently captained the under-20 side at Ibrox, and this season he was always expected to make the step up to the first team at some point, but he perhaps didn’t expect to do so in such a high profile game as an Old Firm derby.

Now 19, the 6 ft 1ins defender has represented his country at youth level from under-17s and was expected to feature for the under-21 side during their games against Latvia and England

One of McCrorie’s strengths is his recovery defending, but the fact he has to do it suggests there are a few problems with his positioning.

However, when tracking back to tackle or recover from mistakes made by his team-mates, he invariably wins the ball. Granted some of the tackles fly close to the line but they are nearly always well executed. He also shows a decent amount of speed, which could be handy against a lot of the strikers he’s likely to face at the top level.

He can also hold his own when it comes to winning aerial duels, even though sometimes he can find himself on the wrong side of stronger centre forwards. There are taller defenders than him, but he can sometimes use his frame to navigate his way to the ball rather than always relying on height and strength.

As he enters his twenties his strength should increase further to help him in duels both on the ground and in the air, and more playing time at the top level will also help develop better positioning and keener anticipation.

His recent games for the first team have seen him operate on the left side of central defence. In this role the player often needs to use their left foot, and it's not something McCrorie is afraid to do, despite being right footed.

Some of his longer left footed passes can go astray, but when it comes to short passing out of defence he's competent with both feet.

It would be interesting to see him play on the right of defence, as he did while on loan at Dumbarton, where he will probably be more comfortable, but this time on the left will be good for his development and versatility further down the line.

Another aspect of his game is a willingness to break from the defensive line when his team is in possession. He laid on a good chance for Alfredo Morelos with a through-ball (left-footed) during the game against Hamilton, shown below. 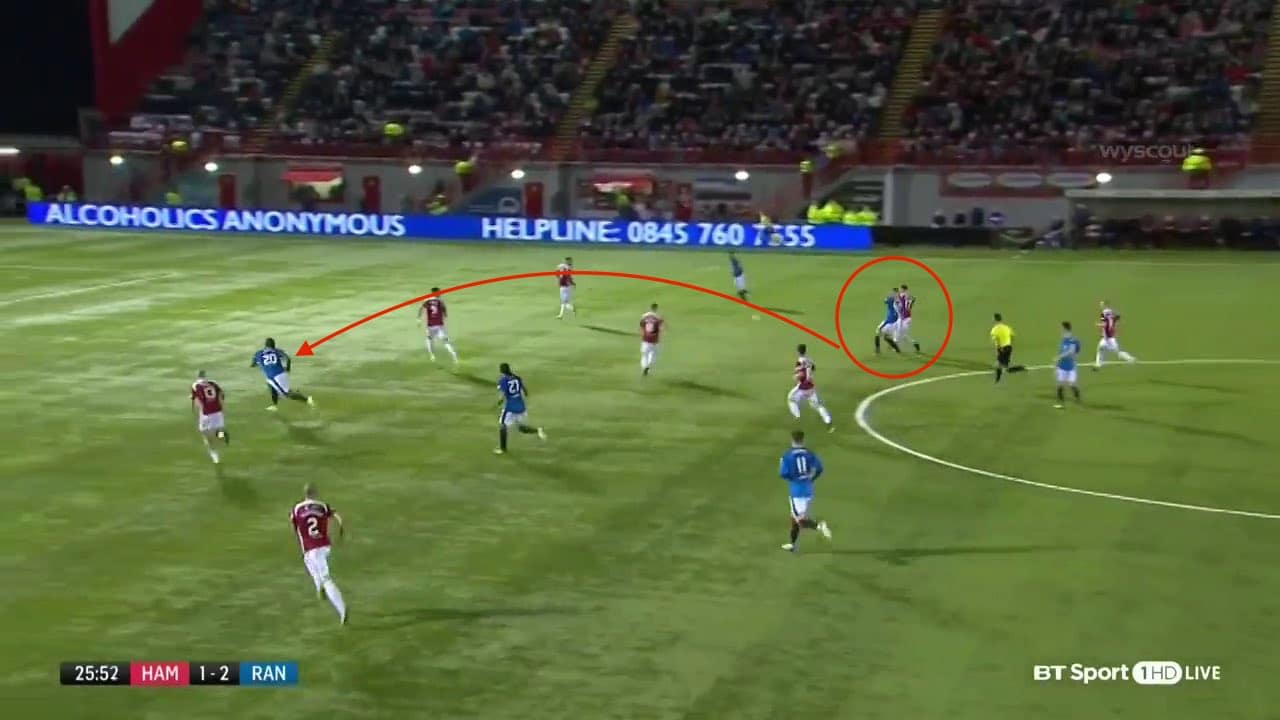 In a recent under-21 game against England he remained on the bench, but as Caixinha says, it might not be too long before he's challenging for a place in the senior side.

The Rangers manager also thinks that the young defender's appearance in the first time will encourage others in the club's youth sides that they can make the step up if they train well.

“I think Ross opened the door again for those players and understood the conversation we had with them at the beginning of the season, when we said, ‘we are having a look at you, keep working, we are going to call you when we have the need for players in your position because we know and we trust you, and if there are circumstances when we need to place you in the first eleven, or with the substitutes and give you the chance, we are going to give you it.’

“At the moment we don’t have it in a global way but we have it at least individually by the characteristics of the players and that’s what we are taking advantage of. We’ll give a chance to the players who have the potential to be with us.”

If this frame of mind continues, then it won't be long before there are a few more Rangers faces in the Scottish national team.