Neither of these sides have made a great start to life in Group C. A win for either team would change how the standings look though. Who will grab it? Find out with our Ross County vs Montrose match preview with free tips, predictions and odds mentioned along the way.

A win with breathing space?

Ross County might have won three of their last five matches but the two defeats they've suffered in this competition will be hurting them a little. They had a hard fought win last time out though and will see the visit of Montrose as the perfect opportunity to build up some further confidence; Montrose have only won one of their last five after all. Where the handicap element of -1 comes in is via the head to head; Ross County have won four of the last five meetings with three of them by a minimum of two goals. Given recent form, we've been slightly more conservative with just the -1.

Expect a lot of goals

The recent form of Montrose doesn't scream out that this match will have a minimum of four goals in it. Neither does Ross County's. Although, the latter have exceeded the 3.5 goals mark four times in their last 10 whilst a game average over that period of 3.2 isn't a million miles away. Again, look to the head to head record and you can see where the value in this bet is. The last four meetings between these two sides have served up a staggering 21 goals; that's nearly 5.3 per game. Each of those games have gone over 3.5.

A win for Ross County and goals galore

Our final prediction isn't quite a combination of the first two tips but does draw on a lot of the same logic. It's riskier in some ways – in that you need both components to happen – but safer in others in that we only need three goals and a Ross County win. Three of Ross County's last five wins would tick both these boxes as would two of Montrose's previous five losses. Then there is the head to head element again; three of the last four games between the teams would have seen this bet come in without much sweat.

Check out the recent form for Ross County vs Montrose

An exciting game, which Ross County will win

Both Ross County and Montrose have suffered results that they wouldn't have been overly happy with within their last five outings. That said, there has been a few positives for both sides as well. For Ross County they'll be saying that they've got the goals in their side to sweep Montrose aside; with Oliver Shaw at the sharp end of the pitch that's hard to argue with and he'll be keen to get amongst them here. Montrose meanwhile will be thinking they're good enough to cause some problems themselves. If they're to do that they'll need to get Mark Whatley influencing things in the middle of the park. 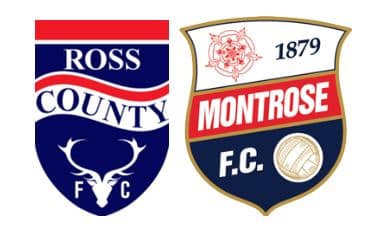