Ross Barkley has always had to deal with heightened expectation. He was dubbed the future of English football at just 17 years old; predicted to follow in the footsteps of Paul Gascoigne and Wayne Rooney.

“I have been lucky enough to have played with great players in my career but I do not think I have ever seen a talent like Ross,” Everton captain Tim Cahill said in June 2011, three months before the young midfielder would make his senior debut.

Barkley was a street footballer whose talents had been honed for the modern game. He mixed raw athleticism and confidence with exceptional technique and guile. His potential appeared limitless.

“Every club will want Ross Barkley because Ross Barkley is going to be an outstanding player,” David Moyes admitted as interest grew in the teenager weeks after he had made Premier League debut.

Yet there was no transfer. Barkley remained with Everton, loyal to the club he supported as a boy. Players moved on, managers arrived and left, but the Liverpool-born midfielder stayed. Was it a noble crusade? Not entirely. Stalled development, partly due to injury, almost certainly the reason he hadn't departed for pastures new.

To his credit – and much to Everton supporters' chagrin – Barkley realised he needed a move to kickstart his career. He refused to sign a new contract at Goodison Park amid interest from Tottenham Hotspur and Chelsea, who had first been linked with the midfielder in January 2011.

Seven years on, Barkley signed with the Blues for £15million. “I had never thought about leaving Everton over the years but it was getting to a point where I felt like I needed to make a move to improve as a player,” he admitted.

“Everton means the world to me. I am a boyhood fan, I am a local lad and have supported Everton all my life, it was a very hard decision but I felt it was right to make the jump to Chelsea.”

Plenty was expected of Barkley after his move from Goodison. His first six months were, however, instantly forgettable as he struggled for fitness after a long-term hamstring injury. His second campaign in West London entailed a job share with Mateo Kovačić in Maurizio Sarri's 4-3-3.

It's clear Barkley hasn't blossomed into the star many expected. There is still time for that to change, even at 25 years old. And Frank Lampard may have an instrumental role. 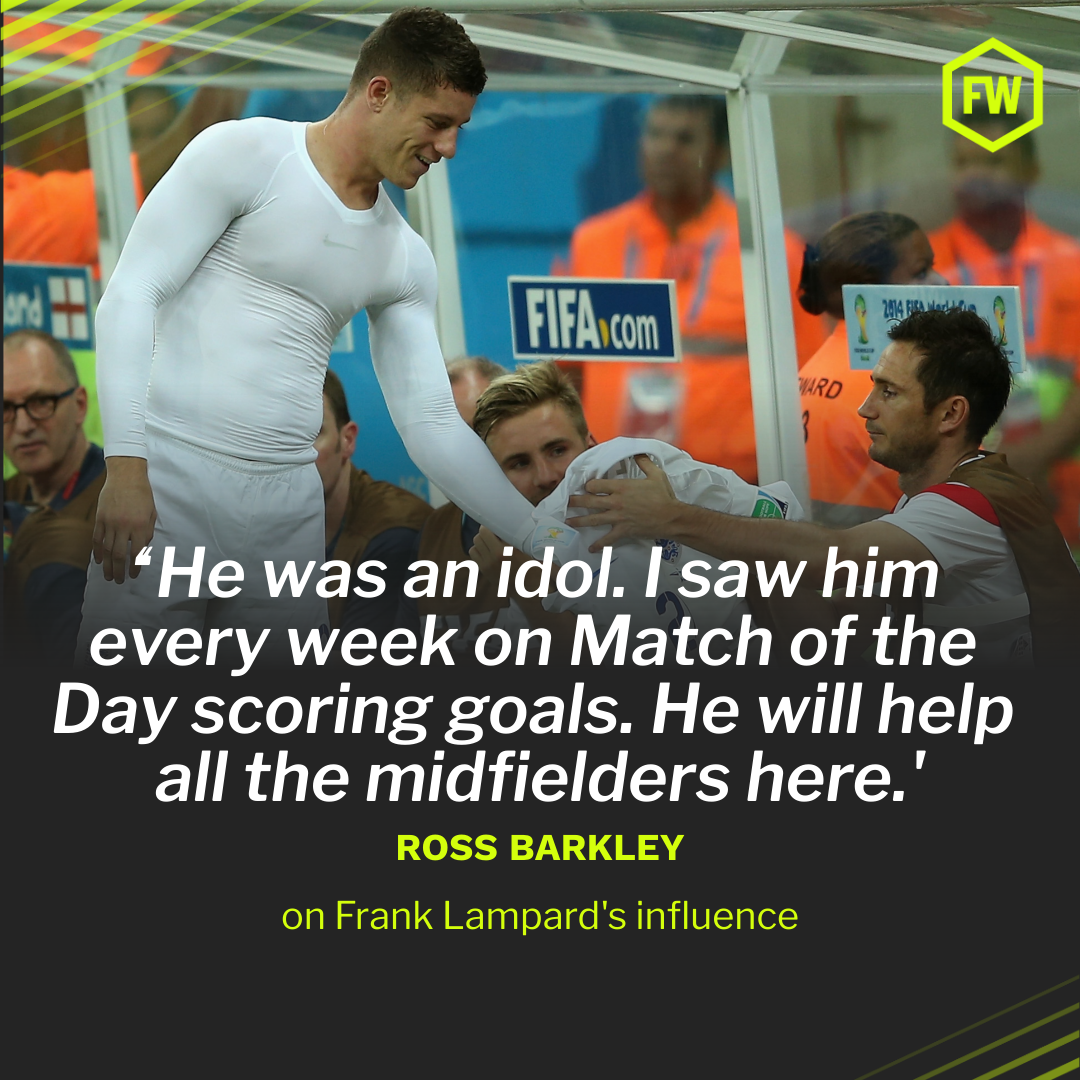 The Chelsea legend, now manager of the Blues, knows Barkley from their time with England. Lampard trained with the midfielder and travelled to a World Cup with him. He has an intimate knowledge of not only the player but also the person.

“He’s said to me in training; ‘express yourself on the pitch, take risks, don’t be too safe, shoot, try to create chances’,” Barkley explained after Chelsea's pre-season win at Reading.

“You don’t want to play in your shell as a player, you want to be playing off the cuff, take chances, make something happen.”

Predominantly deployed as the No.10 in Lampard's 4-2-3-1 or 4-4-2 diamond systems throughout pre-season, Barkley has been given freedom to create. And he's thrived.

He has struck three goals and claimed two assists in games against Barcelona, Reading and Red Bull Salzburg. His performance against the latter the standout.

Barkley scored from the penalty spot against the Austrian side, who have already begun their league season. But it was the goals he fashioned for Christian Pulisic and Pedro which caught the eye.

His pass for the American's second of the game was outstanding. A wonderfully flighted 50-yard ball which enabled the winger to go on and score without breaking stride.

The second #Goalisic from Christian was even better than the first. Barkley on another level with that pass. https://t.co/GtaHgIqu8a

And while Pedro rightly claimed the plaudits for his finish of Chelsea's fourth, Barkley's intelligent cross into the area shouldn't be overlooked. Nor should his all-round contribution.

At his best, the England international is an excellent ball carrier. He is able to brush aside opponents as he advances upfield, something which was evident against Salzburg.

Last season, though, he completed just 1.08 dribbles per 90 in the Premier League, a figure bettered by almost 50 top-flight midfielders.

That, in part, would have been because of the demands of Sarri, who favoured constant ball rotation. Yet his 1.23 open play key passes per 90 was outside the top 25 Premier League midfielders.

Barkley's position on the left of a midfield three also meant he had to be disciplined defensively, although his tackles won (0.79) and interceptions (0.65) were bettered by almost 100 of his peers.

Lampard has removed that responsibility and while he may have to rival Mason Mount for a regular starting berth, Barkley will have the perfect environment in which to flourish and perhaps fulfil those lofty expectations.