Thomas Lemar remains Arsène Wenger’s No.1 target this summer, with the left-footed Monaco star picked out as the man to improve the Arsenal attack.

Jean Michaël Seri of Nice, the energetic central midfielder, has also been mentioned as a possible recruit. He is available if a club meets his €40million release clause.

Both players would be ideal additions, improving the attack and giving them strength through the middle. But what if there was a player who could do both – someone with 150 games of Premier League experience, available for the right price.

Monaco want to hold on to Lemar. Vice-president Vadim Vasilyev, a wily, non-compromising character, broke silence this week to ward off advances for the 21-year-old and Brazilian midfielder Fabinho.

“I will also address speculation about Lemar: he is staying with us. We have discussed this,” said Vasilyev

He also reiterated their stance that former Paris Saint-Germain and Manchester United transfer target Fabinho would not be sold.

“Both these players have tremendous talent and are essential for our team. We must not await further departures, rather arrivals,” Vasilyev added.

Arsenal upped their deal to somewhere near the £70million mark, there was a chance.

“We made a really good offer to him to sign a new contract, he declined that contract and told me that he is looking for a new challenge,” said Everton boss Ronald Koeman when asked about the situation with Barkley.

“OK, he is not in Everton’s future any more. It is his decision. I need to respect that and see what happens. What I heard from the board at the moment is that there is no offer on the table for Ross.”

The Toffees have been clear with their stance, they want £50million for their 23-year-old and, at this stage, they are not willing to budge.

Barkley has been involved in 150 league games since making his Premier League debut in 2011 against Queens Park Rangers, contributing to 42 goals – equally split between goals and assists.

Throughout his career, he helps his team find the back of the net every 253 minutes. Over the last two campaigns, that has improved to 192 and 207 minutes.

Finishing with five goals and nine assists was a reasonable return from the midfielder and it’s certainly an area where Arsenal would benefit. Lemar contributed nine goals and 11 assists, that’s a goal every 130 minutes.

In a team that scored 107 times in Ligue 1, playing further forward and in a much more forward-thinking side, his better numbers would be expected, but there are definite similarities between the two players.

All too often, the north Londoners have lacked that player to drive the midfield forward, break the lines, support the attack and offer something different at both ends.

That is exemplified against West Ham, in a 2-0 win at Goodison Park, Barkley wins the ball back in his own half, then looks to spark a counter-attack.

Romelu Lukaku has made a run down the right-flank and the Everton No.8 picks him out with his right-foot. Not prepared to simply admnire at his work from a distance, he’s on his way into the Hammers' penalty area.

The big Belgian striker gets his head up and Barkley is there, unmarked at the back post, able to finish with his left foot.

Where the Everton midfielder edges out Arsenal's other targets is with the amount of shots he gets off – 2.7 per 90 minutes, compared to Lemar at 2.0 and Seri at 1.0. Away from Arsenal’s forward line, Aaron Ramsey averaged more with 3.1 last season, but no other midfielder came close.

Barkley completes more successful dribbles than Lemar and Seri and edges them in terms of key passes, with the 23-year-old managing 2.6 per 90. 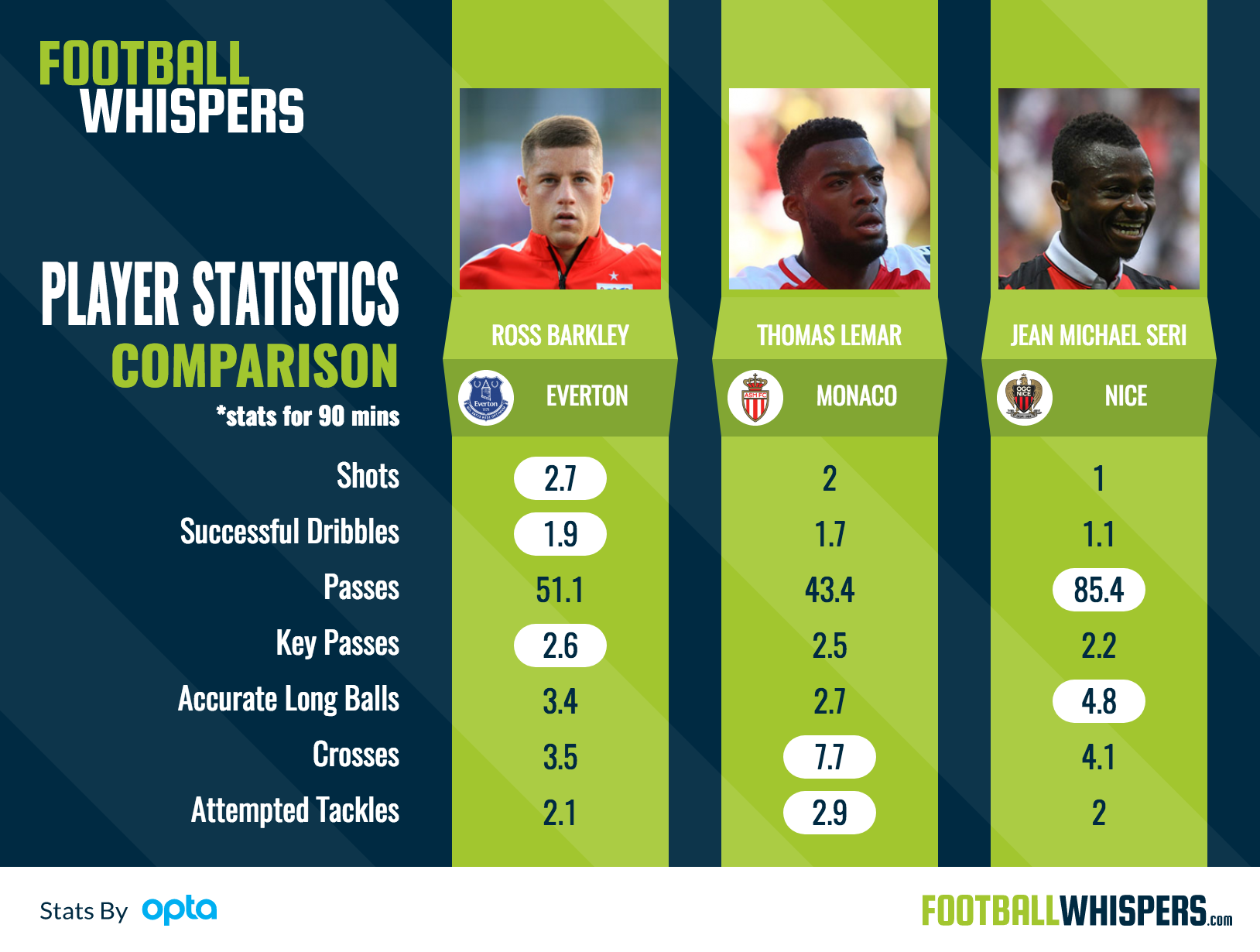 The France international makes more tackles and attempts more crosses but, in Monaco’s 4-4-2 formation, he had to cover Benjamin Mendy’s forward runs and as a wide player, you’d expect more long balls and passes from deep.

Barkley is a hybrid of the two. He displays similar midfield drive to Seri, desire to help his team win the ball back, push forward and pick out delicate and deadly passes beyond the defence.

Then, like Lemar, he is a threat in and around the final third. Able to pick a pass, but with a fire-cracker of a right-foot, able to test goalkeepers from distance.

In football, especially for a club like Arsenal, possessing that ability to create something from nothing can be priceless. All Barkley needs is a half-yard of space and time and he can punish you.

Playing against Leicester City last season, the England international received a pass from Idrissa Gueye on the right-flank. 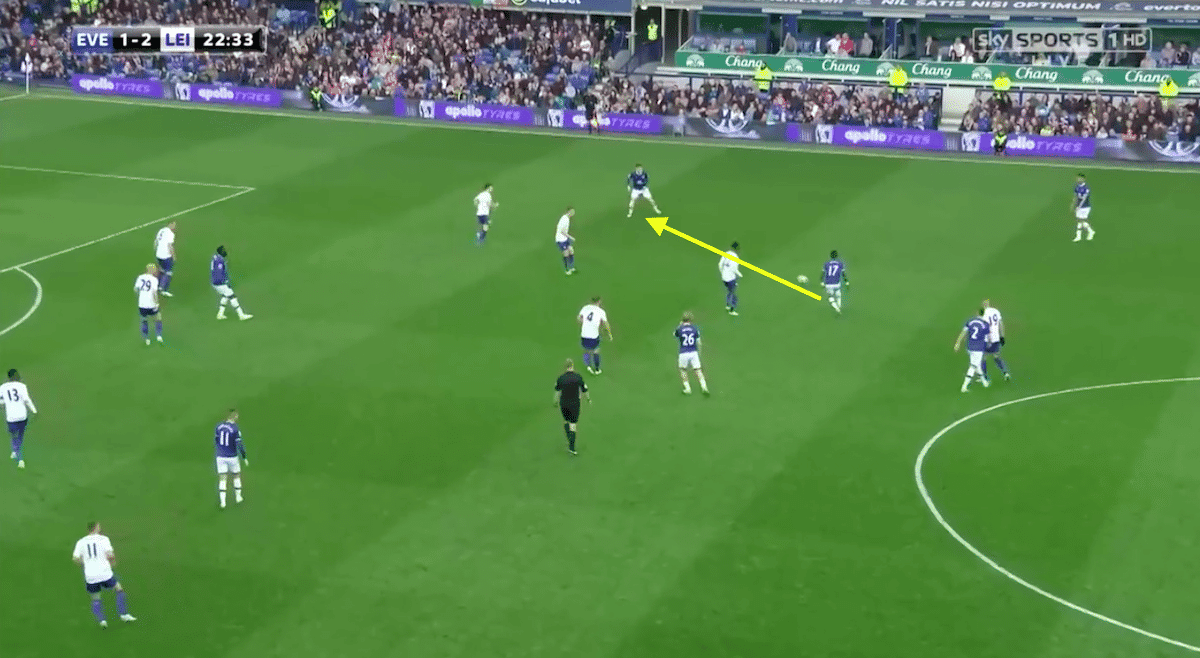 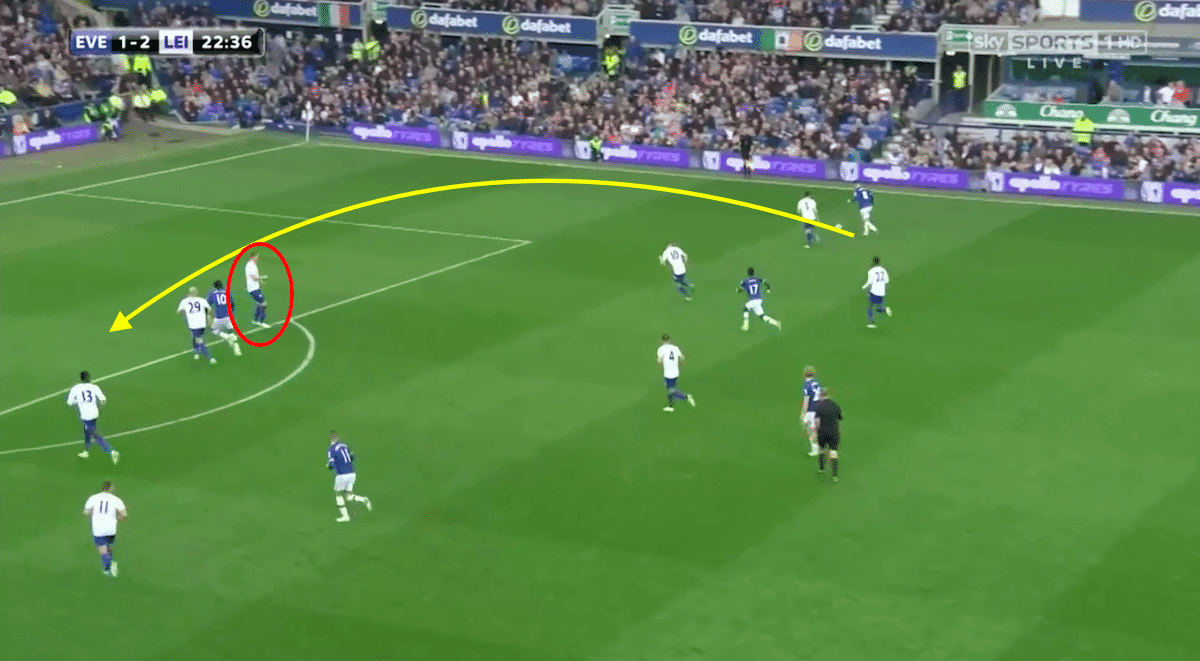 With the defender fairly close to his man, the cross doesn’t look likely. You can see by Robert Huth’s poor body position the Foxes' back-line are not ready. Lukaku is though. He knows what Barkley’s right foot can do and starts to make his run. 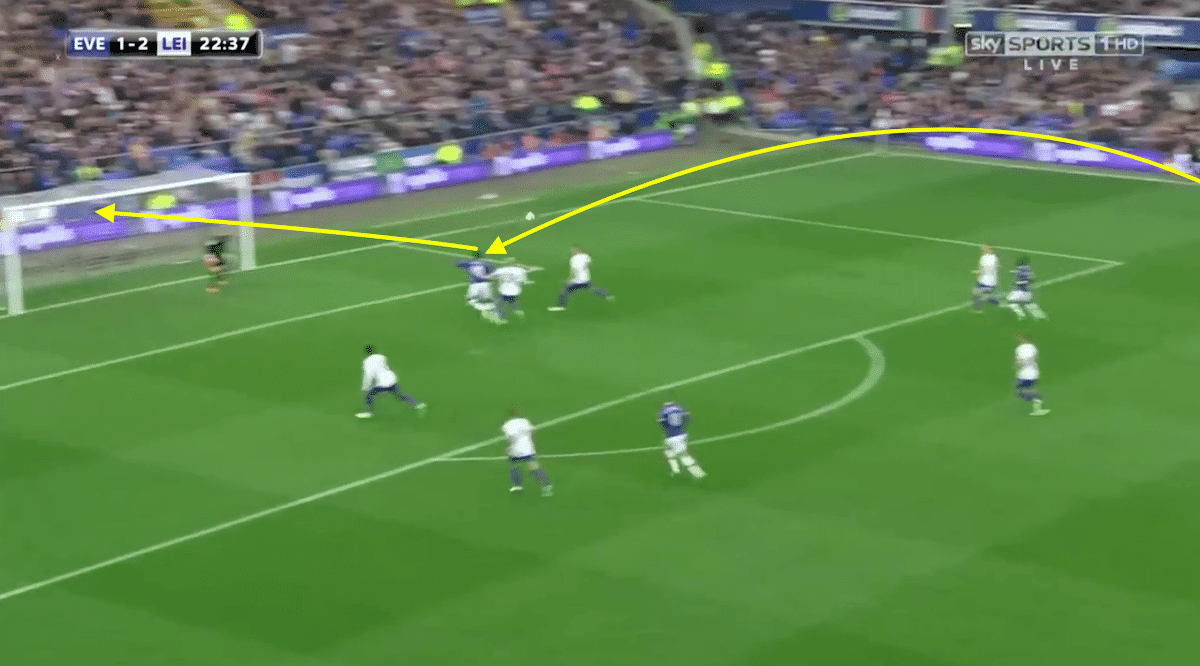 Pin-point perfect, the new Manchester United forward meets the delivery and equalises. All it takes is a momentary lapse in concentration. Barkley has the quality to punish you.

If Arsenal were willing to go above £45million for Lemar and perhaps also add Seri to the squad for £37million, why not go for the British option? Add an experienced international midfielder to the starting XI and in turn give the Gunners a versatile option.

Barkley could play on the left or right of the front three. He could play as the No.10 and in either of the two central midfield positions. Rather than buying two Ligue 1 players, you could buy someone who is able to do both.

Barkley’s potential, although still only 23, remains unfulfilled. But there is still time. However, there would be scruting on Wenger too. Across north London, Mauricio Pochettino – also linked with signing the midfielder – has cultivated a young team, getting the best out of Dele Alli.

Arsenal, through Theo Walcott, Jack Wilshere, and Alex Oxlade-Chamberlain, have tried to do the same. But the trio are yet to reach the expectations pinned to them.

Barkley’s success could be the French boss' last chance to bring the best out of English talent. Le Professor said he wanted to not only rebuild his team, but continue to learn and develop as a coach.

This could be his chance. Transform Barkley into a successful £50million signing and it could be one of the last, if not one of the best, masterstrokes of Wenger’s career.