It was just days before England's World Cup campaign that Danny Rose spoke with raw, unflinching honesty about the difficulties he'd faced, and ultimately overcome, during the 2017/18 season.

“It’s no secret that I’ve been through a testing time at Tottenham,” he said.

“It led to me seeing a psychologist and I was diagnosed with depression, which nobody knows about. I had to get away from Tottenham.

“I’m lucky that England gave me that opportunity to get away, refresh my mind and I’ll always be grateful to them. I was on medication for a few months – nobody knows about that apart from my agent – but I’m off the medication now.”

Incidents in his personal life played their part in Rose's depression but he identified a knee injury sustained in January 2017 was the beginning of his strife.

At that point there were few better defenders in the Premier League than Rose. His pace, power and intelligence, both in defence and attack, made him a fearsome full-back, one who was courted by Manchester United and Manchester City.

The diagnosis of his injury was that surgery wasn't required. But when he returned to training in May, he was still suffering from pain in his knee. On this occasion surgery was recommended.

Rose ended up missing eight months of football, towards the end of which he gave an unsanctioned bombshell interview with a national newspaper. The then 27-year-old criticised Spurs' transfer policy and also stated he wanted to be paid what he felt he was worth.

Shortly after the interview was published, Rose released a statement apologising for his remarks. Mauricio Pochettino, Spurs' manager, accepted it, both privately and publicly, and drew a line under the incident.

Yet Rose would only go on to make ten Premier League appearances last term as he fell behind Ben Davies in the pecking order at the North London side. Speculation that he could depart this summer came as little surprise.

Instead he remained at White Hart Lane. Given his recent form Tottenham were certainly wise to keep him.

After missing the first game of the Premier League season, away to Newcastle United, and then sitting on the bench for the second, a home win over Fulham, Rose was tossed back into action against Manchester United at Old Trafford.

Was it a mark of Pochettino's trust in the player? Perhaps. Only the Argentine knows. But, while Rose looked a little rusty, especially in the opening 45 minutes, he played his part as Spurs clinched a memorable 3-0 victory.

“To put me into such a massive game, a game where he didn't need to change anything…for me, over the last four or five years we've worked together, that is probably the biggest thing he has done for me,” Rose said after the win.

Rose was a late substitute the following weekend as Spurs fell to defeat to Watford but featured for England twice during the subsequent international break and has started the last three Premier League fixtures.

Tellingly, against Brighton & Hove Albion and against Huddersfield Town at the weekend, Rose claimed assists, although many felt he dived to win the penalty from which Harry Kane scored against the Terriers.

But his match sharpness has returned and he is able to make lung-busting, decisive runs forward without neglecting his defensive responsibility, as the graphic below shows. 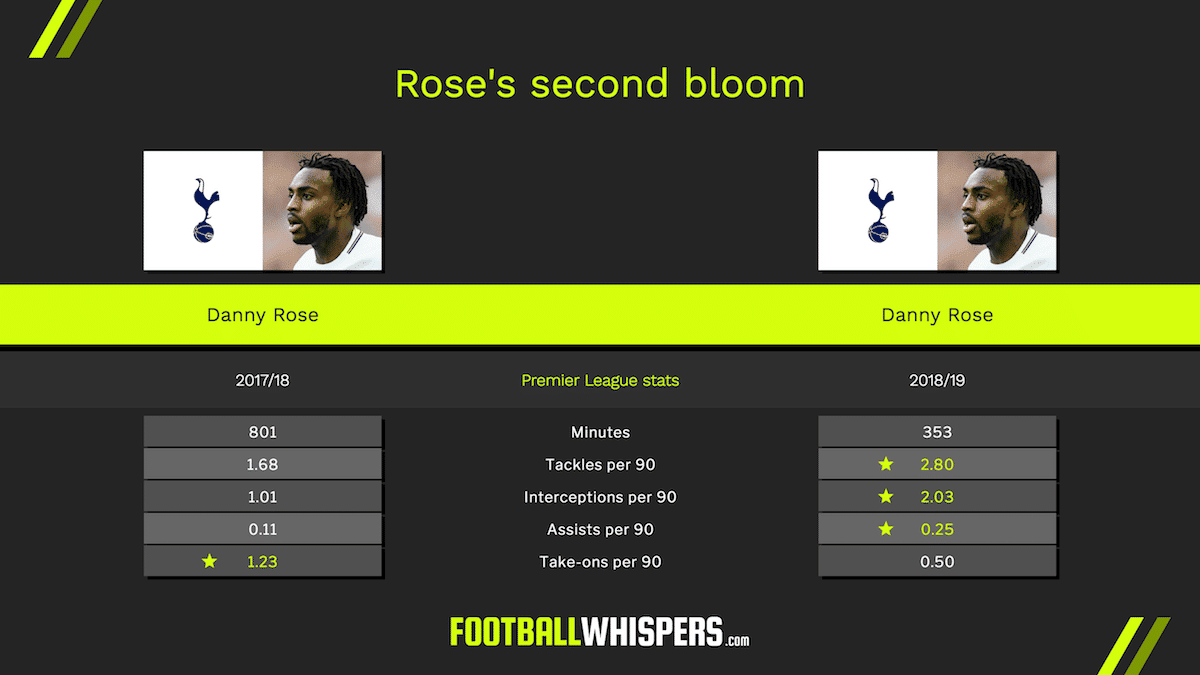 The sample size from this season is small but the numbers above are certainly encouraging.

So is the fact that the former Leeds United youngster is playing more forward passes this term compared to last, with 49.6 per cent of his passes advancing play rather than just 42.8 per cent last term.

So the signs are promising. The key for Rose now will be to stay fit for a prolonged spell and then dislodge Davies from the starting XI entirely; the Wales full-back still started in San Siro for Tottenham against Inter Milan in their Champions League opener.

Achieve that and Rose will likely be back to his best, something few could begrudge him.