Wayne Rooney was meant to be finished. The former Manchester United captain’s return to Everton in the summer seemed purely a romantic move, it was unlikely he would actually be able to offer his hometown club anything substantial.

Many had expected the former England captain to end his career in a far-flung foreign league rather than trying to get back up to the elite level of his Premier League heyday.

Former United legend Teddy Sheringham wrote him off in the summer – before he made the move to Goodison – saying he expected the striker to go to China.

A move to the Far East is seen by many as equivalent to an early retirement, and that implies he'd written Rooney off.

“Everyone has to understand that at some stage in your career you go up, and up and up, and then come down the other side.

“But the way he’s coming down the other side with Jose, he’s jumped off the cliff and is down the bottom,” said Sheringham.

“It’s a shame, he started early at 16 and has had a fantastic career, but I think it’s time to go somewhere else and enjoy his football elsewhere.”

That elsewhere clearly wasn’t meant to be Everton, but Rooney is rolling back the years at Goodison Park.

There is life in the old dog yet.

Back among the Premier League’s best?

Rooney has already bettered the total number of league goals he scored in a single season during his first spell at Everton – he's found the back of the net on ten occasions so far in the Premier League.

That figure is also more than he managed in his last two campaigns at Manchester United. In 2015/16, he struck eight in 28 Premier League games while he scored five in 25 in 2016/17.

Impressively, if you combine his goals and two assists in the top flight this season, Rooney has been involved directly in 12 Everton goals in the league, one every 103.4 minutes.

Excluding players that are yet to reach 1000 minutes of league action this term, that puts the 32-year-old sixth in the list of goals contributed to per 90 minutes.

Not bad company to be in at all, especially given he's been playing for a team that spent the first three months of the season in complete disarray.

Rooney is also some distance ahead of his nearest Everton team-mate, Dominic Calvert-Lewin, who has been directly involved in a goal once every 187.1 mins.

And as the only player outside of a top-four club in the list, it shows the heights Rooney has hit this term.

The biggest increase in Rooney’s output is two fold. He is playing more and scoring more, hardly a coincidence.

This season he’s played 1243 minutes in the Premier League and we’re not even in January. In 2016/17 at Manchester United, he featured for just 1540 minutes in total in the league. 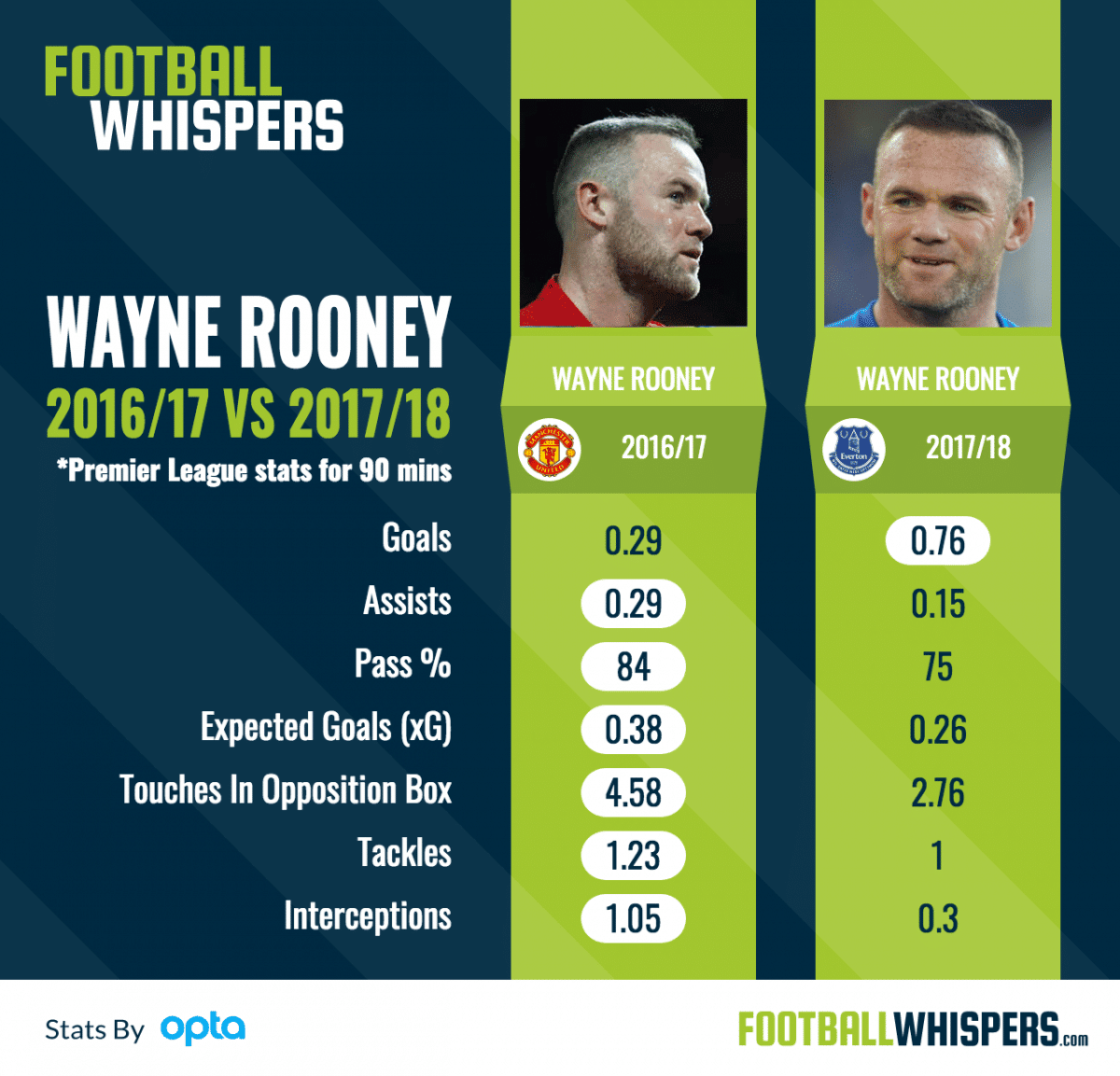 Interestingly, however, in every other area, his stats have dipped compared to his final campaign at Old Trafford.

It is notable pointing out though that he is outperforming his xG this season, so when a chance does arrive, he is being more clinical.

Also, Rooney is playing slightly further up the pitch than he did last season. José Mourinho often used the striker in a midfield role and while he has occupied the centre of the pitch for the Toffees, he has generally been used as a support striker or line leader.

That means he is having less of the ball and is taking more risks with it, which explains why his passing accuracy has dropped significantly.

Rooney is also making fewer tackles and interceptions than during the 2017/18 season, quite simply he has been freed of defensive responsibility and has been allowed to get on with what made him such an exciting player in the first place; scoring goals.

After his strike against Swansea, which came from the penalty spot, Rooney has netted three goals in his last three games. He also has two assists in those matches, so Sam Allardyce is getting the best out of England's all-time leading scorer.

Unless you're an ardent Liverpool fan, or perhaps maybe a Manchester City supporter, it's hard not to enjoy seeing Rooney making a decisive impact in the Premier League once again.

He is one of the division's all-time great players, a footballer who combined technical excellence with sheer brute strength and determination.

And while he may not be the dominant force of old, it's clear that in the right environment he remains one of the Premier League's most effective stars.