This Real Madrid side will go down in history, there is no doubt about that.

Indeed, they are the first team to win Europe’s elite competition in two consecutive seasons since it has become the Champions League.

It may not be a coincidence that these four successive seasons have been since Gareth Bale’s arrival for a fee that was then the world record, but the star of the side is undeniably Cristiano Ronaldo.

And his double against Juventus underlined his status as Real Madrid’s greatest ever player.

Juventus had conceded just three goals throughout the entirety of their run to the Champions League final.

Against Real Madrid, they conceded four, with Ronaldo scoring two of them.

This entire Champions League campaign has seen the Portuguese superstar prove himself as man for the big occasion.

The 32-year-old was just a goal away from scoring a hat-trick in the quarter final, the semi final and the final itself.

And he gave a man of the match performance on Saturday.

Football Whispers’ Tom Bodell gave him 9.5 out of 10 in his player ratings after the Champions League final.

“Ronaldo had been quiet, almost eerily so, in the opening 20 minutes. Then, just as Juventus had been lulled into a false sense of security, the Portuguese met Dani Carvajal’s pull-back from the right to tuck home his 104th Champions League goal, becoming the first player in the Champions League era to score in three rivals.

“He almost disappeared from view again until the 64th minute, ghosting in behind Leonardo Bonucci to score the killer third. A hat-trick just eluded him but this was another Ronaldo final.”

It was indeed another Ronaldo final.

It was all about him. 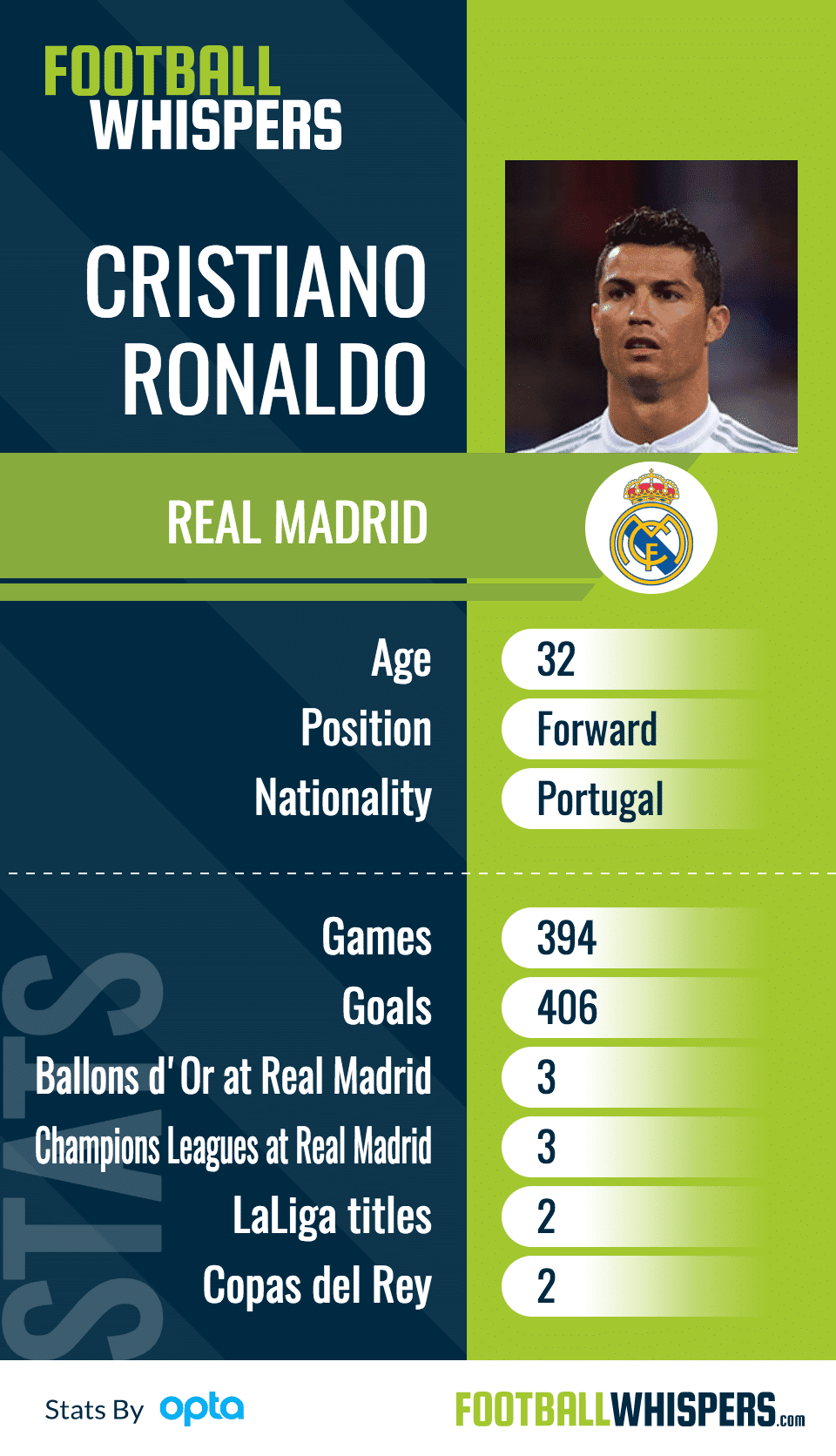 When the team need someone, they look to either him or captain fantastic Sergio Ramos to dig them out of a hole.

And more than often they have done.

In fact, for the six seasons before the 2016/17 campaign, the Portuguese star had finished with 50 or more goals by the end of each season.

This season, on a personal level, has been his worse since his debut season at Madrid in terms of goalscoring, where he got 33 in 35 appearances.

But perhaps, it will be remembered as his greatest ever season at Real Madrid for the way their talisman helped them win the double.

And it will surely help him to his fifth Ballon d’Or title – his fourth at Real Madrid.

Currently only Lionel Messi has five, just underlying how good the pair are.

If Messi wasn’t around, Ronaldo would have undoubtedly won more – and vice versa.

His statistics are simply stunning.

To put that goal haul into perspective, Messi has scored 94 times in the competition and the legendary Raúl is way back on 71 in third.

No other player has more than 56.

What’s more, it is worth noting Ronaldo had to wait 26 matches before scoring his first Champions League goal – and since he joined Los Blancos from Manchester United, he's scored 90 in 88 appearances, an incredible record.

His opener against Juventus also meant he became the first player in history to net in three different Champions League finals, adding to his strikes for United in 2008 and Madrid in 2014.

Ronaldo's second of the game then took him clear of Messi at the top of the scoring standings for this season.

His 12 goals in the 2016/17 Champions League mean that he has finished top scorer in Europe's elite club contest five years running.

And at the moment, he can’t stop hitting landmarks.

Ronaldo’s 61 goals in the 2014/15 season is the highest ever for the club and his second against Juventus was also his 600th for club and country.

Incredible for a man who at 32 looked like he could slow down.

But he’s been reinvented as a centre-forward thanks to Zinédine Zidane’s clever management, both letting him change position and agreeing with him that he needed to be rested.

In fact from the away game versus Athletic Club on March 18 until the win at Celta Vigo to all but secure the title on May 17, the Portuguese superstar didn’t leave Madrid for a LaLiga fixture.

He only left the capital once for his club side in that time given that the Champions League semi against Atlético Madrid was in the city – for the away fixture against Bayern Munich.

Indeed, after the final, he had a message for his critics.

“This is one of the best moments of my career but it seems I am able to say that every year,” he said.

“People won't be able to criticise me because the numbers don't lie.”

He doesn’t look like he is anywhere near retirement, and perhaps he has got Di Stéfano’s European Cup final record in his sights.

By scoring in five different finals, he’s the only player to have scored in more different European Cup finals than Ronaldo and the Portuguese superstar will surely want that so there is no doubt at all he is the greatest Real Madrid player of all time.