On the face of it, Celtic's 3-0 Champions League defeat to Bayern Munich on Wednesday night was just another humbling night at the hands of a European heavyweight.

After being mercilessly put to the sword by Paris Saint-Germain, suffering their heaviest home defeat in Europe, Brendan Rodgers' Scottish champions found themselves up against a resurgent Bayern, a quick-passing, hard-pressing machine skilfully reassembled by Jupp Heynckes.

Thomas Müller, Joshua Kimmich and Mats Hummels all scored for the Bundesliga champions as they moved three points clear of Celtic in the group.

Thiago Alcántara was a string-pulling maestro in midfield, Kingsley Coman looked sharp and Arjen Robben was typically devastating on the wing, giving young left-back Kieran Tierney the runaround in the Allianz Arena.

However, while it was a defeat, Rodgers and his players can certainly reflect on their performance with a certain degree of pride and encouragement. Nobody can legitimately criticise Rodgers for a tactical blunder or anything of that nature: Bayern were simply too good.

Celtic did not sacrifice their stylistic principles, though. Under Rodgers in the SPL, they have established themselves as not only the best side in the league but the most technically proficient and aesthetically pleasing. Rodgers demands a smart passing game and, while they found it tough to execute such a philosophy against the Bavarian giants, it wasn't for a want of trying.

In fact, Celtic actually played a bit, especially in the second half. The introductions of Moussa Dembélé and Tom Rogic after 65 minutes seemed to lift the Glasgow club and will perhaps give Rodgers food for thought when it comes to picking his starting line-up for the return game at Celtic Park on Halloween night.

DEMBÉLÉ AND ROGIC MADE A DIFFERENCE

While Stuart Armstrong and Leigh Griffiths did little wrong – although the latter was predictably isolated up top as Bayern controlled the game – Dembélé and Rogic offered Celtic a different dimension going forward after coming on.

While you could perhaps say that Bayern, 3-0 and cruising towards three points, had taken their foot off the gas, the pair definitely made an impression, while James Forrest also made a noticeable impact after replacing Patrick Roberts in the 78th minute.

Only three minutes after Rogic and Dembélé entered the action, Celtic had a controlled spell of possession where they looked comfortable and composed, despite having taken something of a battering in the first half. It almost created a wonderful goalscoring chance for their talented Frenchman, too, as you can see below.

As you can see below, the 21-year-old was willing to move in behind the Bayern defence and offer Celtic a genuine focal point in attack.

After promising build-up, Tierney was able to find space on the left. Spotting the run of Dembélé, he whipped a cross in which would have found his teammate six yards out had it not been for Jérôme Boateng's positioning. 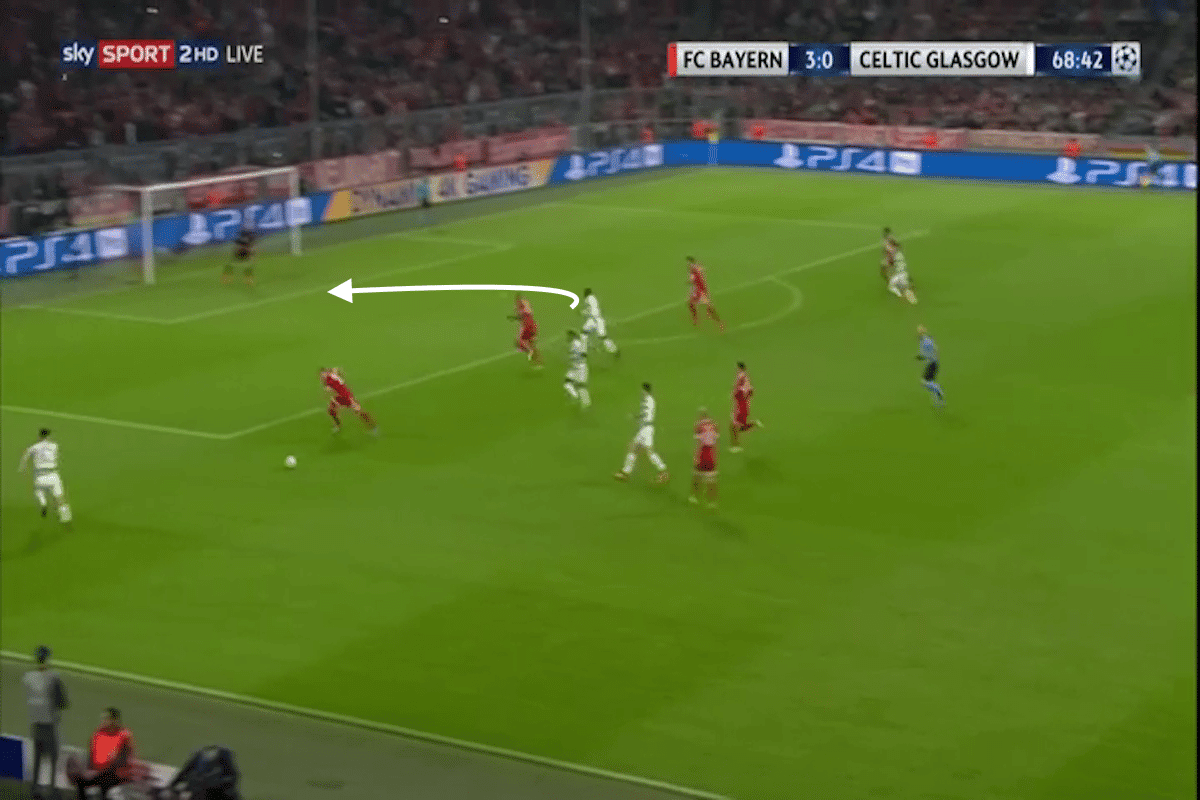 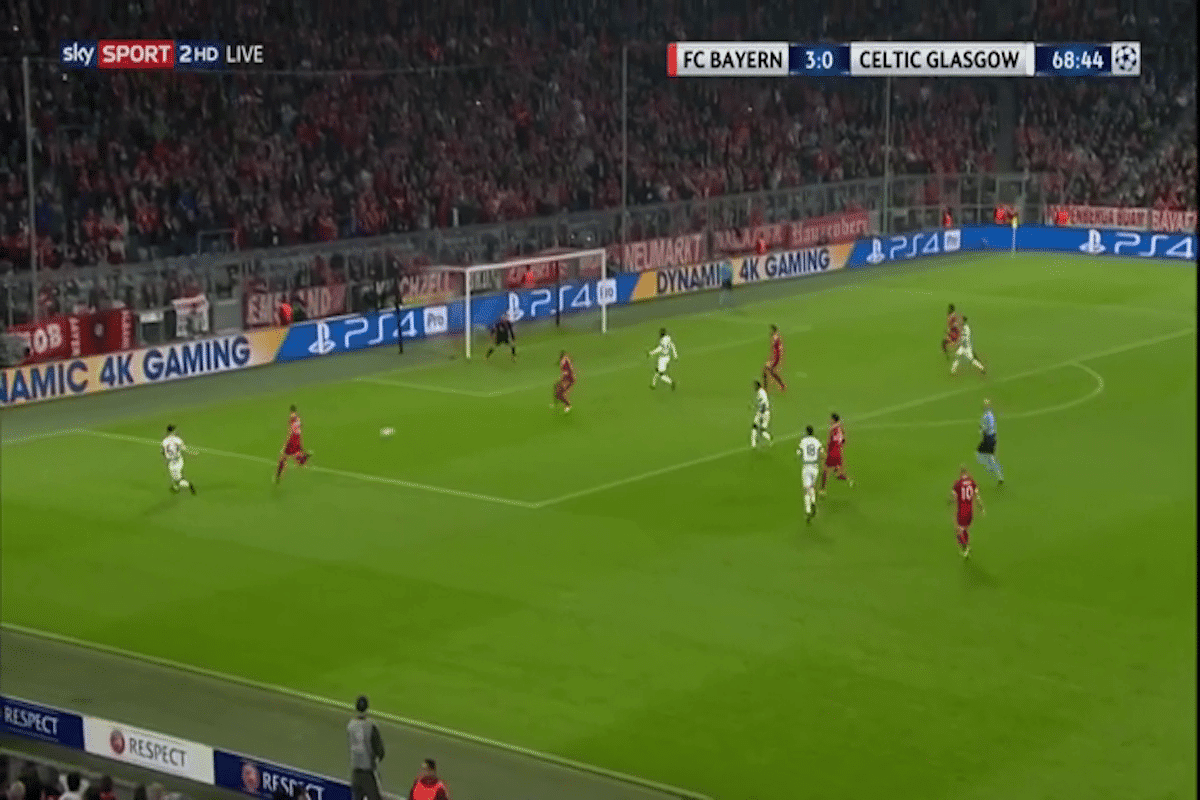 Although Griffiths is a superb striker in his own right, he lacked that bit of instinct against Bayern, and Dembélé's introduction gave the Hoops a renewed sense of purpose and direction in attack.

Rogic played a part in that, too. The 24-year-old Australian, who perhaps would have been frustrated not to start (Dembélé is still building his fitness after an injury), helped Celtic look more menacing and incisive going forward.

In the screenshot below, captured just after Rogic receiving the ball from Tierney, shows a more enterprising edge to Celtic's play. Rogic plays an incisive pass into Dembélé, who has the confidence to suck Kimmich towards him, which leaves Scott Sinclair free on the edge of the area. The Frenchman also has the skill to turn the Bayern right-back. It creates the situation for either him or Sinclair to have a shot. 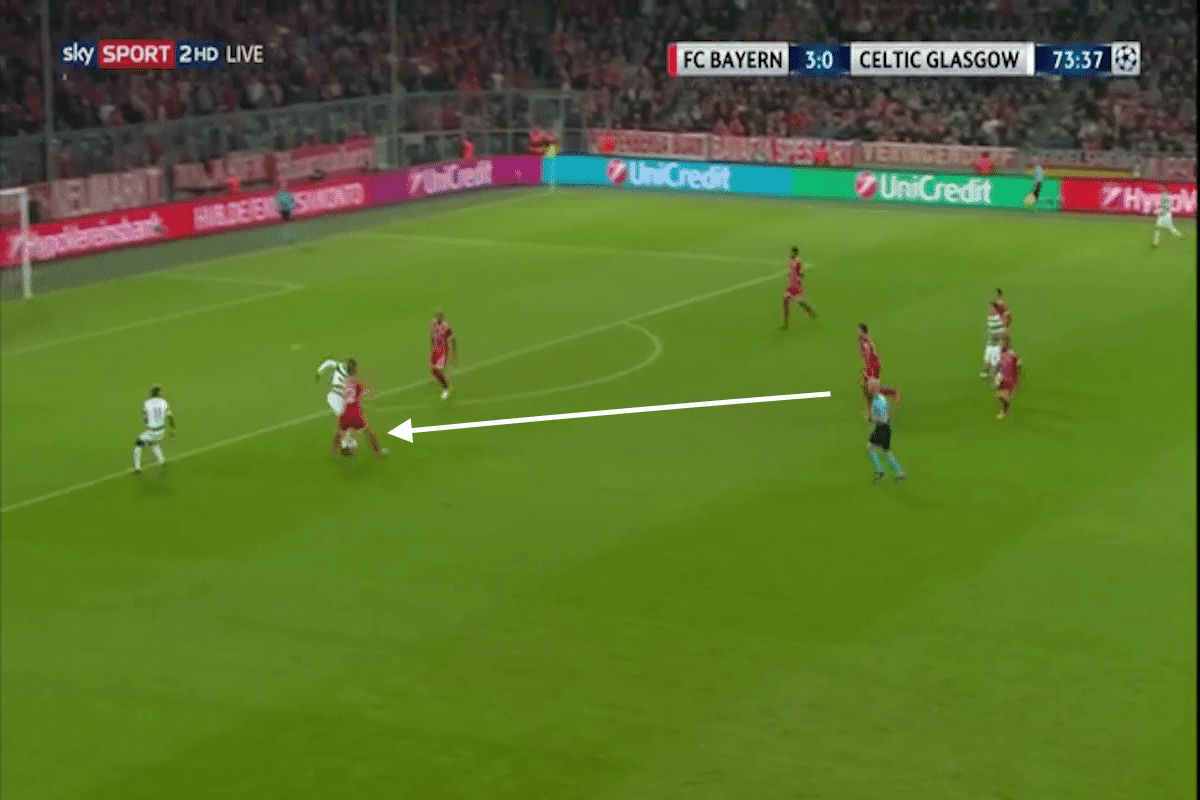 Sinclair forces a save from Sven Ulreich and Rogic, following up on the edge of the box like attacking midfielders should, forces the keeper into another fine stop. This is what the mercurial playmaker offers Celtic over the dogged industry and graft of Armstrong. Rodgers has plumped for the latter against PSG and Bayern, but perhaps Rogic deserves another chance despite not having his best game in the win away at Anderlecht.

But Rogic certainly has the mettle to rise to these big occasions. He scored a last-gasp, treble-clinching winner in the Scottish Cup final Aberdeen last season and also scored against Rangers in the Old Firm in September.

There is a sense that Celtic will continue to attempt their aggressive, adventurous style of football. Rodgers was quick to point out after the game that Barcelona put seven past his side last season when they tried to park the bus.

“This is an incredibly honest group of players and they give everything,” Rodgers said.

“Technically they’ve shown they’re good enough to do it. Tactically they also got in good positions. But then you have to have the nerve. You need the nerve to play. The game now, the modern game, is moving away because of finances.

“For us, we want to be competitive and to do that we have to find a way, a different way. That’s through an ideal of playing as a collective. It’s about breeding that and growing that.

But, listen, there is no shame in coming to the Allianz and losing 3-0. We had some chances and when you look at the goals we conceded they were disappointing.”

With Rodgers and Celtic committed to an attacking plan, he will require the personnel at his disposal who can unlock defences and move defenders. That's what Rogic and Dembélé offer, and that's why they need to be in the starting line-up when Bayern come to Glasgow in two weeks' time.