Bayern Munich‘s shock summer signing of James Rodríguez on loan from Real Madrid was initially seen as an attempt to please Carlo Ancelotti, who was supposed to take the Bavarians to Champions League glory – something Pep Guardiola was never able to do.

While everyone agreed securing the Colombian’s services on loan for two years for €13 million was a steal, there were questions asked as to why his value had dropped from the €70-80 million Madrid were demanding to the €42 million that Bayern would pay to make the deal permanent.

There were also internal concerns about him taking the place of one of Thomas Müller, Arjen Robben or Franck Ribéry in the attacking trio behind

Still, the masterplan was for Ancelotti to reunite with Rodríguez who had enjoyed his best football during a challenging three-year spell in Madrid under the Italian.

Despite winning the Bundesliga in his first season at the Allianz Arena and enjoying a positive relationship on the surface, troubles began for Ancelotti after a series of embarrassing pre-season losses in China.

The impressive start made by Peter Bosz’s Borussia Dortmund was exacerbated by fallings out with Ribéry and Robben, overusing Lewandowski, talk of a lack of focus on tactics and, more importantly, heavy defeats to Hoffenheim and Paris Saint-Germain in the Champions League which led to his sacking.

Ironically, Rodríguez, the player who was supposed to help Ancelotti take Bayern to the next level, played the full 90 just once during the Italian’s tenure, in a convincing 3-0 win over Schalke.

How Heynckes took Rodríguez to next level

Given the success Jupp Heynckes has had since succeeding Ancelotti as Bayern boss, losing just once in 25 games and guiding the Bavarians to the Bundesliga summit, those concerns over Bayern’s early struggles seem laughable now.

Much like the Bundesliga season itself, the narrative that Rodríguez would flourish under Ancelotti was also hijacked by Heynckes. During the 14-game run from the end of October to early February in which Bayern won 13 and lost just once, Rodríguez, who had missed five of the first eight games for Bayern, started all but two games.

Even with the Colombian rested for the 5-2 revenge victory over Hoffenheim, Heynckes’ Bayern racked up 39 points from a possible 42 while recording a goal difference of 22 and a non-penalty xG difference of 16.77 to restore their dominance in the Bundesliga – and some of their pride by beating PSG 3-1 in the reverse fixture in the Champions League.

Heynckes, whose Spanish is excellent after a decade coaching Real Madrid, Athletic Bilbao and Tenerife, has been able to integrate Rodríguez into Bayern’s squad by deploying him deeper in midfield.

The passing maps of 11tegen11 (below) show this. Just observe Rodríguez's domination of the ball in central midfield against Beşiktaş in the 5-0 first-leg win, compared to playing just behind Lewandowski earlier under Ancelotti in the PSG debacle.

The veteran German coach was one of the earliest proponents of gegenpressing – made famous by Jürgen Klopp – and Rodríguez has taken to this idea rather well. An average of 2.2 successful tackles per 90 is a career best, while the 0.9 times per 90 he is dribbled past is also the lowest of his career to date.

In the still below, taken from Bayern's Champions League rout of Beşiktaş, Rodríguez wins the ball back with a sliding tackle on the edge of the visitors' penalty area, putting Barcelona transfer target David Alaba in a great position. 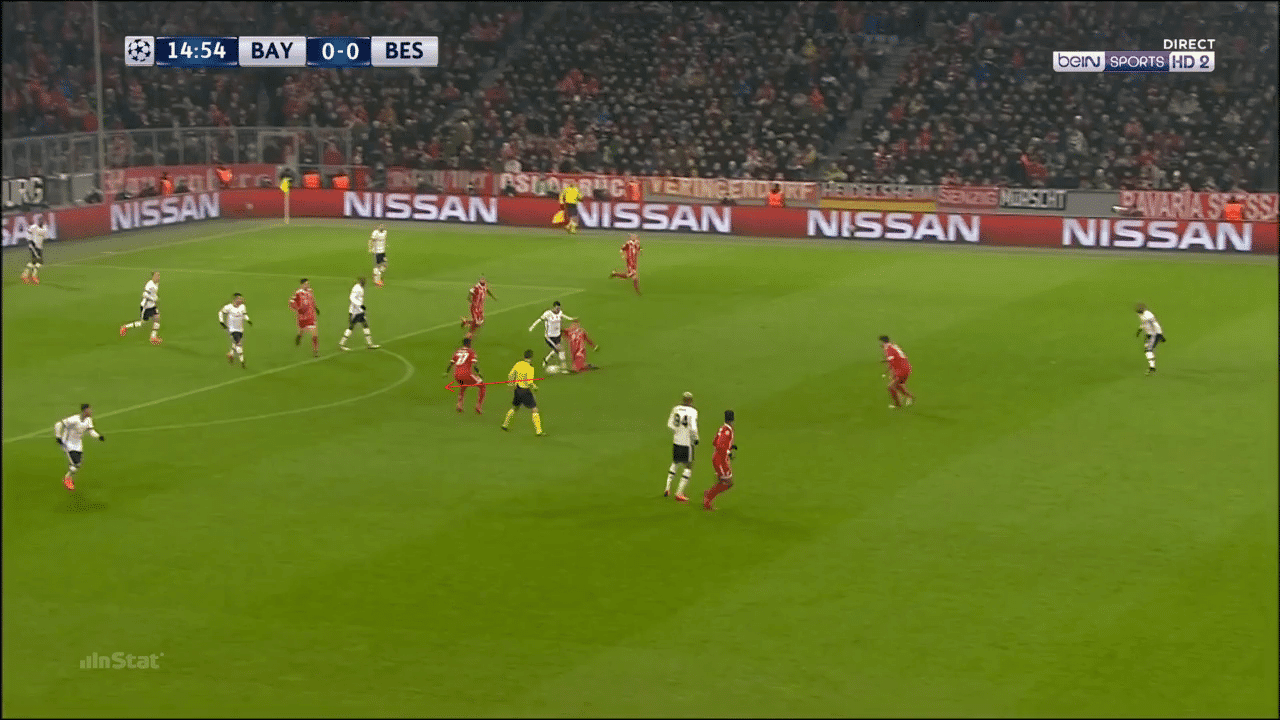 In the next example, taken from Die Roten's clash with Mainz, Rodríguez pokes the ball from the unsuspecting Mainz dribbler Levin Öztunali and puts Tolisso in position to attack. 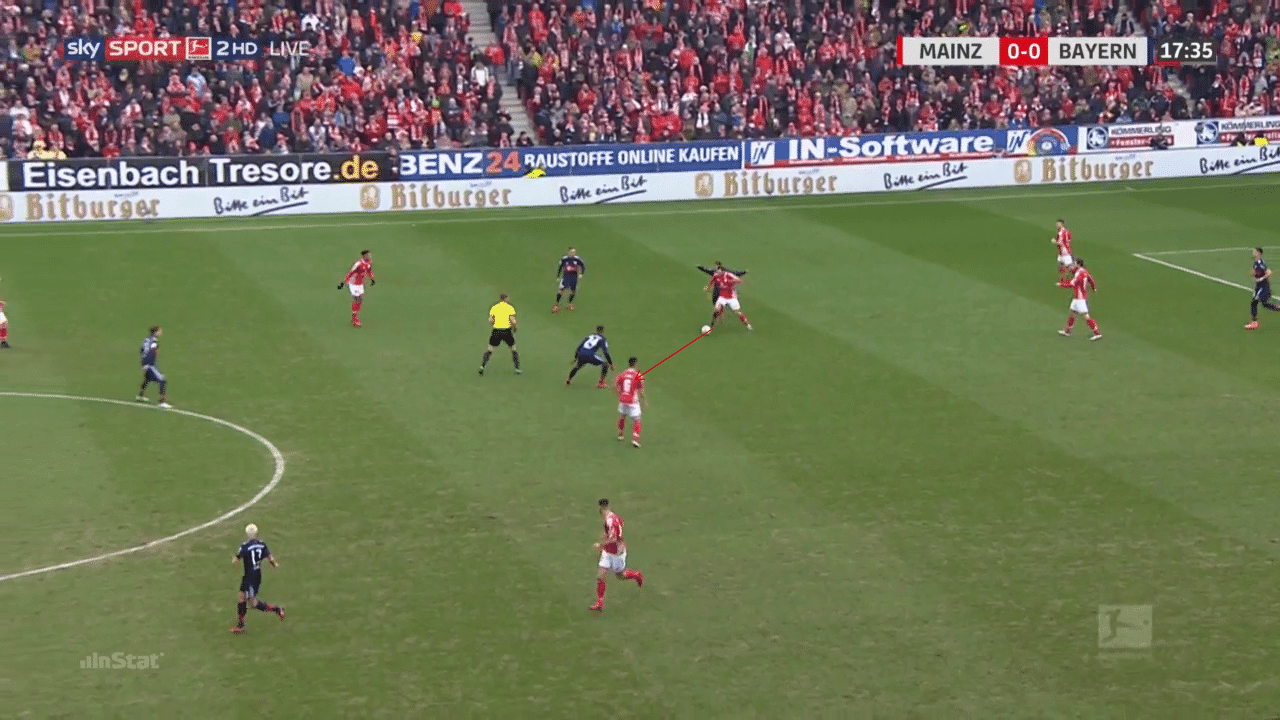 In another Bundesliga encounter, this time at home to Hannover, Rodríguez halts yet another counter attack in its infancy by capitalising on a poor touch from Felix Klaus to win the ball back for Bayern. 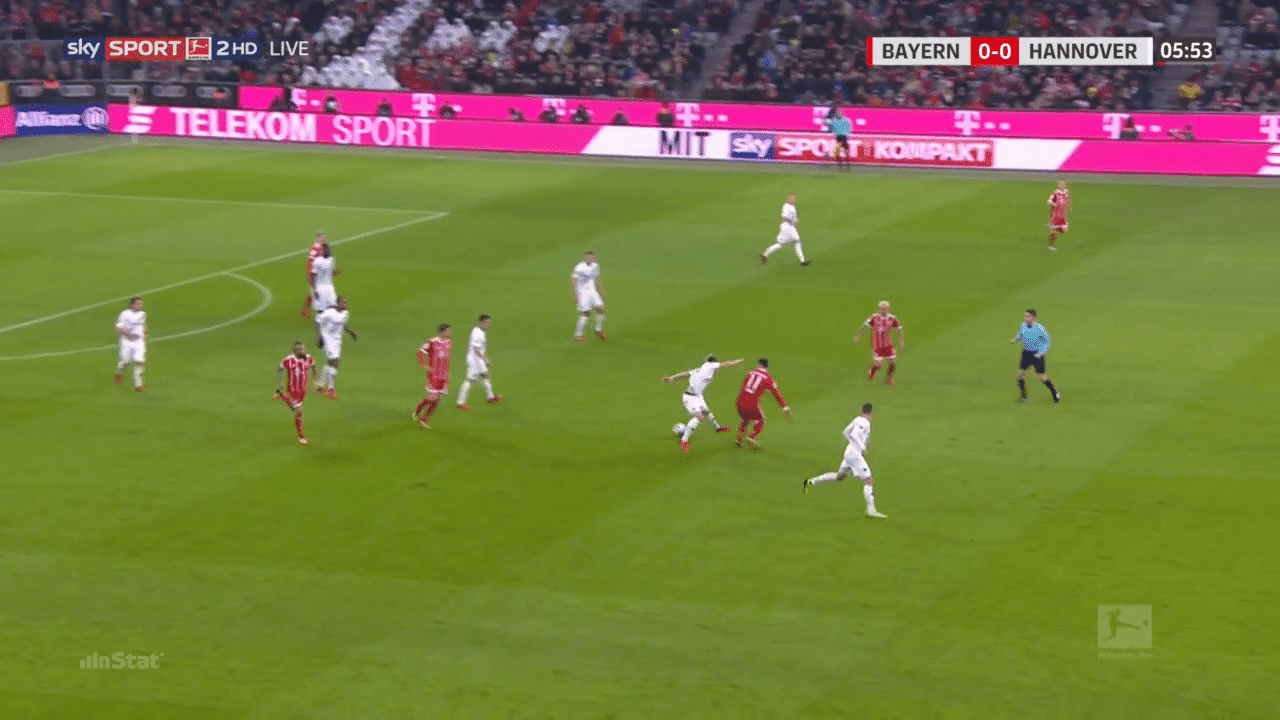 Perhaps the most impressive example, though, comes later in the same game against Mainz. Rodríguez had given the ball away seconds earlier. But he sprints back to slide in and win it back from Yoshinori Muto who is looking to slip the ball between Jérôme Boateng and Mats Hummels deep in Bayern territory. 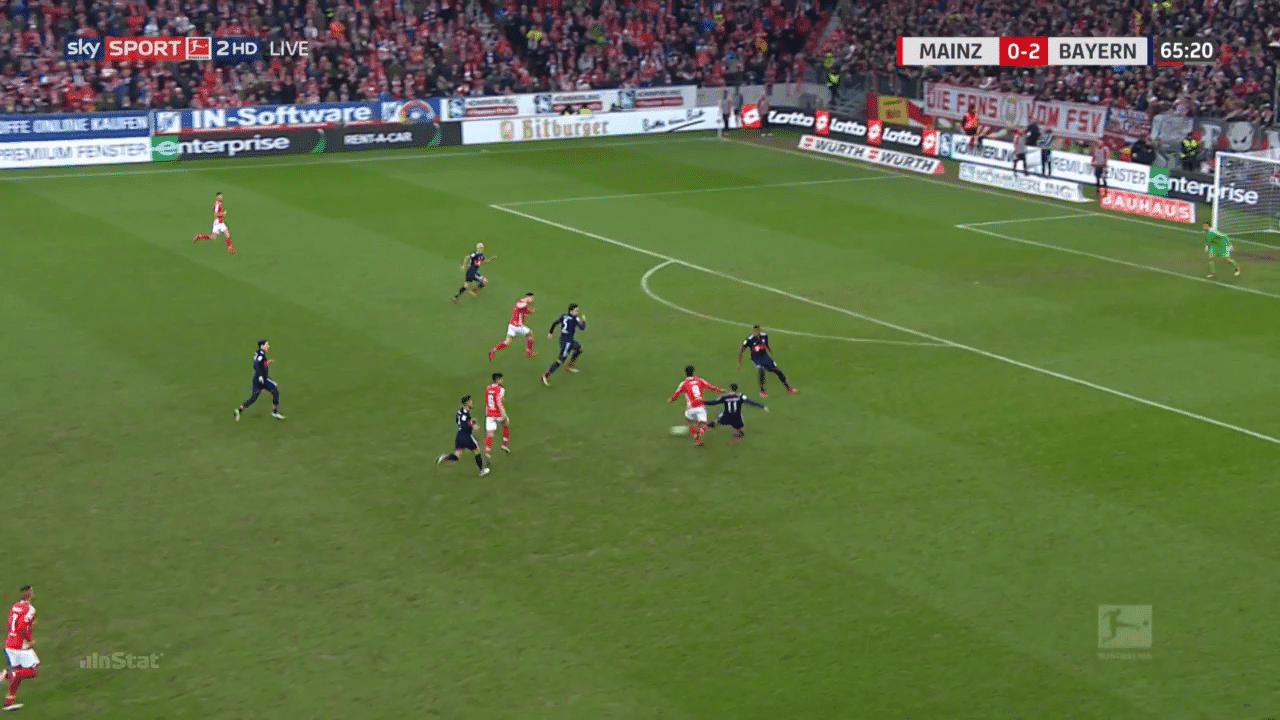 Perhaps the highest compliment Rodríguez can be paid is that his defensive efforts mean very few have missed Thiago during his prolonged absence.

One natural consequence of Rodríguez's deeper role under Heynckes is he is far less involved in the finishing aspects of the game. A cursory glance at his shot maps show that despite the same 2.3 shots per 90, the locations from which he takes them from have changed dramatically.

The shot map below, courtesy of Understat, shows Rodríguez’s efforts at Bayern while the second image is his combined shot map from three seasons at Real Madrid.

You can see that he rarely gets inside the penalty area anymore, with Lewandowski, Müller or Vidal hoovering up all those goals. Rodríguez has cut down on the speculative long shots, though and traded them for more efficient danger zone attempts.

It’s one of the reasons he is putting up an astounding 0.07 xG for shots outside the box – slightly better than Lionel Messi’s 0.06. The other noticeable thing is the absence of the purple dots which represent blocked efforts. They are few and far between and even the handful which remain are from much better positions inside the box.

Overall, per Understat, Rodríguez’s current xG90 (expected goal per 90) score of 0.21 is more in line with his first two Real seasons than his outlier 2016/17 campaign. Last season he picked up 60 per cent of his 5.65 season xG in wins against Leganés (4-2), Granada (4-0) and Deportivo (6-2) late in the campaign with Madrid putting up an xG score of four in two of the three matches.

In his final season at the Bernabéu he was often tasked with creating and finishing for Zinedine Zidane's back-up side, alongside Álvaro Morata, with 34 key passes from January to May of 2017 as the established members of the side went for the Champions League.

Under the guidance of Heynckes, who has referred to him as a ‘godsend', Rodríguez has turned into a more well-rounded midfielder at Bayern. His 90 per cent pass completion rate is a career best, with 57.4 per cent of his passes going forwards – more than any of his three seasons in the Spanish capital.

Despite the added defensive responsibilities, Rodríguez has still been the same creative force at Bayern.

He has already created 41 chances this season vs. 44 last year and with six assists – his xA (expected assists) is 4.32 – he’s maintaining his career 0.5 assist per 90 ratio. Besides those excellent numbers, a plethora of his key passes have been immensely pleasing aesthetically, underlining his vision and speed of thought. 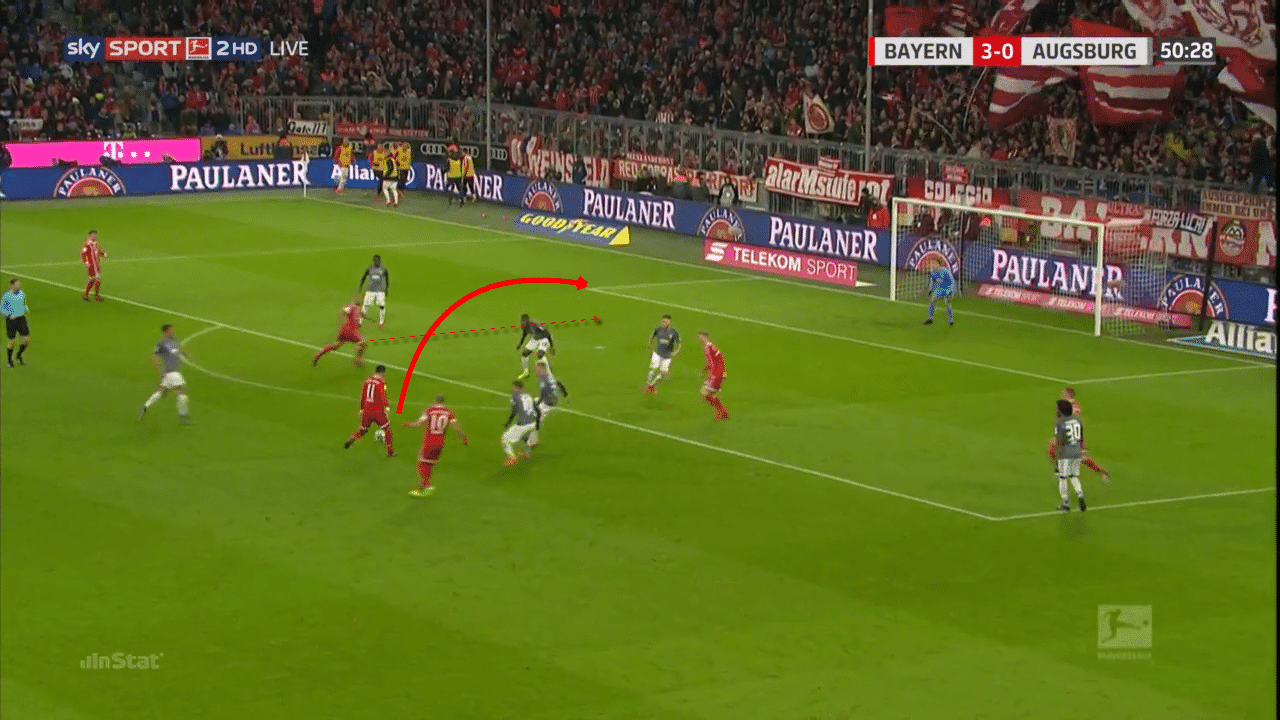 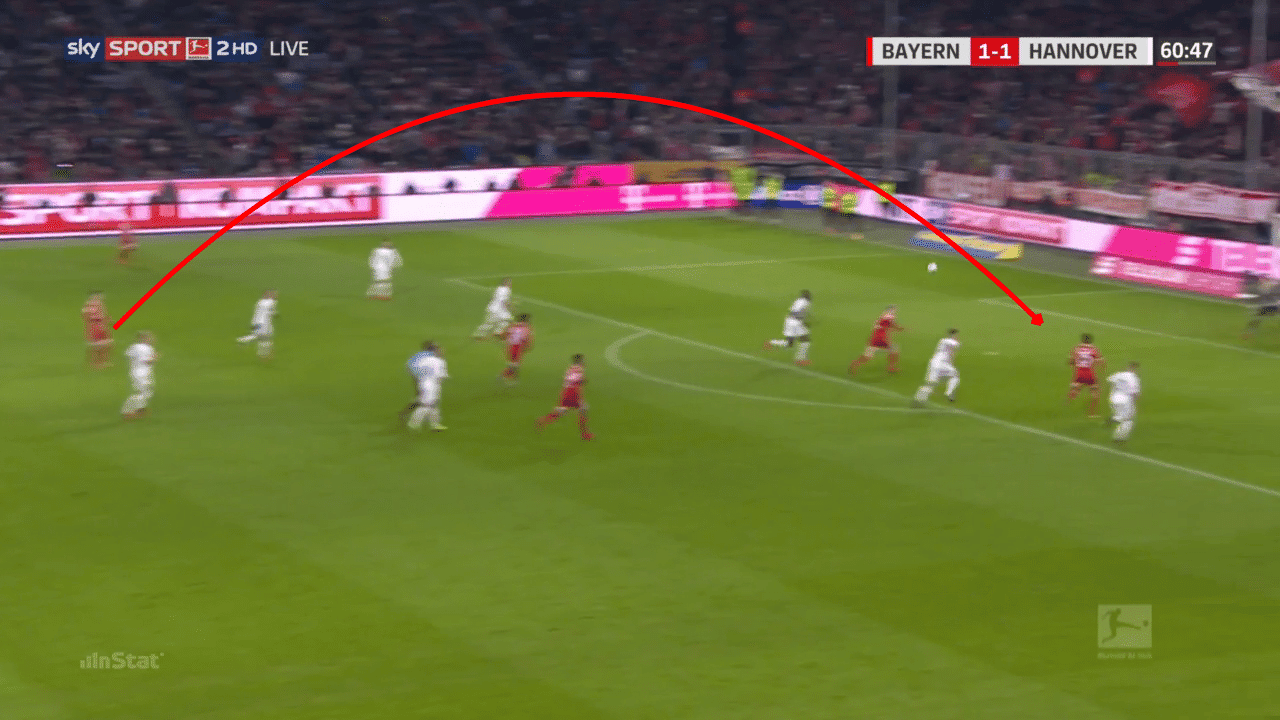 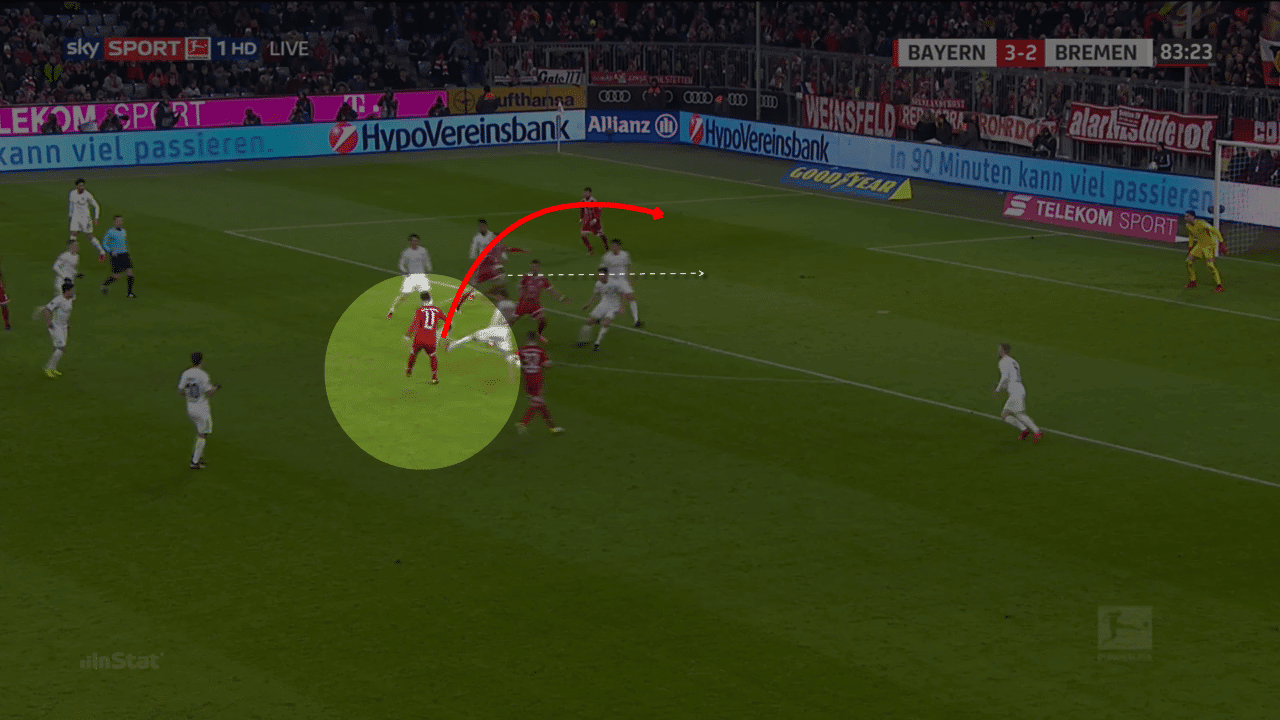 From those images, it’s clear that Rodríguez may be the best chip passer in world football. But giving him space to cross is also a spectacularly bad idea. His ability to recognise situations and his football IQ is almost without equal and, coupled with his charming personality, Rodríguez has taken the Bundesliga by storm.

What next for Rodríguez?

The future at Bayern is full of uncertainty. With the arrival of Leon Goretzka and the potential departures of Vidal and Thiago, there are changes abound in midfield.

In attack there is also a lot of speculation with Bordeaux prospect Malcom a Bayern Munich transfer target.  The young Brazilian could finally break up the Robben-Ríbery dominance of recent years.

Meanwhile, Lewandowski is flirting with Real Madrid and Serge Gnabry will return from his Hoffenheim loan to help out Kingsley Coman, who is out for the season.

Curiously, Rodríguez’s future is up in the air, too, though Bayern's leadership are slowly warming towards the idea of a permanent move.

The departing Heynckes has Henrikh Mkhitaryan a beneficiary from Tuchel's time at the Westfalenstadion.

The prospect of Rodríguez working under the former BVB coach is an enticing one, to say the least.