The more things change, the more they stay the same, the saying goes. At Arsenal that could not be truer – particularly in light of the Gunners' reported interest in James Rodríguez.

The Colombian schemer returned to Real Madrid in the summer after two seasons on loan at Bayern Munich. Los Blancos had hoped to sell the 28-year-old – if not to the Bavarians then to someone – in order to balance the books after a €300million summer refresh.

However, despite reportedly offering him to Paris Saint-Germain as part of a player-plus-cash deal for Neymar, Rodríguez remains at the Santiago Bernabéu where he has dramatically fallen down the pecking order amid an influx of new arrivals.

In truth, he was already bottom of the depth chart after being shipped out to Bayern for two years with a price already fixed should the Bundesliga giants wish to sign him permanently during that period.

But when Die Roten sacked Carlo Ancelotti in September 2017, Rodríguez lost his biggest ally in Germany, the coach he'd worked with in Madrid, who brought him to Bayern. Rodríguez finished his time in Munich with just 32 Bundesliga starts to his name and having spent much of his time at the club under Niko Kovač.

It was inevitable he would not make the switch permanent, although the numbers he posted during his time in the Bundesliga were impressive nonetheless.

His effectiveness as a creator won't have come as a surprise but what might is the fact no Bundesliga midfielder regained possession in the attacking third more times per 90 than Rodríguez (1.23). The former Porto star was a pressing machine.

Now he finds himself in limbo at the Bernabéu, caught between the old guard and the new. Coach Zinedine Zidane has thrown him a bone in the shape of four LaLiga starts. But there is no natural spot in the Frenchman's 4-3-3 system for Rodríguez who typically operates as a No.10 behind the centre-forward – even though he spent some time in Germany playing deeper.

It is the same at Arsenal and this is just one of the reasons links by El Desmarque are mystifying. Rodríguez, according to the Spanish outlet, is an Arsenal transfer target and while he's a fine player, he is not the player the Gunners need. 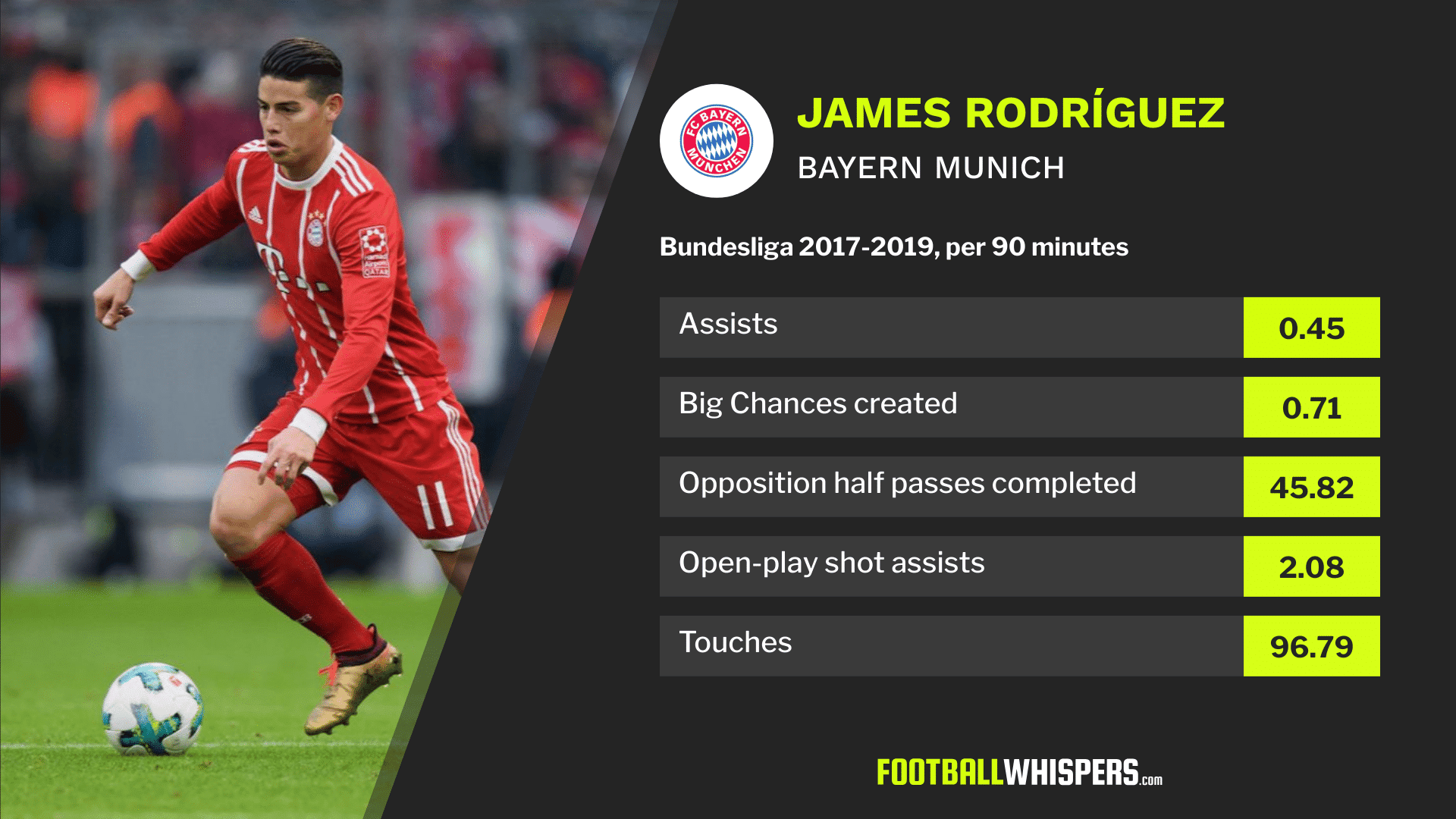 Indeed, Arsenal already have a No.10 that the now-departed Unai Emery couldn't fit into his starting XI on a regular basis. That player also joined from Real Madrid to, indirectly at least, make room for Rodríguez following the 2010 World Cup in Brazil.

We're talking, of course, about Mesut Özil. A divisive figure among Gunners supporters, the German international has been reintegrated into the side in recent weeks but only when Emery had tried everything else in a desperate bid to improve the Gunners' form and save his job.

Cramming a second attacking midfielder into an already front-loaded side which has to include Pierre-Emerick Aubameyang and Alexandre Lacazette, while trying to find room for Nicolas Pépé, would be impossible.

What makes these reports equally baffling is the allocation of funds. There are few complaints about Arsenal's attack – perhaps an over-reliance on Aubameyang but nothing major – as for the rest of the team, take your pick.

Arsenal are infamously leaky at the back, lack depth in the full-back positions, lack quality in midfield and leadership throughout. Spending a reported £35.8million on a player who wouldn't plug any of those gaps and wouldn't fit into the existing system is maddening.

In fact, it's the kind of thing Arsène Wenger would have done. Instead of concerning himself with the gaping hole in his team, he'd sooner add a sprinkling of stardust elsewhere. For too long it was a criticism of the Frenchman and, eventually, his stubbornness cost him the job he loved as Arsenal remained rudderless in the final years of his reign.

On top of all that, Arsenal have a young player who has played in the position Rodríguez would potentially fill and has impressed: Joe Willock. It was the 20-year-old who took Özil's place in the side at the beginning of the season when the former Germany international was given time away from football following a knife attack in London.

For all Emery's faults – of which there were many – the Spaniard was quick to give youth a chance and Willock, who signed a new long-term contract in December, has been one of the beneficiaries alongside Bukayo Saka, Gabriel Martinelli and Reiss Nelson.

Arsenal have made plenty of mistakes in recent years. Particularly when it comes to silky playmakers who are unwanted and unloved by Real Madrid, European football's most fickle and impatient side. Signing another of their cast-offs would only compound previous errors.