Given the group in which they’ve been placed, and their potential path through the knockout stages, Uruguay could provide a number of surprises during the is the youngest and arguably most talented.

The South American country has punched above its weight ever since it hosted the first World Cup in 1930, when it defeated neighbours Argentina in the final. With a population not much larger than Wales, the Uruguayans have always focused on football and won the tournament again in 1954.

In modern times Uruguay have boasted some of the best players in the world, but have been searching for a fresh injection of talent to compliment the likes of Luis Suárez and Edinson Cavani up front, and defensive stalwart Diego Godin at the back.

Bentancur was part of a promising under-20 side which finished fourth in the 2017 U20 World Cup, and the then Boca Juniors players made the move across to Europe to Italian giants Juventus having just turned 20.

He was part of a deal the Serie A champions had with the Argentine club which saw Carlos Tevez move back to his hometown and first professional team. The transfer deal gave Juventus the first option on on a number of Boca youth players, and they chose to activate this clause for Bentancur.

Though he’s the youngest player in the Uruguay squad, he’s one who plays for one of the more high profile European teams. This means he has already experienced Champions League football, and has a league title to his name.

Juventus may have seen him as the replacement for Paul Pogba who left for Manchester United in 2016. He is a rangy midfielder with the ability to work box-to-box, and one who has the natural gifts to create space in midfield and feed the forwards.

He completed 88 per cent of his passes in Serie A last season, and in the Champions League he managed an average of almost two interceptions per game, which shows he can work on both sides of the ball. In terms of long passes, he completed 79 per cent, which is an impressive return in this area. 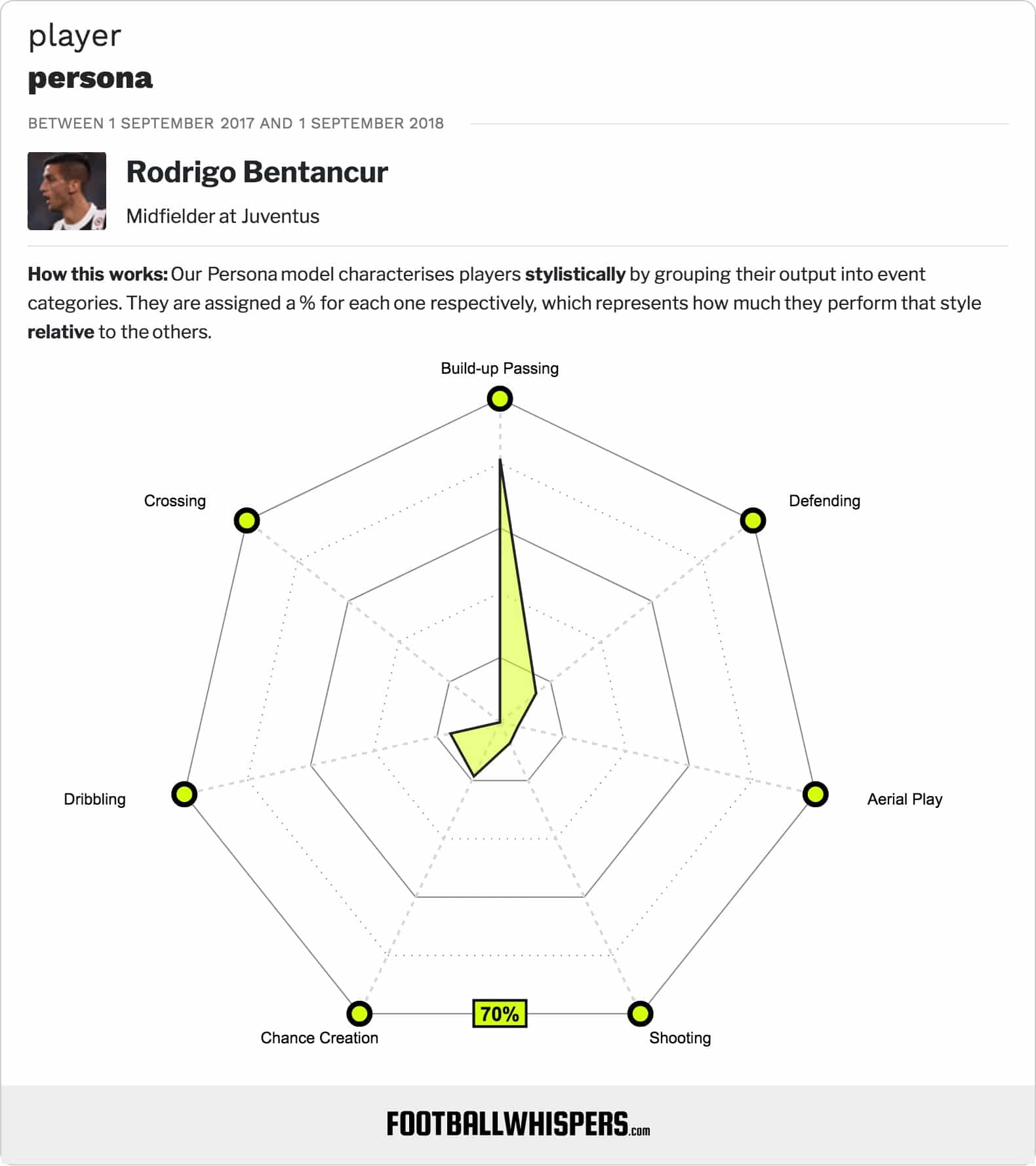 Speaking of work, Bentancur will put a shift in and, along with his 6ft 2in (187cm) frame, this makes him a key part of midfield in both attack and defence. He wins around two aerial duels per game in the centre of the park. Add to this the fact that he’s decent with both feet, and you almost get the complete midfielder.

Almost, because he has some work to do in the defensive department, especially when it comes to composure when tackling, and he given his skill he should also be making more of an impact in the final third.

Though his midfield play is excellent when it comes to picking up passes in space, and in turn finding his team-mates, he could be a touch more incisive, begin to make more key passes, and contribute with the occasional assist from deep areas or otherwise. He registered no assists last season, and around one key pass per 90 minutes.

This will come with more game time, though, and the lack of key passes will be down to a combination of his position in the side, and the fact he only played 859 minutes in the league and in Europe last season. Although, at his age, and as a player coming straight into such a big side from South America, it’s testament to his quality that he’s getting minutes at all.

For Uruguay he might be more settled, and if they progress deep into the tournament Bentancur may show his best football yet.

With the national team he’s part of a project which was put in place by long-serving manager Óscar Tabárez when he began his second stint in charge of his home nation way back in 2006.

It was named ‘Proyecto de institucionalización de los procesos de las selecciones nacionales y de la formación de sus futbolistas’. It has since been shortened in media circles to El Proceso, or in English, The Process.

This is Tabárez’s 13th year in charge, meaning that his original idea to bring Uruguayan national teams together, from under-15s through to the senior side, at the Complejo Celeste training centre, has had plenty of time to flourish.

Bentancur is just the latest product of The Process, and he, along with several other players, are beginning to refresh this Uruguay side. This new blood provides a platform for the senior players and finished articles Suarez and Cavani, who began this process when they were given their debuts by Tabárez in 2007.

Bentancur will wear the number 6 shirt for Uruguay at the World Cup, which is an early indication of his importance to this squad. Should his side go deep into the knockout rounds, then he could be up for the best young player award come the end of the tournament.